Our community, our humanity; our ancestors, elders and children; our poets and artists from across the Diaspora: All were brought together on Dec. 6 for the sharing of “Incantations and Rites” with the Daughters of Yam, with Destiny Muhammad, “Harpist from the Hood,” and with the hood itself. Our focus was on the issues of our Black young men being assassinated in the streets through violence both instigated and taught by enemies, Willie Lynched against ourselves and, from a violence template centuries in the making, engineered and performed as in a horrid travesty of a play against life, by the assassins that spawn organized, state sanctioned, police-state brutality.

At the behest of a militarized country, through the intent and design of genocide, in an age gone mad-delirious with its foci on greed and money, a murderous state entity delivers its terrorism internally and exports it outwardly to other lands and humanities in a vain attempt to preserve itself against the rage of humanity that its millennia of debauchery have engendered.

The Daughters of Yam, devorah major and Opal Palmer Adisa, poet Teju Adisa Farrar and Harpist of the Hood Destiny Muhammad gifted life affirming poetry into the air, lifted it off the pages of their book, “Incantations and Rites,” placed it in our hearts, and planted seeds of wisdom, re-affirmation, healing and liberation in our souls, affirming our own Afrikan spirit of resistance.

We were brought together by the provocative and compelling need to examine problems, find solutions, and ignite and keep resistance strong on all of our creative levels. They poured libations, shared blessings for our loved ones, lost and not, and played music that went softly into the soul and began the uplifting of the evening. In perfect call and response, the incantation blessing began, and we were educated as to the what and why of the ritual, which is important for those of us who do not know:

“We sprinkle salt/ Because as they say in the Yoruba tradition/ It sweetens the struggles of Life/ We pour honey/ So that we never forget, no matter what/ There are always drops of sweetness within one/ And we float these flowers/ For those who are past/ As well as for those who are/ Meeting them, and/ Have yet to be born.

We examined and re-affirmed the roots of the tree, our origins, our Afrikan selves and our humanity with an indispensable weapon. And we came away with our souls repairing and generating disconnect from the monster and a reconnection to ourselves and all that we are – and all that we will fight to protect and to grow: more beautiful today than yesterday, more beautiful tomorrow than today.

We added to a building momentum, fighting the grip of the blood soaked arms of state sanctioned terrorism that attempts to drag us down into soullessness and despair.

This was the strongest part of the event: Four strong, powerful women brought together everyone in the room, all of our ancestors, all of the global hood – everyone. They stirred and blended and re-affirmed and re-aligned the universe and replanted the seeds of how to annihilate terrorism against us and planted from within our own selves.

There were poems of love such as devorah’s “Symphonic Man” for her husband, Gregg, and Opal Palmer Adisa’s “The Sea in My Ear” for Brian Bishop; poems of declared and undeclared war such as devorah’s “Resisting Genocide,” written for Alan Dwayne Blueford, and Opal’s “Urban Death Altars,” honoring those who have been killed – and honoring them when they were alive; “Rites” and chants honoring life, hope and a new day; and the beautiful music of Destiny Muhammad that has a life of its own.

The entire show was two hours, five minutes and 43 seconds of richness. I taped all of it, and I play it when I need to feel the positive creativity of that evening and the calming peace that came over the room.

When the poetry and the music began, it was a balm, not of apathy and accusation, but of strength in the face of tragedy; it was a healing, imparting the how to face the harbingers of terror and come out whole, intact, and able to grow, to build, and to win.

It was the sort of healing wisdom that fosters independence of mind, and community of spirit, determination of body, and unity of will towards the liberation of an entire people. It worked to ignite and keep our resistance strong on all of our creative levels; poet, musician, artist, photographer, photojournalist, guerrilla fighter, health worker, spiritual teachers and healers, health workers, farmers, and griot… Whatever it is that we do.

Then came the surprise of the evening, Teju N. Adisa Farrar, artist, published author and guest poet, introduced by her proud mother, Opal Palmer Adisa. Teju’s website says, “Do what makes you happy so you won’t have to do much else!” She is “energized by global content, communities and urban development; believes in using a multitude of culturally relevant mediums to create engaging communities and social impact and encourage diversity and global awareness; and has been active in the realm of social advocacy with issues such as HIV/AIDS awareness, youth empowerment, sustainable lifestyles and four startups.”

She is also “particularly excited by global companies that use innovative strategies to impact and address socio-cultural issues. As the founder of World Unwrapped, launched in June of 2014, Teju is reinforcing the idea of global communities, content and awareness.”

This night, she reminded us that the youth of this world are awake, aware, and up on current events and issues. They know that all over the world Black people and Black young men are subjected to violence, they know from whom that violence originates, and they rage against it in determination to win against the machine that “keeps shooting us dead.” She gave us a slice of her BA degree in realism, with a dash of sociology and political critical theory thrown in as she introduced us to her thoughts:

“A couple of months ago, my sister and I were talking about how we could get my brother not to go outside – at all – because of all of the things that had been happening for years and years, especially with Ferguson. And we were like maybe he could work from home, even though he is a soccer coach, or if he could only drive at certain times. I mean we were really trying to figure out how he should hide inside because we were so worried that if he got in his car to go to his job, something, anything could happen.

“And that’s crazy in 2014, my sister and I were worried that my brother, who goes about his life and works and goes to school, is going to get shot from stepping outside his house. I think that’s completely crazy and it’s not new. So this poem I wrote about Ferguson, but it’s about all of America and all of the world because all over the world, Black people and Black young men are subject to violence.”

Her words totally resonated with me – that this young adult who is probably less than a third my age is feeling and expressing something that I’ve felt and experienced, seemingly forever, repeatedly. Particularly when police raids happen right next door to my house, and the OPD turns my entire street for several square blocks into a police parking lot.

They bring their dogs and their skip tracer-bounty hunter-skinhead death dealer-hunters, whom my ancestors termed pater-rollers, to steal a young Black man away, after tearing up the house of his loved ones, throwing him, them and their meager belongings into the street for voracious landlords to use them as cannon fodder and tell them to get out. Police drive around like crazed, maddened beasts, looking for anyone to hurt.

Then I’d be calling all of the youth I knew who might stop by and telling them to STAY INSIDE. Do not go out for pizza, beer, to take a piss, to see yo patna’s friends, girlfriends etc. STAY INSIDE. The monsters are roaming, call me if need be, but stay yo asses inside. I don’t want to lose any of you today. I’m fine, don’t worry about me, but it’s pigs by the truckload over here and none of you need to be here.

Oakland, you see, is notorious for profiling young Black men by refusing to rent to Afrikan women who have young sons over the age of 3 or 4. They are profiled immediately as a threat, and if you get the place, your rent is sky fucking higher than a white person’s with sons plural would be.

So the opening words of this strong young woman resonated with me on some deep levels. This is her poem, untitled but yet titled, about Ferguson – and so much more.

“Ferguson is not one, it is many/ From strange fruits to jazz and blues, constant/ Bloodshed on the pavement, sidewalks – side walked/ By big shots with side stares, fear…He looks suspicious? Who decided that diction could justify six bullets? Or even one?/ In this world of many, Ferguson is just one

“Keep shooting us dead/ Keep calling us threats/ Keep trying to pretend that this is/ Not about racism/ It is race living, or rather my race dying/ Black on Black is crime/ White on Black is fine/ But the victims still have Black skin/ Brown skin, broken skin/ Pierced and punctured by legacy/ Created value/ But devalued by history,

“This whole country is Ferguson/ And if we can’t admit that, then/ Let’s re-write the Constitution/ Justice, tranquility, welfare, liberty; Only in theory

“I’m scared for my older brother/ He walks outside, he drives/ He lives, he works, he doesn’t hide/ But why should he? Why do I want him to hide? Land of the free/ Who does that apply to?

“From enslavement to Jim Crow to civil rights to still fighting policemen; We. Are. Still. Fighting. Policemen?

From enslavement to Jim Crow to civil rights to still fighting policemen; We. Are. Still. Fighting. Policemen?

“Fighting those who are supposed to protect us and serve us/I am scared for my younger cousins/ They are Black boys becoming Black Men/ Should I be scared that someone might take that from them? Do good, do bad, you still might/End up laid out, laid down/ Like this

“Skittles, college, valid license/ It doesn’t matter/ In their eyes we’re still/ Under nooses/ New sets of no sense/ Of dignity/ We built this country and/ Still we are still the enemy/ Ferguson is one out of many/ And there will be more and more/ And more and more/ Until we change this/ Not one but all of us/ Not one but all of us/ Must rewire the consciousness of this Nation/

“Until in every version of this story, we live.” That was the particularly poignant statement, the best direction toward liberation and the most important part of the evening, emphasizing that it takes a movement to bring change. Thank you, Daughters of Yam, Teju Adisa Farrar and Destiny Muhammad.

“Even the smallest victory is never to be taken for granted. Each victory must be applauded, because it is so easy not to battle at all. To just accept and call that acceptance inevitable.” – Audre Lord 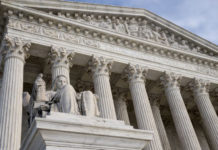 The ‘howl’ of justice

Protesting police murder of Alan Blueford and war on Afrikans