T-Rydah, one third of the Black Panther Fugitives rap group, is gearing up to release a solo album, produced solely by Jamil, another member of the group, this spring called “Hard Times/Good Times.” The Fugitives was founded by the group members as well as the former Chief of Staff of the Black Panther Party David Hilliard and his son Doreen to speak to some of the issues facing Black and oppressed people today. In the early 2000s, they dropped two albums. Today you can find T-Rydah, Jamil and their Red Camera shooting videos, recording vocals or listening to some of Jamil’s beats. Check out T-Rydah speaking for himself.

M.O.I. JR: Can you talk a little bit about how you got into Hip Hop? Who did you listen to back then?

T-Rydah: Wow, this is history. Well, I got into Hip Hop in the mid ‘80s, due to this being music that a young ghetto boy could easily relate to and needed. Growing up in the Acorns (Acorn projects) in West Oakland, you need anything to keep you from falling into the pressures of running the streets, and trying to bust raps was one of them.

M.O.I. JR: Who made you want to become a rapper? When was that?

T-Rydah: A lot of things made me want to rap, but if I got to pinpoint it, I would say Eazy E. I can remember getting the “Eazy Duz It” LP and I would bump that shit like every day, not even tripping off the explicit words he was using, because we all believed he was as young as we were, and was going through some of the same things we would see living in the projects, hood, ghetto etc. So about ’88 or ‘89 is when I really thought I could do it .

M.O.I. JR: How did you become a member of the Black Panther Fugitives?

T-Rydah: Well, a childhood friend, my dude Maja Gutta put me in the mix with one of now my closest friends and business partner, Mr. James Calhoun, who is one of the only children born into the Black Panther Party. He introduced me to David and Doreen Hilliard, who formed the Black Panther Fugitives in 2002 to bridge this history with the masses who forgot about the struggle that paved the way for the rights we so freely have now, like music and how we can speak it the way we want. 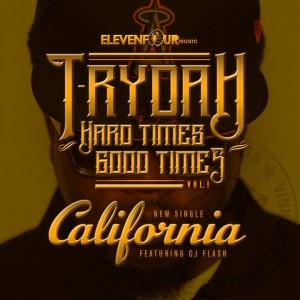 M.O.I. JR: What made you start doing your solo thing?

T-Rydah: My love for the art and my desire to make change in society is strong and sensible enough to make change or focus attention on issues most rappers like to sugarcoat around or shy away from these days, due to the corporate giants that have watered down the creation we used to call our own.

M.O.I. JR: How long have you been working on your solo album? When is it coming out?

T-Rydah: This has been a long process compared to how they just throw garbage out now, with the fast moving social media world we live in. We have been at this one for about three years too long, but good things come to those who wait, and the cooking is always better when ya slow cook.

M.O.I. JR: What is it like working with your comrade Jamil from the Black Panther Fugitives on the project? What is y’all’s creative process like?

We know how to build and keep a winning program. Only thing now is winning the title or at least going gold, with this “Hard Times/Good Times” project.

M.O.I. JR: How can people keep up with your movement?

T-Rydah: They can follow my T’Rydah fan page on Facebook or visit T-Rydah.com, which we are continuing to improve on.