Canadians in 50 cities protested Canada’s pending Anti-Terrorism Act of 2015 Saturday. The legislation would sweep all the enemies of Stephen Harper’s Conservative government into one big tent labeled “terrorist.”

KPFA Evening News Anchor: Canadians gathered in 50 cities across Canada today to protest pending legislation known as C-51, or the Anti-Terrorism Act of 2015. The bill passed its second reading in the House of Commons in late February, and the government of Conservative Prime Minister Stephen Harper is now rushing to pass it with minimal debate.

Retired Professor Michael Keefer was among the bill’s critics, and wrote that it “subverts basic principles of constitutional law, assaults rights of free speech and free assembly” and called it “viciously undemocratic.” KPFA’s Ann Garrison spoke to Michael Keefer.

KPFA/Ann Garrison: Professor Keefer, I read this bill and it’s so vague that it seems like it would just give a lot of prosecutors a lot of discretion to charge Canadians with terrorism, however they choose to define it.

Professor Keefer: That’s exactly the purpose. The purpose is to find a terrorist under every bed. In particular, to enable the government to send its secret police after defenders of Native rights, activists on environmental issues, people who have concerns about the dangers of the Alberta tar sands, the dangers of foolish pipeline developments across the country, the dangers of fracking, which is going on from East to West, from New Brunswick to British Columbia. And finally it’s aimed at silencing supporters of the rights of Palestinians.

KPFA: I’d like to play one of the more puzzling exchanges about the bill in your Parliament this week, between Randall Garrison, a New Democratic Party MP from British Columbia, and Stephen Blaney, your public safety minister from Quebec.

French/English translator: I will answer in French. Violence starts with words. Hatred begins with words. I could talk to you about the Rwandan Genocide. That began on the radio and contributed to a horrible genocide. A former senator here even suffered mental health issues because of that. Let’s call a cat a cat.

Rhetoric, discourses that are against Canadian values, hate propaganda has no place in Canada. And as a government, the time has come for us to take our responsibilities and not tolerate the language that is disrespectful, violent and hateful that we’ve been hearing. This is what this act allows us to do, so I maintain my statements, what I’ve said, and I would repeat that the Holocaust did not begin in the gas chambers. It began with words.

KPFA: OK, the MP from British Columbia called this inflated rhetoric, but to be inflated or exaggerated, you have to make a bit of sense in the first place. Can you help us understand what the Holocaust and the Rwandan Genocide might have to do with fighting terrorism in Canada?

Professor Keefer: Strictly speaking, it has nothing whatsoever to do with it, but this is a government that would make Karl Rove blush. These are people who crawled out of some kind of neo-conservative cage. And they are, among other things, fanatical supporters of Benjamin Netanyahu’s policies and Israel. 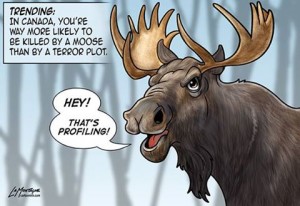 So, for example, just a couple of months ago, there was a memorandum of understanding signed between the Canadian government and Netanyahu’s government which states, among other things, that, and I’m quoting, “whether the fight against violent extremism is conducted over the skies of Iraq or in the tunnels under Gaza, Canada and the state of Israel are fighting enemies whose hateful ideologies and goals threaten all peaceful democratic societies.”

Now, Blaney sounds even odder in translation, I suppose, than he does in his native Quebecois, but he is a political extremist. And part of what this bill is intended to do is to silence any kind of activism that is opposed to the geopolitics of Netanyahu and the state of Israel.

KPFA: That was Canadian Professor Michael Keefer on the Canadian Anti-Terrorism Act of 2015. Keefer said that Prime Minister Stephen Harper’s Conservative majority in Parliament virtually guarantees that the bill will pass but that it’s important to protest and educate the public about just how bad it’s going to be.