Robert “Fleetwood” Bowden’s “Da Cotton Pickas” is a must see documentary about how slavery did not stop with the Emancipation Proclamation. In fact, some people who were sharecropping slaves are still alive today, like Bishop Henry Williams, the subject of this monumental documentary. He worked for over 18 years and was never paid for picking cotton.

Fleetwood tells a story of a historical reality with this documentary that most have never heard. On April 4, from 12 noon to 2 p.m., at Geoffrey’s Inner Circle, 410 14th St. in downtown Oakland, you can see this documentary at the Oakland International Film Festival. For more info, go to oiff.org. Check out Fleetwood in his own words. 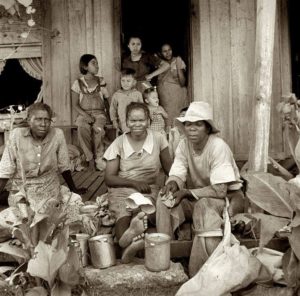 M.O.I. JR: Can you tell us where you got the concept for the “Cotton Pickas” documentary?

Fleetwood: I grew up in the Bay Area and North Carolina. At a young age, I understood the migration of my people from the South. I knew that no slave ships came to New York, California, Chicago or Detroit, so I wanted the youth of today to understand why they have cousins down South and why?

My hope is to help them understand where they were from, so they could visualize where they need to go and how they are going to get there.

M.O.I. JR: How long did it take to create this film?

Fleetwood: The duration was three months. From my first doc film, I discovered the formula, so this process wasn’t that hard, but it was very important that I had the origin of the content needed to capture our history during this period of Black America.

M.O.I. JR: What do you hope people get out of this film?

M.O.I. JR: How did you come across the subject of the film, a man who picked cotton for 18 years and never got paid?

Fleetwood: Actually I put the word out, and my Uncle Mike Brown, founder of Inner City Youth, told me he had a friend who actually picked cotton, Bishop Henry Williams. It was such an honor. As the film was being made, I quickly realized that I was making history with the project and also touching history by being in the presence of Bishop Henry Williams.

M.O.I. JR: How did it feel to get selected to be in the Oakland International Film Fest with your new documentary?

Fleetwood: I’m extremely honored. This is the second year in a row with my second project. I honestly never saw this coming. I must say this ain’t my doing; it has to be God. I’m not that powerful. I will forever be indebted to David Roach and his staff for this opportunity.

M.O.I. JR: What is the plan for “Da Cotton Pickas” documentary? How do you plan to distribute it?

Fleetwood: With God’s will, “Da Cotton Pickas” will become a powerful educational truthful series. Every year during Black History Month, I will release a new version – a perspective on the plantation, on the sharecropping period of Black America.

The next installment in 2016 will focus on reparations. I’m actually heading down South in September to get the perspective of white slave and plantation owners on this subject. I want to let America hear what they’ve got to say also.

And as for distribution, right now as an emerging filmmaker, I’m learning the game, looking to connect with the right people. We are looking at all opportunities from online digital distribution to cable broadcasting that will allow us to touch the world with this project from PBS to HBO and the list goes on.

Until one of them comes through, I will be hitting the road across America embarking on putting together youth empowerment and ex-offender workshops city to city, with both my films being the centerpiece of the presentations, in hopes that someone will recognize the genius of what we have been blessed to do and help us get it to the world. I know this doc film will end up in Africa helping to build a bridge of understanding between Africans and African Americans.

M.O.I. JR: You recently were at the South by Southwest Music Festival. Did you show your documentary? If so, how did they respond?

Fleetwood: We actually missed the deadline, but my Bay Area hustle was on official grind mode the whole time I was there. I did 17 interviews total and also made an appearance on MTV and left there with more connections than an extension cord. True story.

M.O.I. JR: When does “Cotton Pickas” screen at the Oakland International Film Festival?

Fleetwood: We will be at Geoffrey’s Inner Circle April 4 from noon to 2 p.m. in Downtown Oakland.

Fleetwood: You can reach me at fleetwood_189@hotmail.com, on Facebook at Robert Bowden, on Twitter @fleetwood189, on Instagram @fleetwoodsf. Also go to DaCottonPickas.com to view the movement. Thank you, my brother, and God bless you all. Please remember, like grandma said, “Nothing will work in life if you don’t.”