A review by Wanda Sabir

The venue was full on a Thursday evening, so was the BART on the way back home … so I don’t know what was happening this weekday night, but obviously the city was alive, people actively engaged. Majority women in the house, there were a few stalwart men who stand with women locked up inside the prisons and jails and other custodial units which foster anything but rehabilitation and justice. 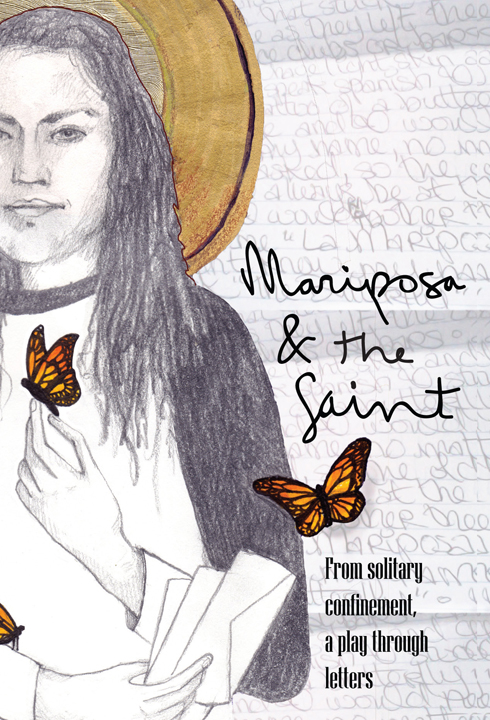 A fundraiser for California Coalition for Women Prisoners, Sara (Mariposa) Fonseca and Julia Steele Allen’s “Mariposa and the Saint” is a play created from correspondence between an inmate in solitary confinement and a volunteer with a CCWP visiting team who became Mariposa’s friend. From 2012 to 2013 the two women began writing the play and, despite the literal barriers in place to thwart such relationships, they push through it all to forge a strong friendship evident in the powerful story shared in the completed work, 2013 to now.

Dressed in a prison jumpsuit and sandal flip flops – prison chic – Mariposa, whose alter ego is named “Saint,” shares her sad yet powerful story with us. It is amazing how Mariposa tries to hang onto her dignity and positive outlook when her 15 months in the Security Housing Unit grows into three years, then her parole date is highjacked while within sight.

She speaks about the suicides and the systematic way the prison officials have normalized despair. Mariposa says that even if she doesn’t know the women’s stories locked up with her, even if she is not on speaking terms with all of them, they are all her sisters suffering the same indignities as they each try to hang onto their sanity and humanity.

Co-writer Julia Steele Allen presents “Mariposa” with humor and dignity. We watch Mariposa win repeatedly when the isolation gets harder to bear, likewise her sanity harder to hang onto. There are moments when Mariposa speaks directly to the audience about finding herself locked up, her children taken from her.

She speaks to us about what she misses, like the feel of wet grass between her toes. She then asks us, what would we miss? We even recite a poem she composed and sing together towards the end of a dense 45 minute performance.

The idea of family is impossible for a prisoner in the SHU. They can have no phone calls. Solitary confinement is a place without sunshine. The cell shrinks and with it one’s soul.

Solitary confinement is a place without sunshine. The cell shrinks and with it one’s soul.

We are not clear why Mariposa is serving so much time. Nonetheless the teen mother, and young adult prisoner – 32 when we meet her, 20 years already served – gets no breaks. A Native Californian Indigenous woman of the Mi’Wok Tribe of Northern California, she suffers from the historic vestiges — colonialism and genocide.

Sara Mariposa Fonseca, who is still locked up, now in a unit for prisoners with mental illness, has found the Saint once again. She asks her captors, when she learns that the 15 months have been extended to three years, how she is to prepare for life outside if she is not allowed an opportunity to gain work skills?

Silence greets this plea as the gears turn, the dispassionate and dehumanizing routine is played out on stage day after day, month after month, year after year. Mariposa reminds herself that she taught herself to read behind bars; she writes letters in her mind to her son; she recalls her daughter and sings to her; she retraces her steps to prison to see if she could have made better choices.

Two performances benefit CCWP. Visit womenprisoners.org or call 415-255-7036, ext. 4. CCWP was founded by women inside as an advocacy vehicle 20 years ago to demand better healthcare, a need that continues to dominate the list.

There were members of CCWP at Stagewerx Theatre in San Francisco who led the audience in conversation and testimony. There were also petitions and bills announced that people were asked to support, one a petition signed by women inside demands “the restoration of urgent mental health care to people in secured housing units.”

This unit forms the philosophical and actual setting that “Mariposa and the Saint” is based on. The set uses bricks made from cardboard boxes covered in gray material to represent the cell. Mariposa speaks of how when she first lands in solitary confinement, she spends significant time cleaning her cell.

Mariposa never leaves the cell, except to take a shower – and that is not daily. The food is handed to her through the bars or slot in the door. For company she stands on a chair and talks to a woman in another cell through the air vents.

Each letter she receives is first read by the institution represented by the masked, uniformed guard. Many times, when one thinks about the California Department of Corrections and Rehabilitation (CDCR), the people who run it are absent. And while the masked character – actor Zack Wymore, who in uniform represents the state sanctioned institution which dispassionately seeks to dehumanize its captives – has a level of anonymity, he is nonetheless specific enough to hold accountable for its misdeeds and injustice.

“Mariposa and the Saint” personalizes what one hears or reads regarding civil rights and legal rights for prisoners. After the performance, this often inaccessible idea is grounded forever in the body – Sara Mariposa Fonseca’s, as portrayed by Steele Allen, and in turn the audiences’. At many points as already mentioned, we are one.

When Mariposa tells us about how she gets four more years when she throws water at a nurse or when we see the photo of her daughter, whom she never saw after birthing her, a child who does not know her mother’s name – we are changed. This is not a journey for the fearful or for those who love darkness – “Mariposa” is enlightening.

It is great CCWP is present literally, because those so moved have a vehicle to join which addresses the inequities faced by Mariposa and other women inside California’s many prisons or places of legal captivity.

Incarcerated women have needs specific to their gender. We see Mariposa bent over in pain after her newborn is taken from her. Bleeding and leaking milk, she finds no solace or support from the institution – which ignores her cries for help.

We see Mariposa bent over in pain after her newborn is taken from her. Bleeding and leaking milk, she finds no solace or support from the institution – which ignores her cries for help.

Sounds really hard to witness? It is, yet there is humor in the letters and this is translated into the work. Even when Mariposa, 17, a young mother without housing, tries to sell her body to take care of herself and her son, there is a level of honor or integrity involved here that does not go unnoticed.

I would have liked to know more about what happened here and what happens that lands Mariposa in solitary confinement once her “wife” is released. What happens to the baby birds the two women rescue? Mariposa speaks about dying multiple times; what revives her? Where does the love come from that allows her eyes to open daily?

The prison will not let Steele Allen in to see Mariposa since the play was written; however, Colby of CCWP spoke to Sara Mariposa Fonseca recently and shared her message with the audience opening night.