On May 20, 2015, the Du Bois Review published “Racial Inequalities in Connectedness to Imprisoned Individuals in the United States,” a groundbreaking article exposing the devastating effects of mass incarceration on the women who are so often left behind to pick up the pieces. The article was co-authored by Hedwig Lee and Tyler McCormick of the University of Washington, Seattle; Margaret T. Hicken of the University of Michigan, Ann Arbor; and Christopher Wildeman of Cornell University. 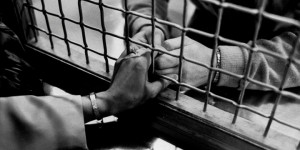 The article reports that one in four women in the United States currently has an imprisoned family member. “Family members” include male and female relatives such as aunts, uncles, and cousins, as well as children, partners, and parents. It is important to note that this analysis focuses only on people serving sentences in prison, and not those in jail. Had the article included people in jail, the number of women affected by family member incarceration would be much higher.

While the racial inequalities are striking, the number of women overall affected by the incarceration of family members and loved ones is staggering. The study makes clear that women in the United States currently have unprecedented levels of connectedness to people in prison.

With men making up 90 percent of the 2.2 million people currently incarcerated, women who have incarcerated loved ones are often left raising children, managing family finances, and facing stigma in their communities and workplaces. As a result, these women are at greater risk for a whole host of harmful health and economic outcomes.

As Anita Wills, a member of Essie Justice Group, explains, “In 2003, when my son Kerry was sentenced to 66 years in prison, I was devastated. I had to keep it together for my son and grandsons. I am now 68 years old and raising my 17-year-old grandson. This is not how I envisioned living my retirement years.”

Terryon Cross, whose father is in prison, says: “I’ve grown up with incarceration all around me. When my son Yancy was born, I was 16 years old. I want more than anything for my 4-year-old to grow up without me having to drive to prison to see and hug our family. I don’t want him to think this is normal, even though it is happening all around us.”

This trailblazing article sheds light on the scope of mass incarceration’s effect on families and loved ones – particularly women – and alerts us to the fact that this group has been under-studied and often ignored. It helps lay the groundwork for a better understanding of the consequences of mass imprisonment in the United States and its particularly devastating impact on women with incarcerated loved ones.

Essie Justice Group is an organization that works directly with women with incarcerated loved ones. To comment on the report or to be put in touch with the authors of the article, email gina@essiejusticegroup.org or write to Essie Justice Group, 300 Frank Ogawa Plaza, Suite 420, Oakland CA 94612.

An interview with Damien Posey of US 4 US Bay Area