Richmond – Judge Thomas Maddock, Juvenile Delinquency Court, Superior Court of California, Contra Costa County, labeled 14-year-old Lauryn G. “a danger to society” as he convicted her and took her immediately into custody without even the opportunity to hug her mother goodbye. The conduct in question was based on an incident which occurred on Jan. 18, 2014, at Fallas Paredes Discount Family Clothing Store in San Pablo, California.

Lauryn was in the store with a number of adult and juvenile female relatives who were shopping when they noticed they were being closely followed by all seven employees in the store. Later in court, when Lauryn’s public defender asked the store manager why he and his employees had been following the group, he testified that they were “customer servicing” the group under the suspicion that one member may have concealed something in the past.

Feeling racially profiled, the group got into a verbal altercation with the store manager, who greatly offended the group when he said something to the effect of “That’s why I don’t like Black people in my store,” among other racially-charged comments. Tensions increased to the point of Lauryn feeling threatened, and eventually she made the immature decision to use pepper spray handed to her by an adult.

Judge Maddock did not entertain Lauryn’s lawyer’s self-defense explanation, but instead reached his verdict relying solely on the prosecution’s version of events. Despite her age and this being her first offense, Lauryn was initially taken to Juvenile Hall and remained in custody from Jan. 24 to Feb. 4 before being released when it was brought to Judge Theresa Canepa’s attention that Lauryn had support and services in place in the community that would serve her better than Juvenile Hall.

Judge Thomas Maddock, Juvenile Delinquency Court, Superior Court of California, Contra Costa County, labeled 14-year-old Lauryn G. “a danger to society” as he convicted her and took her immediately into custody without even the opportunity to hug her mother goodbye.

Upon her release, she stated that the experience was so bad that she never wanted to go back there again. She returned to school and immediately began improving her attendance and bringing her grades up from Ds and Fs to As and Bs.

She was recently given an award for most improved student in her middle school. Lauryn returned to the therapeutic groups and services that were already in place and even enrolled in additional counseling classes.

Her improvement was such that her teachers, advocates and mental health providers were so impressed that they provided several glowing letters of recommendation on her behalf and offered them to the court in anticipation of her pending hearing.

Judge Maddock, in his decision to take Lauryn back into custody after three months of perfect behavior and incredible improvement, did not consider the letters of recommendation but instead ruled from his own biased judgment and the case put on by the prosecution. Indeed, Judge Maddock used derogatory terms when referring to Lauryn’s female relatives, referring to their weights, stating that the store manager was justified in feeling threatened by them because of their size.

Lauryn is certainly not a “danger to society”; rather, the juvenile justice system is the danger to our society.

In addition, he made a number of bizarre and irrelevant comments about the race of the store manager, insinuating that a person of color was incapable of racial profiling.

In juvenile cases, where there are no juries, judges are the sole arbiters of justice and have broad discretion to order sentences. Judge Thomas Maddock, a Republican appointed by then-Gov. Pete Wilson in 1998, may not be in touch with the latest research on adolescent development and trauma-informed care to determine what will best rehabilitate youth, particularly youth of color, in this county.

Currently, Lauryn has been languishing in Juvenile Hall for 14 days since her conviction, adding up to nearly a month of her 14-year-old life behind bars. While in Juvenile Hall, Lauryn has received no therapeutic services or counseling, nor has she been able to accumulate middle school credits, despite attending class every day.

Even with Lauryn’s incredible depth of resilience, the inhumane conditions of the Contra Costa County Juvenile Hall, which is currently being sued for overuse of solitary confinement and other deplorable conditions, has had a traumatizing impact on Lauryn’s sense of self and well-being.

Lauryn is set to receive her final sentence on May 19, where she will be led publically up the steps in shackles. Her supporters will be present in the courtroom and on the courthouse steps to support her and to protest the harsh treatment of juveniles in the justice system, as well as Judge Maddock’s intentional and dangerous dismissal of the role race played in this case and trial.

The disparity in treatment of youth of color is systemic and widespread, as evidenced by the highly racialized youth-to-prison pipeline and demands change.

Lauryn is set to receive her final sentence on May 19, where she will be led publically up the steps in shackles.

It is critical that the public, including parents, caregivers, voters and service providers are aware of how business is conducted in the Contra Costa County juvenile justice system. It is equally critical that elected officials pay attention and ensure that judges are held accountable to higher standards of justice. Lauryn is certainly not a “danger to society”; rather, the juvenile justice system is the danger to our society.

Richmond City Council member Jovanka Beckles works as a mental health specialist for Contra Costa County. She was born in Panama City, where she grew up in a bilingual, multicultural household. Her parents moved to the United States in1972, and she has lived in Richmond for the last 15 years. She can be reached at Jovankabeckles@gmail.com. 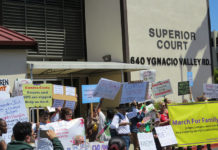 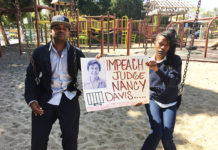