Our Formerly Incarcerated Quest for Democracy (Q4D) Day continues to grow and evolve. This year we had over 250 committed people, many of whom were returning from previous years’ Q4D. We had around 30 teams of people advocating on legislation relevant to formerly incarcerated people and our communities.

Grassroots co-sponsors got a chance to educate community members about their bills. And Sen. Holly Mitchell as well as Assemblymembers Reginald Jones-Sawyer and Autumn Burke addressed participants. See the box below showing all the bills we were there to endorse.

It’s important to recognize the larger context of our quest: It is the drive for greater recognition of a class of people for whom democracy looks a lot different. We don’t have a guaranteed right to vote – if we move to another state we could easily lose it. We’re still struggling for the fundamental rights of citizenship, such as the right to sit on juries.

Please enjoy some of the powerful voices and beautiful faces of people who came out this year.

Kevin of Oakland: “I’m a formerly incarcerated person myself. I support a lot of the bills we’re talking about today, but especially the housing bill, AB 1056. I’ve been out for 15 months and could afford my own place but I’ve been turned down over and over again because of my record. If you come out and don’t have a safe place to live, what are your options?

I’ve applied to be a security guard, and I have a team of seven people backing me up. They all gave recommendations as to my good character, and I was still turned down. The reason they cited was ‘insufficient rehabilitation.’ What does it take?”

Tariq Muhammad of Stockton: “It’s very ironic that we’re here on a quest for democracy in the land of so-called democracy. I’m a youth organizer with Fathers and Families of San Joaquin, and I’m here to support the voices of those who can’t be heard.”

Ruben of Oakland: “I’m here because I have friends and family still locked up. I want to be a voice for them.”

Leon of Riverside: “I’m formerly incarcerated and feel it’s important to participate. I would like to be a facilitator at some point, so I’m here today to see how that works. I support SB 504. Even as an adult those ‘juvenile’ records can be held against you. It’s a double-edged sword – you get out and try to change, but they hold it against you and you can’t get a job.”

Vonya Quarles of All Of Us Or None, Riverside Chapter, and Starting Over, Inc.: “Who are we? We are PEOPLE. We want to go in and blow all their stereotypes about who we are.”

Jagada Chambers of Stockton: “I’m an AB 109 resource specialist for Fathers and Families of San Joaquin. As a formerly incarcerated person myself, I have a direct empathy for people coming out. Any way we can assist, I’m on the bus. I think AB 1351, allowing pre-plea diversions so crimes are never entered onto a person’s record, is an important bill. With that we can avoid Prop 47 altogether.”

Victoria M.: “I’m here because I have a commitment to formerly incarcerated people being treated like human beings. I’ve always felt that way, but a couple of things really solidified that for me. One is my nephew being incarcerated, and the other is witnessing the extreme trauma of my friend’s family over her son’s incarceration. My friend’s young daughter is still traumatized by the years of prison visits to her brother.”

Jada Layne of Project WHAT, a high school student: “I’m here because I like the fact that we’re working to change laws that could affect our family members. I’m most interested in the bills for sealing ‘juvenile’ records and getting our elders out on parole.”

Darris Young of Oakland: “I’m an organizer and I’m here to be around beautiful people and to let legislators know that people like myself, formerly incarcerated people, have a stake and a say in the direction of how things are going. I want to advance policies that advance the lives of formerly incarcerated people and also those who aren’t incarcerated but are impacted by it, the larger community that is dealing with poor schools, lack of infrastructure etc. Too often they want to focus on individuals and not really look at the impact on communities.”

Gloria Willis of All Of Us Or None, Riverside Chapter: “I marched with Martin Luther King and, since then, I have to say, I have not seen enough of a change. I was active in the Tyisha Miller case down in Riverside. The police shot and killed her. After two years of constant protesting, the police finally got fired, but no charges were pressed, and one of them was rehired right away in another county. I’m also interested in prison reform, because I have three incarcerated family members – one in juvenile and two others who are in prison and are mentally ill. We have to get better treatment for incarcerated people, because prisons are an extension of our community.”

Nicholas Routledge of Oakland: “I run a house similar to a Catholic Worker’s house for formerly incarcerated men in Fruitvale. I’m another white person trying to be in solidarity as best I can. I do believe that mass incarceration is the defining obscenity of our time, just as slavery was in another era.”

Anthony Forrest of Oakland: “I work at Planting Justice in Oakland and also have my own business. Planting Justice is a permaculture skills training program currently in San Quentin and Solano prisons, and we want to get our program into Mule Creek and Folsom prisons. I’m here to speak in support of the bills providing housing funds for formerly incarcerated people and preventing discrimination based on conviction history. This is important to expanding our program – we teach people permaculture so they can have a job when they get out, but how can they have a job if they don’t have housing?”

Devon Williams of Los Angeles: “My first arrest was for theft, and I got ‘juvenile’ probation for a year. But what I didn’t get were any resources – for employment or education or housing. I wound up back in detention and had an epileptic seizure. The guards accused me of lying and put me into solitary confinement. I remember it being so cold, and it felt like I was going crazy.”

Sharina Chavis of San Bernardino: “I’m formerly incarcerated myself. I was doing a six year term and then my daughter came to the same prison. While I was inside, my mom also passed. When I got out, my biggest worry was where to live, and I was fortunate to get accepted into A Time for Change in San Bernardino. After being in prison, so many people have low self-esteem and really need help. I’m a big advocate for Ban the Box. It’s really powerful to be here today!”

Ernest of Los Angeles: “I’m a formerly incarcerated person. I work at Amity Foundation, and I’m here for the solitary confinement bill. I spent time in and out of solitary when I was inside, and I know what it does to you both mentally and physically.”

Dorsey Nunn, award winning director of Legal Services for Prisoners with Children, with over 35 years’ experience working on prison related issues, is also co-founder of All of Us or None, a project of LSPC started by formerly incarcerated people in 2003. He was sentenced to life in the California Department of Corrections when he was 19 years old. He paroled in 1981 and was discharged from parole in 1984. He can be reached at dorsey@prisonerswithchildren.org. 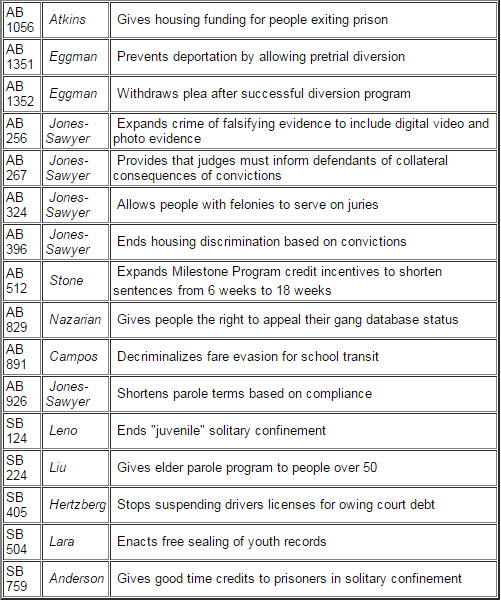