Support for the now-suspended New Jersey teacher who allowed her third-graders to write get-well letters to former Black Panther Mumia Abu-Jamal was undeniable at the fateful Orange Public School Board meeting April 14. Supporters flanking both sides of Marylin Zuniga called for her reinstatement while she appealed to the board to allow her to continue teaching after the highly-criticized writing activity.

But among the cheers and the declarations that the third grade English Language Arts and Social Studies teacher at Forest Street School was a hero, Zuniga told NewsOne that her young students are the real heroes for showing “compassion.”

“I in no way identify myself as a hero,” Zuniga told NewsOne. “My kids should be looked at as heroes because they showed compassion, care and love like any member of the community should show. They were mature enough to do that in a letter – and it is incredible and admirable of them as well.”

Zuniga came under fire after allowing the students to write letters to Abu-Jamal, who fell ill in prison in recent weeks due to complications from diabetes. Abu-Jamal, who is serving a life sentence for killing a Philadelphia police officer in 1981, has long been a symbol of Black liberation for his commentary on injustice and systemic racism.

Support for the now-suspended New Jersey teacher who allowed her third-graders to write get-well letters to former Black Panther Mumia Abu-Jamal was undeniable at the fateful Orange Public School Board meeting April 14.

Zuniga told NewsOne that she taught the students about Abu-Jamal during a Black History Month lesson on Black civil rights leaders. 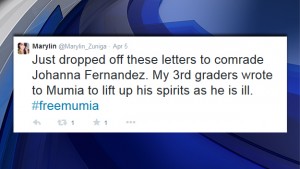 “On Feb. 5, I presented a do-now that stated: ‘What is the main idea of this quote: So long as one just person is silenced, there is no justice,’” she said in a statement released shortly after her suspension. “This quote is by Mumia Abu-Jamal.

“Many of my students took it upon themselves to go home and do research about civil rights leaders discussed in class. In April, I mentioned to my students that Mumia was very ill, and they told me they would like to write get-well letters to Mumia.”

When asked if she had hesitation about her students writing the letters to the prisoner, Zuniga told NewsOne that society should start to rethink what leadership means.

“I’m sure some people would say figures like that should be taught at a high school level, middle school level,” she said. “I think that it’s actually incredible that a third grader would be able to show critical thinking skills at such a high level when they’re only in third grade.

“In a lot of ways, it can be said that Nelson Mandela was ostracized at first – and look at his record now. Look how many people admired him and wrote him letters. That was over 30 years ago – and those teachers were scrutinized for it. So I think we need to reconstruct our thoughts on who a leader is.”

The get-well letters were given to Baruch College Professor Johanna Fernandez and handed to Abu-Jamal during a visit. Orange School Superintendent Ronald Lee said administrators were “surprised to learn of the assignment, because Zuniga did not seek approval from the school or parents.”

Zuniga, however, told NewsOne she allowed the writing exercise because the students had completed their required coursework.

The decision that night, despite the standing-room-only crowd’s support, was to suspend her. And on Tuesday, May 12, the board decided during an even more heated board meeting to fire Zuniga.

But the young teacher, who explains that she learned the pain of a lack of compassion when growing up in a white community that scorned and shunned her for being an immigrant, says the support around her has “rested her spirit” and affected her in a “positive way.”

“Parents are supporting me, students are missing me and, more than anything, I want to see my students again,” she said. Democracy Now quoted 8-year-old Cashmere Jones: “She has been a great teacher to me and all the other classmates, and we all really want to see her again.”

The get-well letters were given to Baruch College Professor Johanna Fernandez and handed to Abu-Jamal during a visit.

The president of the Philadelphia Fraternal Order of Police denounced Zuniga’s actions, saying the writing assignment was “not a good use of school time.” “It’s absolutely not teaching them anything except how to interact with a convicted cop killer,” John McNesby told the NY Daily News.

Christina Coleman, managing editor of NewsOne, where this story first appeared, and a contributing editor for Global Grind, can be reached on Twitter at @ChrissyCole. Bay View staff contributed to this story.