I visited Mumia this past Saturday, June 13.

Mumia was in good spirits. We talked about the happenings of the world, and he shared a lot about his stay at Geisinger Medical Center.

Here is what I saw and heard. Mumia came to the visiting room in a wheelchair and I wheeled him around. Although he tried to wheel himself around, he couldn’t do so with ease.

Mumia’s skin, while better, looks really bad. His skin remains really, really dark and leathery – from head to toe. At least two of his fingertips have visibly cracked lesions that look painful.

His face seemed a bit swollen and darker than I’ve ever seen it. It was so dark that I asked him if he had been in the sun. He said, “No,” that he has not been out to yard since January when he started to get sick.

Mumia still has bandages on his legs because he still has open wounds, and his feet and toes were very swollen. I asked him about it, and he said the doctors in the prison infirmary said that when the body is healing itself it releases fluid. I’m no doctor, but I gave him the side eye when I heard this.

Mumia explained that when he was at Geisinger, the nurses covered him up from head to toe with a steroidal cream, which they alternated with vaseline and then covered him from head to toe in wet wraps. They did this like clockwork every four hours. The specialists and nurses at the hospital said that they had never seen a case like his, and as we know he left this second hospitalization without a diagnosis.

It is clear that the hospital contained the spread of skin lesions that were out of control, and in so doing contained the worst symptoms of a serious skin disease. But the skin disease itself remains active all over his body and undiagnosed.

It is especially worrisome that he still has open lesions on his legs. And isn’t the body supposed to breathe through the pores of the skin? Anyone who looks at his skin can see that there is no breathing happening through the leather patch that now covers all of his body.

He also mentioned that one major problem of concern is that his hemoglobin levels have been going down steadily for some time, and they can’t figure out why.

I couldn’t help but think that we need to pick up the pace on his diagnosis, which means demanding that he be freed immediately; Mumia should never have been imprisoned in the first place.

Mumia needs to be taken to the best hospital for skin disease and blood disorders in the U.S. At the very least, he needs to see different specialist doctors who have experience diagnosing and treating both these problems.

On a positive note, he reports that his diabetes is under control without medication. He is reading a book on diabetes and is watching his diet to the extent that he can.

He does not have a special diet in the prison. No prisoner does. On the day of my visit, watching his diet meant that he ate half of the big white bun of the fish sandwich I bought him and drank water rather than juice.

About his experience at Geisinger, he said with a chuckle that when they began to wrap him up in the wet wraps, the nurses and doctors said jokingly that he looked like a mummy and poked fun at the similarities between what he looked like and his name, Mumia. He shared, over and over again, that they treated him with respect and like a human being.

My sense from listening to him was that because he was almost killed in the prison infirmary – by doctors whom he believed were doing right by him but weren’t – he has been living through one of the most vulnerable and physically painful periods of his life. Following this second hospitalization, which was due to open lesions in his legs, it meant the world to him that the staff at Geisinger treated him like a human being.

Mumia also reported that at some point a nurse in the hospital asked him what he wanted to eat. And he said, “Wait a minute, stop the press. I can actually order what I want to eat?” And when she said, “Yes,” he went to town and even ordered ice cream at some point. He said that she would check the computer and if his diet allowed it she would give him whatever he ordered, and if it wasn’t allowed she would offer him an alternative.

Listening to Mumia tell the story of his food exploits at the hospital and his sense that he was treated like a human being brought joy and pain to my heart. So many thoughts rushed through my head, including that there is so much that we take for granted here on the outside. And of the damned prisons – in their attempts at stripping people of their dignity and health, they are simply barbaric.

As you know, despite the respect he was afforded by doctors, Mumia had a leg and an arm shackled to the bed throughout his stay at Geisinger.

Mumia has been through war, he survived an attempt at his life, he is still very sick and we need to bring him home. 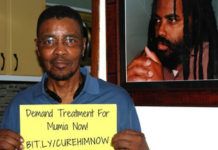