Public Enemy blatantly pushed this message before I was old enough to have a consciousness when they released “Fear of a Black Planet” in 1990. This seems to be the fear of the world and the motivation behind the ethnic cleansing that is taking place in the Dominican Republic.

As a Dominican-American who identifies as an Afro-Latina and who celebrates the African Diaspora every day, I am disgusted by the sanctions of the Dominican government. A quarter of a million migrant Haitian workers could be deported tomorrow.

Over 2,000 military soldiers have been ordered to patrol the border tomorrow as of 6:00 a.m. A 45-day grace period has been discussed to allow for those ordered to leave to collect their bearings. But make no mistake, they are being ordered to leave.

The womb of Hispaniola is in pain and, by tomorrow, could be a war zone. The hate against Haitians in the Dominican Republic has become increasingly alarming. As we have gotten closer to the deportation deadline, hate crimes have been very visible, with Haitians being lynched in broad daylight.

Let’s be clear – this racial issue in DR is not a thing that just started a few years ago. It didn’t start when the Dominican government announced its Supreme Court ruling, which states that children born in the country to non-citizens after 1929 do not quality for citizenship, regardless of whether they themselves were born in the Dominican Republic. 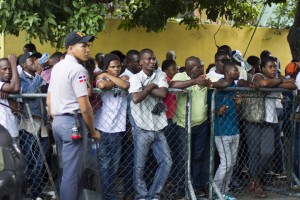 This only became news to families of Haitian descent in May 2013, when the Naturalization Law 169-14 was adopted. Yet, the haunting sting of racism has plagued my people for decades.

Let me walk you through a little history of Haiti-Dominican relations:

From 1930 until his assassination in 1961, DR had an extremely xenophobic dictator named Rafael Leonidas Trujillo. Under his regime, DR bore witness to the murder of over 20,000 Haitians. The most catastrophic event was the Parsley Massacre of 1937, in which any person who was dark-skinned or “looked” Haitian, who could not pronounce “perejil” (Spanish for parsley) was killed.

In 1939, he opened the gates for Jewish refugees, Republican exiles from the Spanish Civil war, and the Japanese as part of a plan known as “Blanquismo,” or the lightening of the race. He even went as far as having the dance to Merengue modeled after European waltz. The dance genre changed a lot since then.

He worked tirelessly for DR to appear more European from a surface level at the cost of thousands of lives. He also stocked our universities and hospitals with light-skinned professionals from abroad. How devastatingly hypocritical that he wanted to get rid of the Blacks and bring in Whites, when he himself was born to a Haitian mother. Reminds you of Hitler, doesn’t it? 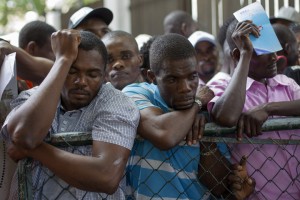 During this time, anyone who opposed or criticized the Trujillo regime was killed, raped, kidnapped and slaughtered. This was infamously documented in “The Time of the Butterflies,” which told the story of the demise of the Mirabal sisters.

After Trujillo’s death, Joaquin Balaguer, his right hand man, governed DR for three non-consecutive terms, the last of which spanned 10 years, ending in 1996. For decades, Dominican people have lived in fear of their military and many still do. A shadow of the same xenophobic mentality that ruled the country during Trujillo’s 30-year dictatorship still lingers today.

This idea of purifying and lightening the Dominican race has not changed a bit. Just ask Sammy Sosa, who in 2011 bleached his beautiful chocolate skin to appear lighter. This internal self-hate inflicted upon us by our Dominican families goes back generations, specifically the generations that lived during Trujillo’s regime. Line after line of Dominican families have hated their skin because it was not light enough or because they didn’t have long, silky hair like their Eurocentric-Dominican brothers and sisters.

Despite the Dominican extension of the African Diaspora through its music, color, language and food, DR does not take pride of its African ancestry. Every year on Feb. 27, we celebrate independence from Haiti (1844), yet we never celebrate or even acknowledge the independence from Spain, our colonizers.

My mother migrated from the Dominican Republic to New York City when she was seven months pregnant to give birth to me on U.S. soil. This was an intentional act because she knew the benefits that her child would receive once born in the states.

The mentality of Haitians in DR is no different. This is not a crime, but instead is the history of the world. We’ve left our lands for foreign territories to give our children and ourselves better opportunities – this has always been the plight of the immigrant.

I was just in the Dominican Republic last month. This trip, I spent it with local kids and families in need in El Soco, one of the many bateys (sugar cane field worker towns) that has a large concentration of Haitian-Dominicans. These same kids may not have a home tomorrow.

My heart cries at the thought of the souls that can possibly die tomorrow. I say this with gravity: The Dominican militia is not one to fuck with, especially if you’re dark and look Haitian.

It’s 2015 and the trail of racial events that has taken place throughout the last couple of years proves that the world still has MANY unresolved issues when it comes to color. Not all Dominicans are racist; I promise you that.

When I stand up for people of color or dark-skinned Latinos, I’m often judged because “I’m not Black.” Every time it happens, the pain gets deeper, because that critique sums up our issue with color. My shade of brown is just as valid, my story just as real, and the Haitian blood that runs through my veins is an undeniable part of me.

The world needs a shift in consciousness; world governments need to be urged to shift how they treat Black people.

Blood will be shed tomorrow and I pray that this event will wake us up to see us ALL as people of color and to support one another, instead of continuing to divide ourselves by skin color complexes.

Click here to sign a petition to pressure the government of the Dominican Republic to stop its planned “cleansing” of 250,000 Black Dominicans.