A young white man, barely at the age of his majority, walks into Charleston’s most storied Black church and, before he leaves, a new history is written.

Attending the Wednesday night Bible study, he sits for nearly an hour, but his mind isn’t on the life of Jesus nor his disciples. It’s on murder, mass murder. When the door shuts behind him, nine Black souls, elders mostly, had been slain, Bibles in hand.

The man – or boy more than man really – hadn’t come to learn about religion, for he had a belief, white supremacy, or the profound hatred of Black people.

White supremacy is the mother’s milk of Charleston, of South Carolina, of the South, of America. For surely as slavery funded and built America, the underlying principle was the devaluation, exploitation and oppression of Black life. It’s the only thing that makes the church massacre in Charleston even remotely intelligible.

Nine Black people were sacrificed to the blind idol of white supremacy for the same reason that thousands of Black men and women were lynched on American elms and pines: as sacrifices to an idea, to perpetuate a system of economic injustice.

Dylan Roof, the 21-year-old accused of this massacre, had no friends to speak of, no place to stay other than an associate’s couch, no job, and a tenuous relationship with his parents. Isolated, alienated, alone in the world, his sole remaining possession was his whiteness, the only thing that gave his existence meaning. That was the energy that fueled the massacre in Charleston, South Carolina.

Nine Black people were sacrificed to the blind idol of white supremacy for the same reason that thousands of Black men and women were lynched on American elms and pines: as sacrifices to an idea, to perpetuate a system of economic injustice.

It now sits like an incubus in the American soul, seething hatred and fear, waiting for more Black lives to consume.

© Copyright 2015 Mumia Abu-Jamal. Keep updated at www.freemumia.com. His new book is “Writing on the Wall,” edited by Joanna Hernandez, to be released April 21. For Mumia’s commentaries, visit www.prisonradio.org. Encourage the media to publish and broadcast Mumia’s commentaries and interviews. Send our brotha some love and light: Mumia Abu-Jamal, AM 8335, SCI-Mahanoy, 301 Morea Road, Frackville, PA 17932.

Sick as he still is, Mumia summons the strength still to write and record commentaries. We love you, Mumia! 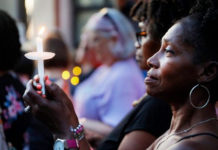