On July 13, President Barack Obama followed up his March 2015 pardons of 22 federal prisoners by commuting the sentences of 46 federal prisoners who had served time for what has been described by the Washington Post as overly harsh sentencing.

Tuesday, July 14, Obama will speak to the NAACP at its national conference about sentencing disparities. And on Thursday, July 16, Obama will meet with law enforcement officials and prisoners when he visits El Reno, a medium security prison that’s home to 1,300 inmates. The trip, which will be recorded as part of an HBO documentary, is also the first time a sitting president has visited a federal prison.

Front line advocates for prison reform all over the country should view this move by the president as an encouraging sign of hope in achieving 21st century prison reform. And if we do not do our part in helping the president push for sentencing, justice and prison reform, we too risk more than a long sentence.

Many prison reformers criticized President Obama for not doing enough in his first six years in office on presidential pardons. Now, many of these same advocates are encouraged by what they see – a president with a plan on justice reform, which could also expand into the first real opportunity for meaningful prison reform.

Since 1776, the president of the United States has had sole power to grant a pardon to anyone accused or convicted of a federal crime. George Washington pardoned men convicted in the “Whiskey rebellion.” Abraham Lincoln pardoned, commuted or rescinded the convictions of over 200 Dakota Indians who attacked White settlers in the Great Sioux Uprising.

Front line advocates for prison reform all over the country should view this move by the president as an encouraging sign of hope in achieving 21st century prison reform.

However, this executive power has been abused by many presidents. President Richard Nixon commuted the sentence of Jimmy Hoffa, who was convicted of fraud and bribery. President Ford granted a full and unconditional pardon to President Richard Nixon just before he was about to be indicted for his alleged crimes as president. President Ronald Reagan pardoned former New York Yankees owner George Steinbrenner, who was convicted for illegal campaign contributions and obstruction of justice.

Many view President Bill Clinton’s pardons as the best reason to overhaul the presidential pardon powers. He granted his own brother, Roger Clinton, a pardon after his conviction for cocaine possession. He fully pardoned Patty Hearst for her role in a bank robbery. And also, at the request of three Republicans including Lewis “Scooter” Libby, pardoned billionaire Marc Rich along with his business partner, indicted on tax evasion and illegal trading with Iran.

President George W. Bush commuted the sentence of the same Lewis Libby, who was convicted of perjury in connection with a CIA leak scandal.

If we do not do our part in helping the president push for sentencing, justice and prison reform, we too risk more than a long sentence.

Even in states where governors enjoy the executive privilege of the power to pardon, there have been signs of stress on the process. In 2012 former Mississippi Gov. Haley Barbour granted pardons to nearly 200 persons at one time, including four who worked at the governor’s mansion. Harry Bostick, a former IRS agent with political ties, was also among those pardoned by Gov. Barbour. A week after Bostick – with three prior DUIs on his record – was granted his pardon, he was sitting in a jail cell charged with DUI; an 18-year-old girl was killed.

Former California Gov. Arnold Schwarzenegger used his executive privilege to reduce the sentence of Esteban Nunez. His admission to the 2008 stabbing death of another young man was met with a 16-years-to-life sentence. However, as a favor to a political ally Schwarzenegger called a friend, he reduced the sentence for Nunez by half. He is scheduled to be released in 2016.

The clear and convincing evidence that this abuse of power by some of our presidents and governors suggests that it is time to reform not only sentencing on the federal level, which Obama is committed to, but the clemency power itself, which has remained basically the same for 239 years on the federal level.

ThinkProgress.org reported the White House promise for a clemency push over the past year includes soliciting applications from nonviolent federal offenders who have been in prison for at least 10 years on sentences they likely would not have received if convicted today. So far they have received 35,000 federal inmate applications.

USA Today reported Obama saying he is taking a “new approach” to pardons. “Historically, what the president would get is a big stack of recommendations, and then I would sign off on them, because obviously I don’t have time to go through each request,” Obama said. “So what we’ve done now is open it up so people are more aware of the process.” It is no wonder that Obama has rejected over 7,300 of these requests, while granting 89 since he came into office.

The clear and convincing evidence that this abuse of power by some of our presidents and governors suggests that it is time to reform not only sentencing on the federal level, which Obama is committed to, but the clemency power itself.

The tragic July 1, 2015, killing of a San Francisco woman walking on a pier and the charging of undocumented immigrant Juan Francisco Lopez Sanchez with discharging the gun that caused her death produced no shortage of government agencies to fault.

Lopez-Sanchez, who many say should not have been released from a San Francisco jail, where he was being held on a 20-year-old marijuana warrant, has many turning their attention to more sensible immigration policies to prevent a recurrence. However, the stress that is on our entire justice system should be the focus if we are to really get the upper hand on prison reform.

In line with the president’s vision, we should not only “open it up” for more to be aware of clemency but also to participate in it. A new clemency system, where pre-screened common sense thinking individuals with nothing to gain personally would do a better job at judging who is best deserving or suited for a pardon or commutation.

Leaving the most powerful tool in criminal justice in the hands of politicians who have no doubt taken too many liberties with clemency must come to an end.

This idea was first offered to the California Attorney General’s office for “Title and Summary” in the year 2001 and still appears on the Legislative Analyst Office website. It was called, California Clemency Boards and should be viewed as real power to the people.

Leaving the most powerful tool in criminal justice in the hands of politicians who have no doubt taken too many liberties with clemency must come to an end.

As author of this new clemency process, I can assure anyone concerned about its purpose to release prisoners that in no way would I create nor should citizens be expected to support something that could be a get-out-of-jail-free card for those bent on committing crimes.

The goals are attainable: Streamline the process for those proven by DNA technology to have been wrongly imprisoned. Save billions of taxpayer dollars going towards our prison industrial complex. Permanently eliminate prison overcrowding safely by having a smaller prison system, improving safety for current prisoners and prison staff. Create a safer community by eliminating the current process where in too many jurisdictions one individual judges thousands of requests for clemency.

A 2015 version of California Clemency Boards is on its way to the California Attorney General’s Office for title and summary and consideration for signature gathering for the November 2016 election. Among other components, California Clemency Boards call for at least one mini clemency board in every one of California’s 58 counties. Qualified citizens and not politicians would rule on who should be released from prison to return back into their communities.

To be content with chanting “Power to the people” at prison reform rallies and rely on yet another politician’s promise that once elected he or she will give power back to the people, we are kidding ourselves. No chant without action will produce power. And no politician will concede power on his or her own.

Therefore, if we are willing to accept the fact that a president has pardoned his own brother or a president and a governor have granted clemency favors for friends and we are not willing to do the same for many of the nonviolent brothers and sisters disproportionately represented among the 200,000 people in our federal prison system or the total U.S. prison population of 2 million, we have committed a serious crime.

It should be considered a felony, undeserving of a presidential pardon. 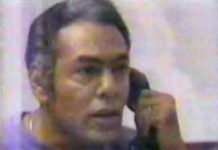 Proposition 47: The clock is ticking to apply for relief