When Bree Newsome pulled down the Confederate flag – the banner of fascist Ku Klux Klan terror, akin to the Nazi swastika – from in front of the South Carolina statehouse in Columbia on June 27, she gave brief, heroic expression to an anger felt far beyond the Lowcountry over the bloody massacre in Charleston 10 days earlier.

The young Black activist’s exemplary act of protest recalled a series of events three decades ago, not in a bastion of the Old South ruled by Republican nut jobs, but 2,500 miles away in liberal San Francisco. San Francisco Chronicle journalist Peter Hartlaub recounted in a June 21 posting on his SFGate.com blog that the Confederate battle flag used to fly in the S.F. Civic Center Plaza.

Hartlaub wrote that he’s not sure when the flag “came down for good.” The answer is 1984, when supporters of the Spartacist League, Spartacus Youth League and Labor Black League for Social Defense removed it in the face of strenuous efforts to keep it flying by the city’s then mayor Dianne Feinstein, now a longtime leader of the Democratic Party in the Senate known for pushing U.S. imperialist wars and NSA snooping.

On April 15, 1984, SL and LBL supporter Richard Bradley, clad in the Civil War uniform of a Union Army soldier, scaled a 50-foot flagpole at the S.F. Civic Center and ripped down the Confederate flag of slavery that had flown over the city for too many years. At ground level, what was left of the flag was burned by a member of International Longshore and Warehouse Union Local 6.

As the hated symbol of racism and Klan terror was set ablaze, a crowd of Black people, trade unionists and socialists broke into jubilant cheers, and a chorus of “John Brown’s Body” rang out. Black people in the Bay Area welcomed the victory as their own; press clippings make clear that people across the city were glad to be rid of the insult.

At the time, Feinstein, who was in the running for the Democratic vice presidential nomination, was seeking to curry favor with the Dixiecrats, who would be arriving in town three months later for the Democratic National Convention. She had the flag put back up – a racist provocation that came one day after the outrageous acquittal of a KKK-Nazi death squad who had gunned down five leftists, civil rights activists and union organizers in Greensboro, North Carolina, in 1979. Bradley and the SL responded by going right back and tearing the new flag to pieces, just hours after Feinstein had hoisted it.

Bradley, who knew well from his childhood in South Carolina what that flag stood for, was arrested for the second time and would be put on trial for “vandalism.” In the eyes of Feinstein and the racist cops, he was a criminal for tearing down the slavocracy’s rag, but in the Bay Area, Ritchie was a local hero, unable to walk into a bar or restaurant without having a drink or meal bought for him.

Telegrams and phone calls poured into the mayor’s office, including from local union leaders, forcing Feinstein to back down and promise that the hated flag would not fly again.

Bradley climbed the flagpole a third time, this time to put up a replica of the historic Union garrison flag that flew over Fort Sumter in Charleston Harbor when Confederate forces fired the opening shots of the Civil War. Demonstrating again her scorn for those who fought to smash slavery, Feinstein vindictively had the Union flag removed and it was shredded.

The actions of Bradley and the SL garnered support and gratitude far and wide, including from the incomparable writer Gore Vidal, who inscribed a copy of his new novel “Lincoln” with the words “Lincoln would also have wanted the flag’s symbolic removal.” On June 4, Bradley’s trial ended with a hung jury – eight for acquittal.

One juror told Bradley, as he shook his hand, “I would have done it if I had the guts.” The juror donated $20 to the defense and bought a subscription to Workers Vanguard. A week later, in an attempt to avoid further embarrassment for the city administration, Feinstein’s district attorney moved to dismiss all charges – over the strenuous objections of the defense with Bradley insisting on his day in court.

But the story didn’t end there. Feinstein just would not let it die. At the end of June, on the same flagpole that Bradley had twice scaled to remove the Confederate battle flag, the mayor raised the “Stars and Bars,” the first flag of the Confederacy.

That flag was a call to arms for the slaveholders in 1861, just as the Confederate flag is today for the paramilitary KKK and Nazi killers. It was moreover an affront to the history of California, which entered the Union as a free state in 1850 and supplied troops for the Union Army.

In the early morning hours of June 29, anti-racist militants not only took down the flag of slavery but also felled the pole. One of these union workers later wrote to Workers Vanguard, describing the carefully planned action. His report began: “Using an acetylene cutting torch we first cut out a wedge, or fish mouth, to determine the direction of the fall,” and it went on to detail the safety precautions taken to ensure no one was injured.

The Spartacist League saw to it that the Confederate flag, the banner of racist terror, didn’t fly at the S.F. Civic Center. We have a long and proud history of fighting for Black freedom based on the understanding that it will be fully achieved through a third, socialist American revolution. Join us in this task. Finish the Civil War!

Workers Vanguard, where this story first appeared, can be reached at slbayarea@fastmail.net or 510-839-0851. 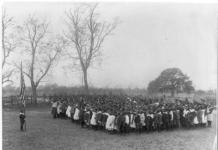