Graduating from Antioch University’s PhD program in Leadership and Change on Aug. 1, 2015, Cynthia McKinney fulfilled a lifelong dream to complete her education with a terminal degree. Cynthia is pictured here in Yellow Springs, Ohio, the school’s main campus, with the other graduating members of the PhD program.

In keeping with her interests in U.S. policy, Dr. McKinney wrote her dissertation on the leadership challenges faced by President Hugo Chavez as he asserted the Bolivarian Republic of Venezuela’s right to sovereignty. President Chavez’s mission as leader of Bolivarian Venezuela caused him to tackle the tough issues of U.S. domination, notions of white supremacy, and the long-suppressed human rights of Venezuela’s Indigenous, African and mixed populations that, together, constitute the majority of the people in the country. The title of Dr. McKinney’s dissertation is “‘El No Murio, El Se Multiplico!’ Hugo Chavez: The Leadership and the Legacy on Race.”

University of California at Berkeley Professor Emeritus Dr. Peter Dale Scott served on Dr. McKinney’s dissertation committee, and his influence can be seen as she sets the context of Hugo Chavez’s leadership by exploring the intricacies of deep politics in U.S. foreign policy in the past – COINTELPRO (the counter intelligence program of the U.S. government, spearheaded by the Federal Bureau of Investigation), Operation Condor – and in the present.

Graduating from Antioch University’s PhD program in Leadership and Change on Aug. 1, 2015, Cynthia McKinney fulfilled a lifelong dream to complete her education with a terminal degree.

After the U.S. Justice Department prosecuted and imprisoned journalist Barrett Brown for publishing WikiLeaks documents, McKinney was unsuccessful in her effort to use extremely revealing U.S. diplomatic cables and other key information in her dissertation that had also been published by WikiLeaks; this information was important because it exposed contemporaneous U.S. attitudes and behavior toward Hugo Chavez, in particular, and the Bolivarian Republic of Venezuela, in general.

Also serving on Cynthia’s dissertation committee were Dr. Philomena Essed, noted scholar on Critical Race Theory and Dr. Joseph Jordan of the University of North Carolina, who has extensive experience in Latin American issues. As a part of her research, Cynthia interviewed prominent scholars, activists and individuals who knew or knew of Hugo Chavez’s leadership and legacy on race.

Antioch University’s PhD in Leadership and Change program is one that fosters scholarly inquiry and knowledge for personal and community liberation. The philosophy of Antioch University can be summed up in the words of the first Antioch College president, educator and Congressman Horace Mann of Massachusetts: “Be ashamed to die until you have won some victory for humanity.”

Antiochians also count the famous among their number: Comedian Dave Chappelle’s father taught at Antioch College and, before that, Coretta Scott studied education there in the days before integration was legal and before she married Martin Luther King Jr.

Dr. McKinney has written two books and several articles, some listed below: 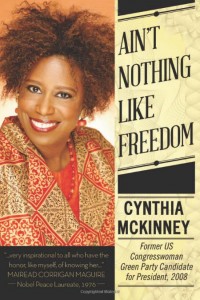 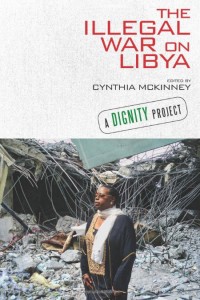 A few of Cynthia’s chapters and articles

Chapter: “Libya, Syria, Venezuela, Ukraine: Another War Based on Lies, Pretexts, and Profiteering?” in “Flashpoint in Ukraine: How the US Drive for Hegemony risks World War III,” edited by Stephen Lendman. Clarity Press, 2014

Dr. McKinney served 12 years in the U.S. House of Representatives. Her dissertation can be downloaded here: http://aura.antioch.edu/etds/208/. Following is an account she wrote in January on the significance of whistleblowers, of the information they reveal and of the dearth of that material in academic literature.

I am in the process of writing my dissertation on Hugo Chavez. I am in the final days, actually, of the writing and editing process, and all of a sudden I find myself severely constrained by recent events. WikiLeaks is a treasure trove of information for academic research. Yet, in a library search that I did three days ago, in preparation for a question from my Dissertation Committee on the status of my use of WikiLeaks sources, I found that only 35 articles had been published in peer-reviewed academic journals.

In those articles, not a single author had referenced a single WikiLeaks document, nor did any of those articles provide a link to any WikiLeaks document. At the time, I concluded that the academic community was an extension of The State rather than an extension of The People with a responsibility to oversee and question the activities, policies and behavior of The State.

Then, yesterday, I received a message containing the British Broadcasting Corporation (BBC) news of the sentencing of Barrett Brown because he posted links online to the Stratfor emails that were posted on WikiLeaks.[1] Brown did not hack Stratfor but, as an investigative journalist, reported on the content of the hack and provided links to his readers.

There have been many news articles about the fact and the content of the Stratfor e-mails.[2] As well, information points to a Federal Bureau of Investigation (FBI) informant being involved in the hacking of Stratfor, which raises a whole host of other questions about the continued unlawful conduct of the U.S. government.[3]

Despite several news articles containing sensational information on the Stratfor hack, again, a search of peer-reviewed journals that I conducted just now revealed only one article in a computer-related journal. Therefore, whether the topic was WikiLeaks or Stratfor, the academic community is basically missing in action in examining and investigating this extremely important information.

With this in mind, I really shouldn’t be surprised to see a lack of the use of WikiLeaks documents, even though the information contained could lead to critical insights on U.S. public policy. Most importantly for those of us who expect to create change in U.S. domestic police state and foreign military policy, it is the most controversial of such documents that deserve scrutiny from not only journalists, but also from the academic community.

The operation of the Deep State is real and must be exposed if return to constitutional rule and the Bill of Rights is possible. Thus, not only are the young people who broke into an FBI office and found and publicized the COINTELPRO papers heroes, so too are our modern day sunshine activists at Cryptome, Narconews, Wayne Madsen Reports and WikiLeaks. Whistleblowers like John Kiriakou, Chelsea Manning, Edward Snowden and Jeffrey Sterling, who are either already in jail or in exile until a new United States is created by the rest of us, are modern-day profiles in courage.

The operation of the Deep State is real and must be exposed if return to constitutional rule and the Bill of Rights is possible.

Barrett Brown joins them in exposing illegal behaviors for which we, the people of the United States, share ultimate responsibility. Therefore, we also bear the responsibility to stop these actions being done in our name with our tax dollars. Brown’s case even received mention on the popular Netflix series, “House of Cards.”[4] On Jan. 23, 2015, he was sentenced to 63 months for copying and pasting a link to a publicly available file.

The Obama administration has compiled a remarkable record of attacks upon, rather than lauding of, whistleblowers who expose illegal government activities. Lee Ann McAdoo at Infowars.com called Brown’s sentence an attack on free speech.[5] Even a critic of Brown’s says that “the charges against Brown give me shivers as a journalist.”[6]

Today, with few notable exceptions, Congress has capitulated and done nothing to stop both the egregious activities exposed by the whistleblowers and the mistreatment of the whistleblowers. Thus, both the Obama administration and the elected congressional representatives of the people of the United States, sworn to uphold the Constitution, have made it clear whose side they are on – and it’s not ours or Barrett Brown’s.

The Obama administration has compiled a remarkable record of attacks upon, rather than lauding of, whistleblowers who expose illegal government activities. Today, with few notable exceptions, Congress has capitulated and done nothing to stop both the egregious activities exposed by the whistleblowers and the mistreatment of the whistleblowers.

So, now, what does all of this have to do with Hugo Chavez?

I am writing my dissertation on Hugo Chavez. And the released COINTELPRO and Church Committee Reports only place the opposition to Chavez in historical context. The very same links that got Barrett Brown into trouble (instead of the culprits who committed the heinous acts) reveal a contemporaneous attack on the Bolivarian Revolution that even the CIA World Factbook admits succeeded in drastically cutting Venezuelan poverty; it was praised by UNICEF[8] for decreasing infant mortality and childhood hunger, by UNESCO[9] for the distribution of laptops to all elementary and high school students and by the United Nations for reducing income inequality.

The attacks on the Bolivarian Revolution included efforts to undermine Chavez’s leadership inside Venezuela, in the region and in his international efforts. For example, Chavez championed the Africa South America Summit, and the Obama administration undermined Chavez’s efforts to coordinate South American countries with their African counterparts culturally, economically and militarily.

In fact, the Africa South America Summit was to be held in Libya the year that President Obama launched the seven-month “kinetic activity” that completely destroyed Libya. President Obama’s action also prevented the institutionalization of military cooperation between the two continents intended to protect their sovereignty and independence.

Criminals in positions of authority inside our government use the power of their positions to cause those of conscience to cower who would act to stop the rampant crime spree that passes for U.S. domestic and foreign policy. They make examples of national security whistleblowers at a time when the national security state is expanding well beyond the benchmarks set by the Church Committee and that the senator characterized as “illegal and un-American.”[10]

Among the 535 members of Congress today, there is not a Frank Church to be found. And President Obama has proposed legislation to Congress that would make going after investigative journalists even easier.

As for me, how can I succumb to an academic research regime that, out of fear of government reprisal, requires, in essence, complicity in the cover-up of criminal or unsavory behavior by governmental actors? Does acquiescence to this fear have the effect of making academic research that addresses real political problems as irrelevant to citizens of conscience and action as the so-called mainstream media?

Right now, as I embark upon a new way to solve our problems as a country and community in academia, I feel that an important tool, made available to the public because of the sacrifices of conscientious whistleblowers, is being taken away from us. I feel that criminals inside the government are orchestrating a massive cover-up, insuring their impunity.

So, let me get busy deleting links, eliminating text and undoing images in my dissertation that would have provided clear evidence to the people of the United States that their government is actually engaged in behavior too offensive otherwise to believe. Something important to the health of our country is certainly being lost and, for me, this is a sad recognition, indeed.

© Cynthia McKinney, former six-term Georgia congresswoman and Green Party presidential candidate, can be reached at Cynthia@runcynthiarun.org and on Facebook at CynthiaMcKinneyOfficial. Subscribe to her Updates at http://lists.allthingscynthiamckinney.com/listinfo.cgi/updates-allthingscynthiamckinney.com. She wrote this story Jan. 24, 2015, and it was previously published by NSNBC International and YourWorldNews.

[4] BDC Wire, “Who is Barrett Brown and Why is ‘House of Cards’ Talking About Him?” located at http://www.bdcwire.com/who-is-barrett-brown-and-why-is-house-of-cards-talking-about-him/, accessed on Jan. 24, 2015.

[9] UNESCO is the United Nations Educational, Scientific, and Cultural Organization.

[10] The entire Church Committee Reports are available online at http://www.aarclibrary.org/publib/church/reports/contents.htm, accessed on Jan. 24, 2015.