New Orleans – As we approach the 10th anniversary of Hurricane Katrina, let’s not ignore the “elephant” in New Orleans, notwithstanding the pressure to do just that. The elephant in our city is the rampant land grab displacing predominantly African American residents to the outskirts of the city, where public safety, reliable transit, nearby schools, accessible job opportunities and neighborhood amenities are lacking. To be sure, the displacement of mostly African American residents also creates hardships for white New Orleanians who are not only out-financed by developers and incoming residents, but also see their salaries not keeping up with the rising costs of housing, education and healthcare in this city.

The elephant we need to address in New Orleans is the privatization of public assets. Just recently, Rep. Neil Abramson introduced House Bill 694 in the state legislature. Abramson’s bill would require the Orleans Parish School Board to sell any building or land that is “vacated or slated to be vacated” to a school charter company for an amount “up to fair market value” and allow the school charter company to re-sell the building or land to any “person or entity.”

If this bill passes into law, there are some 100 properties in neighborhoods across New Orleans that can now wind up in the hands of developers after the initial purchase from the Orleans Parish School Board for a nominal amount.

We cannot ignore the elephant represented by the billions of taxpayer dollars poured into the coffers of private companies that profit from:

The elephant we need to address in New Orleans is the privatization of public assets.

Sadly, the elephant in our city has no regard for the health and safety of children and families. Case in point: The Recovery School District (RSD) plans to build a school on a site where an old city dump once existed and the land remains highly contaminated. On this dump, known as the Clio Street-Silver City Dump, the Booker T. Washington High School, the Calliope Housing Development and the Rosenwald Recreational Center were built specifically for African Americans during Jim Crow.

There was no consideration at that time of the serious health risks of placing children and families on a waste dump. While some have excused this as something from the bygone era of Jim Crow racial segregation, it is troubling that the same shameful lack of concern for African American children and families persists in the post-Katrina building of the Yvonne Marrero Apartments, the new Rosenwald Recreational Center and the RSD’s plan to build a school on the same waste dump.

Shrouded in secrecy, the elephant in our city shuts New Orleanians out of the decision-making process on key policies, programs and funding priorities. In hindsight, the Unified New Orleans Plan and the Bring Back New Orleans Plan were distractions that moved our collective focus away from the billions of taxpayer dollars spent on implementing other plans that continue to displace residents.

Shrouded in secrecy, the elephant in our city shuts New Orleanians out of the decision-making process on key policies, programs and funding priorities.

As the spotlight turns to New Orleans on the 10th anniversary of Hurricane Katrina, will we address the elephant in our city or will we be silent about the injustice and inequity of ongoing displacement of predominantly African American residents in our city?

Well folks, I thought I had seen it all; but I have not. If you just have a feeling that your neighborhood is changing, hold onto it because the change is not over yet. New Orleans East is the fastest growing district in the city, but not in the way that could be described as progressive.

Poorer African Americans, the working class and the extremely poor are being pushed out to the East by the staggering increases in rents in their childhood neighborhoods and by developers and new land owners capitalizing on the housing shortage in this city.

New Orleans East is the fastest growing district in the city, but not in the way that could be described as progressive.

With the tear-down of affordable housing developments in New Orleans, without adequate rebuilding of replacement housing and with the lockout of poor residents from the new mixed income developments that replaced the demolished public housing projects, the city is being transformed.

There is a new set of landlords in town. Many disguise themselves as missionaries, but a more adequate description would be new “carpetbaggers,” who are working alongside their Southern sympathizers in this transformation. These church-based organizations buy apartment complexes formerly designed for use by adults with one or no children. Non-profit organizations and others are acquiring bonds to purchase these properties.

As we watch large numbers of poor African American women, children and the elderly pushed out of their neighborhoods and former housing projects into complexes not built for families that have no green space for children, our hearts break. It is difficult to watch our people walking in areas with no sidewalks, down service roads at night with no lights, no access to grocery stores and limited transportation.

There is a new set of landlords in town. Many disguise themselves as missionaries, but a more adequate description would be new “carpetbaggers,” who are working alongside their Southern sympathizers in this transformation.

Some homeowners decided to protest and become opponents of the continuation of the sale of these properties to organizations with bad records. But more so, to the proliferation of a pattern that nationally has proven successful for realtors and developers, but not for African Americans.

This protest by homeowners in the East, however, is being met with unexpected resolve and venom by the new “carpetbaggers” attempting to expand this practice and their profits. One landlord representing a church organization organized a protest against the neighborhood associations opposing this hostile takeover of our community.

A group of mostly white protesters actually held signs on Crowder Boulevard, proclaiming that this neighborhood did not want poor people to live here. It was an unbelievable sight to see. But it tells us that these people will stoop to any level and stop at nothing to continue their scheme.

These people will stoop to any level and stop at nothing to continue their scheme.

All of a sudden, Black people don’t like poor people. Well for most of us, that would be the rest of our entire families. How absurd.

Undeniably, the shift in population tells a different story. It seems that the plans for the “New” New Orleans include the pushing out of thousands of poor African Americans with the intent of concentrating families in the East and any other suburb where they can be pushed out of the city.

A continuous mantra of liberals and some conservatives on what to do with the large concentration of poor African Americans in housing projects was the deconcentrating of poverty. In other words, a healthy outcome cannot be expected when communities are made up of mostly large concentrations of poor people.

The answer to the poverty question was merely to move poor people around, not improve employment opportunities as would be expected to solve the problem of poverty.

It seems that the plans for the “New” New Orleans include the pushing out of thousands of poor African Americans with the intent of concentrating families in the East and any other suburb where they can be pushed out of the city.

If the truth were told, this dispersing of the poor is really the reconstruction of housing projects without the benefit of green space and convenient access to amenities.

The question that is being asked by many New Orleans East homeowners is why housing projects are not good for this community in certain areas but are perfectly suitable for African American middle to upper-middle income suburbs. This new found religion for housing the poor did not include reconstructing affordable housing in the city.

The “new” housing projects are former apartment complexes built for adults, but will soon be home for mostly women and children. Ironically, most of our leaders seem not to have a problem with filling every apartment complex in the East with poor residents and building huge complexes in the same area for 100 percent rent subsidy recipients.

Eastern New Orleans represents the designated area for the re-concentration of the poor. Oh, but it’s a secret! We are not supposed to recognize this occurrence. We should not notice the increase in traffic, trash, noise, violence and other negative disamenities encroaching upon our community.

We should not notice the lack of upkeep of the apartment complexes and walking spaces along the boulevard or our diminishing property values. But if we do notice these things and complain to property owners, our city and state representatives and our neighborhood associations organize to advocate for the safety and beautification of our neighborhoods but without the poor, implying, “We hate poor people.” There seems to be a whole set of different rules for us that don’t apply to others.

Well, we are not accepting their reality and will not be shamed by lies of self-hatred and disregard for poorer African Americans. This is patently untrue and defies the reality of living, loving and owning property in the East.

While the reputation of the East has been defamed almost in tandem with its change to a majority African American community, homeowners have continued to return home in large numbers to the East. It is our neighborhood and we will fight to maintain its dignity.

Dr. Beverly Wright is a sociologist and the executive director of the Deep South Center for Environmental Justice in New Orleans, Louisiana. She can be reached at Dillard University, 2601 Gentilly Blvd., New Orleans, LA  70122, 504-816-4005, or through her website, at http://drbeverlywright.com/index.php/contact-footer. 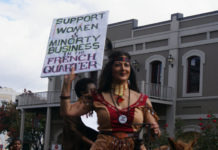