If you live in or visit Oakland neighborhoods like the Elmhurst District – what folks refer to as “Deep East Oakland” – you’re used to police helicopters hovering in the general airspace above you for periods of time. Mostly they appear during police chases, swinging around in wide circles, searching the ground below for suspects. It’s become such a common flatlands occurrence that – like triggered car alarms – you hardly notice them any more. 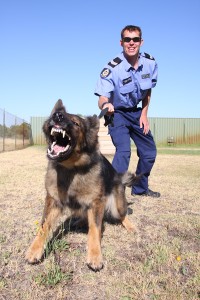 I’m not certain exactly when they began, but this summer I’ve begun noticing that OPD’s helicopter corps have added a new “service” that has certainly gotten our attention. I don’t know the official name, but you can call them “Public Beware Notices from the Air.” Instead of simply silently circling, observing and communicating to officers involved in the chase, where, now, under certain circumstances, the helicopter police have begun blaring out warning announcements to the public below through some sort of loudspeaker or bullhorn system.

As far as I can guess, the warnings or announcements are repeated over and over, and go something like: “Stay in your house!” “We’ve set police dogs loose!” “Stand still if you see them! Do not run from the dogs or they will bite you!”

Anyway, there are certainly more things that could be shouted at you from out of the sky on a summer afternoon, but I can’t think of many more disconcerting than “Watch out! We’ve let the dogs out!” since there is an implicit message that regular residents, not just the suspects, are in danger of a dog attack.

The police helicopters and OPD’s regular on-the-ground forces rarely bother to tell residents to stay inside when a “regular” non-dog search is going on. Therefore, the assumption has to be made that the dogs pose a danger to civilians and suspects alike and that the dogs have a difficulty in differentiating between the running suspect that the police are seeking and a running resident who is simply scared as hell of a loosed police dog. And if that’s not true, why make the helicopter announcements in the first place?

You have to understand that these warnings don’t come at you from the kind of state-of-the-art sound system that you see at a Coliseum concert. The sound is somewhat garbled and inarticulate, even during the time when it’s coming from directly above.

“Stay in your house!” “We’ve set police dogs loose!” “Stand still if you see them! Do not run from the dogs or they will bite you!”

And, of course, the police helicopters, during a chase, are rarely simply hanging in the air in one place. Instead, they generally travel in a wide circle around a designated collection of city blocks, so that sometimes the warnings are directed towards you, sometimes away. You can’t hear it clearly at all while you’re inside, so you have to go out in the yard to get a good listen, and even then it’s difficult to translate. Before I finally figured what the police were trying to tell us, it took several passes and repeats, some careful listening, and consultation with neighbors and passersby to figure out what was being broadcast.

And that doesn’t account for residents who don’t hear the messages at all because they’re watching television inside or listening to music outside or they’re hard of hearing, and, therefore, wander out into the “danger zone” uninformed.

Meantime, the Elmhurst District – like most Oakland neighborhoods – has a high number of people who are non-English speakers. In Elmhurst’s case, it’s folks whose native language is Spanish. The helicopter dog warnings are given in English-only, and, as I’ve explained above, not in the type of English you’d be subject to in an ESL class or on a Rosetta Stone disk. It appears, therefore, that anyone within the dogs-turned-loose area who is not sufficiently proficient in understanding spoken – or, more particularly, bullhorn-shouted – English is pretty much shit-out-of-luck.

A second thought. When I was growing up in the Cold War era of the 1950s, we had periodic air raid simulations at school to prepare us for what to do in a possible nuclear bomb attack. An air horn would blare out from somewhere, and we would all duck under our desks and cover our heads. After a certain period of time, the horn would give out an “all clear” blast, by which we knew that the test was over, and we could all get out from under our desks and resume our schoolwork.

The OPD helicopter dog-warnings, on the other hand, come with no “all clear” announcement. After a time, the warnings simply stop. You’re left to figure out for yourself if that means the police dogs are gone and it’s safe to go outside again.

The OPD helicopter police dog-warnings tell residents to stay in our homes because police dogs have been loosed, but what about those residents who are out and about in the street when the announcements come? Presumably, if you happen to be on International Boulevard or certain portions of Bancroft or MacArthur, you can duck into a store or restaurant for the time being.

But what if you’re out on one of the side streets, far from your house, when you hear the dog-warning? The Elmhurst is not the sort of place these days where you can simply run up to a stranger’s house, knock on the door, and get safety inside because police dogs are running around in the street.

The OPD helicopter dog-warnings come with no “all clear” announcement.

That leads directly into a final set of questions.

First, who in their right mind thought it was good idea in the first place to let police dogs off their leashes in any Oakland residential neighborhood or commercial district, dogs that, presumably, have difficulty seeing the difference between residents and suspects but are a danger to chase anyone who runs?

Second – and you knew this one was coming – we know that suspects rob and shoot in the hills as well as the flats. Does that mean that the loosed police dogs – and the accompanying helicopter warnings – are carried out in the Grand Avenue-Lakeshore district and the Laurel and along Broadway in the uptown or College Avenue, for example, or is this simply a Lower Bottoms and Fruitvale District and Deep East Oakland affair?

I suppose we can assume that Oakland police have been using loosed police dogs in their chases and searches for some time. Perhaps police officials think that adding the helicopter announcements is a step forward, constituting “fair warning” to non-suspect residents. It’s a warning, yes. But hardly fair.

Oakland journalist Jesse Douglas Allen-Taylor can be reached at safero@earthlink.net. This story first appeared in CounterPoints, where Allen-Taylor solicits donations via PayPal.

Who’s making the rules? Time added to sentences for our brothers at the fire camp