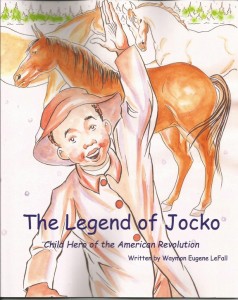 The recent massacre in Charleston has put racist Southern symbolism on center stage in the U.S. media. While television talks on and on about the Confederate flag, very few people know the identity of the little Black lawn-boy statue whom affluent white people have been putting in their front yards since the end of the American Revolution.

Jocko is the name of the boy who froze to death holding horses in place for the slave-holding president George Washington. Years later when having statues of Jocko on the lawn became trendy, abolitionists working with the Underground Railroad used to covertly decorate these statues with different color cloth to signal to runaways where the safe houses were.

It is important for Black people to know both of these stories about Jocko and his statue because they are markers in the history of this nation that point to our history in America’s caste system. Here is author Waymon Lefall as he talks about the history of Jocko and his reason for writing the children’s book, “The Legend of Jocko.” Check him out in his own words.

M.O.I. JR: How did you come to study the history and legend of Jocko? What prompted your interest?

Waymon Lefall: After serving time in the U.S. Army and receiving my honorable discharge, I met a great man by the name of Mr. Earl Koger Sr., who had been studying the history of the little Black boy statue. Mr. Koger hired me on to work for his newspaper, Good News.

While working and studying under Mr. Koger, I learned a great deal about the little Black boy statue, known as Jocko Graves. Mr. Koger explained to me how the statue came to be.

M.O.I. JR: Why do you think it is important for Black people to know who Jocko is and what he stood for?

Waymon Lefall: It’s important for all people to know who Jocko is because he played a big part in the history of our country and sacrificed his life by holding horses for Gen. George Washington at the crossing of the Delaware River on Dec. 25, 1776, standing all night with the horses through cold and snow, and froze to death – never leaving his post. 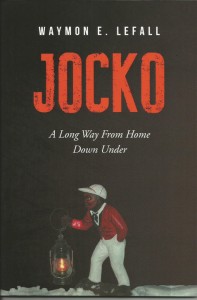 M.O.I. JR: Why is he known as the first American children’s hero?

Waymon Lefall: Jocko is known as the first American child hero because he was with George Washington, the first president of the United States, in the war of 1776 when he sacrificed his life at 12 years of age.

M.O.I. JR: What role did Jocko statues play in the Underground Railroad?

Waymon Lefall: Jocko statues played the role of pointing to safe houses for escaped slaves during the underground movement by having bright color cloth tied to his body to show escaped slaves the way to freedom.

M.O.I. JR: Why did you write two books about Jocko?

Waymon Lefall: “Jocko: A Long Way From Home Down Under” was written to show how I got from point A to point B creating a paper trail. “The Legend of Jocko” was written so that children could understand the story of Jocko with not only words, but with pictures of his deeds.

M.O.I. JR: How do you feel about the debate about Southern symbols like the Confederate flag?

Waymon Lefall: I think all symbols that represent hate should be put in a lock box along with the key.

M.O.I. JR: Are you working on any other children’s books?

Waymon Lefall: At present I am working on a book about my life here in Baltimore and the trials and tribulations of a Black business man. No more children’s books at this time.