One of the fathers of political Hip Hop on the West Coast is still at ‘em and getting ready to strike again with the Sept. 11 Guerrilla Funk release of “Pistol Politics.” The rapper Paris’ career has survived through three generations of political Hip Hop most personified by acts such as Ice Cube, 2 Pac, Public Enemy, Poor Righteous Teachers, X Clan, The Coup and Askari X, then the second wave consisting of dead prez, Mos Def aka Yasin Bey, Talib Kweli, Erykah Badu, Immortal Technique and Common, and now this third wave consisting of J. Cole, Kendrick Lamar, Ab Soul and the like. 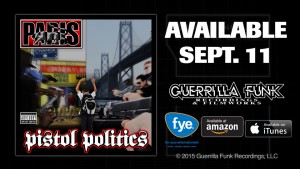 In this war to keep something funky in our ears and something relevant on our minds, Paris has been and still remains at the front line of revolutionary culture that actually makes it to average everyday people in the streets. Be on the lookout for Guerrilla Funk releases by George Clinton, T-Kash and Dj True Justice before the year is out.

Check out the Left Coast Hip Hop OG Paris, as he talks about “Pistol Politics,” his career and political rappers.

M.O.I. JR: Can you talk a little bit about how you got into rap? When did you turn it into a profession?

Paris: Peace bro, I hope you’re well. I got into it in the early ‘90s and have been doing it off and on ever since. I wouldn’t call it my main profession, but it’s a component of what I do and a necessary release for me to get things off of my chest. I’m fortunate to still have a label, still have global distribution, to still be able to tour when I want to and to have a voice that resonates with what many people feel.

M.O.I. JR: What prompted you to create Guerrilla Funk Records? And how many albums have you put out under this label?

Paris: I created Guerrilla Funk right after the terror attacks of 9/11. It was initially started as a safe haven for artists who found that many creative outlets were no longer available to them because of the wave of fear-induced “pseudo patriotism” at the time.

If you recall, those events made it difficult for anyone questioning the system to be heard, and many of us found ourselves without a creative home pretty much overnight. Many acts have participated in Guerrilla Funk releases: Public Enemy, Immortal Technique, dead prez, The Coup, P-Funk, KRS One and many more. I think we’ve had about 12 albums thus far. Always quality over quantity.

I created Guerrilla Funk right after the terror attacks of 9/11. It was initially started as a safe haven for artists who found that many creative outlets were no longer available to them because of the wave of fear-induced “pseudo patriotism” at the time.

M.O.I. JR: Besides an artist, what other role do you play with the label? How has that been working?

Paris: I own it but usually outsource the majority of work that needs to be done with the setup of any given release. It no longer makes sense to have a fully staffed label, and many companies offer specialty services that cover the important elements of launching a commercial release properly. I do that with the sales force for retail, publicity, tour tie-ins, sponsorships, licensing placements etc.

M.O.I. JR: Over the decades, how have you seen the progression of Black politics in rap music, now that we are post-Katrina, post-Oscar Grant and post-Ferguson?

Paris: There are far fewer voices representing a Black political agenda in rap now because record companies don’t endorse those types of messages. In fact, they’d rather have white artists that create Black music, if left to their own devices.

American popular culture loves everything about Black people but the people themselves – the style, the music, the trends, the dances, just pick one – so there has been no real progression of Black politics in rap. If anything, we’ve regressed.

We’re more apt to be accepting of everyone, even if their respective agendas are detrimental to ours, and we’re quick to dismiss things that should be of greater concern to us. I can’t tell you how many times I’ve heard some simple-ass artist saying racism is over, saying that “Black lives matter” isn’t necessary or coonin’ to do ANYTHING that makes them a little bread.

It’s sad, really. Going up against simple shit is like swimming upstream most of the time. Just look at Worldstar.

But what I will say is that those of us who remain in hip-hop who make politically poignant material are more apt to really get it in now, because so few of us have a voice and because many of us are more mature and recognize the seriousness of the times. And there are acts out there who get it in the younger generation too – J. Cole, Kendrick and Joey Bada$$ come to mind. Lupe too, though he’s got stripes now and has been in the game for a minute. But we’re still here.

There are far fewer voices representing a Black political agenda in rap now because record companies don’t endorse those types of messages.

M.O.I. JR: Over the years you have worked with other political rappers on your albums such as T-Kash, Kam, Ren, dead prez, Public Enemy and Immortal Technique. What have you gotten out of these collaborations? How do you feel about their particular styles?

Paris: It’s been cool. Of all those mentioned, T-Kash and Kam are the ones I actually have ongoing dialogue with, and I consider them my brothers. Everyone’s voice is important though, and many of these acts represent different regions and walks of life that are all working toward the same goals of social and economic justice.

Paris: I have no idea. I’ve done more than my part in that regard, though.

M.O.I. JR: I see you are gearing up for a George Clinton release. What was it like working with him? What does it sound like? When will the album come out?

Paris: The GC release, “We Come in Peace,” comes out in October and the new group is called Thang. It’s intended to be a continuation of the Parliament mythology of Sir Nose, Dr. Funkenstein, Starchild and the like, and it sounds MASSIVE.

Definitely was a long time coming and definitely was on my musical bucket list. George was hella cool. It was surreal gettin’ down with him because he was one of my musical heroes growing up.

I also have to plug the new T-Kash and DJ True Justice albums – both coming out Oct. 9, and both on Guerrilla Funk as well. Visit www.guerrillafunk.com for more info.

M.O.I. JR: Can you tell us a little bit about your upcoming release? How does it differ from past Paris albums, especially the classic “Sonic Jihad”?

Paris: Thanks for the compliment, bro. The new release is called “Pistol Politics” and is available everywhere Sept. 11. It’s my first double album, and it’s a fusion of some of the best gangsta and revolutionary rap talent ever, featuring E-40, WC, Kam, Tha Eastsidaz, dead prez, T-Kash and more.

It’s a musical statement of solidarity – and a much needed united front – against oppression and institutional racism in an age almost devoid of political and social commentary in urban entertainment. We go in on society’s ills and we celebrate its virtues, emphasizing themes promoting unity, progression and community upliftment.

Usually you’ll find conscious acts trying to be more street to appear credible. On this album, the opposite rings true, as I feature talent that was very much involved in street life but is now revolutionary. Very powerful – and very necessary right about now.

The new release is called “Pistol Politics.” It’s a musical statement of solidarity – and a much needed united front – against oppression and institutional racism in an age almost devoid of political and social commentary in urban entertainment.

M.O.I. JR: Where can people buy the record?

Paris: It’ll be available everywhere Sept. 11 in both physical and digital formats. Local music stores will be carrying it, so be sure to support our indie merchants!