“Asni: Courage, Passion and Glamor in Ethiopia,” a documentary about the legendary, controversial and provocative Ethiopian musician and actress who was at her height in the ‘50s-‘60s in Addis Abba, Asnaketch Worku, will be screened on Friday, Sept. 25, 7 p.m., Starline Social Club, located at 645 W. Grand Ave. in Oakland.

For people who are interested in artistry from around the world, music and culture like myself, I can say that this is a great film. For people who are into the culture-changing artistry of people like Billie Holiday, Nina Simone, Serena Williams and Lauryn Hill, you may be into this film.

“Asni” taught me a little bit about Ethiopian culture in the ‘50s and ‘60s and the hard cultural struggle that it took for artists, specifically women artists, to be included and respected for their contributions to the culture and society.

“Asni” is a beautiful biographical look at a beautiful, confident, talented and mysterious woman who added substantially to Ethiopian culture. You’ll see how Ethiopians look at themselves and how they are looked at from around the world.

Check out filmmaker Rachel Samuels as she speaks on her majestic cinematic portrait of the great Ethiopian musician and thespian Asknaketch Worku.

M.O.I. JR: What inspired you to do a film about Asnaketch Worku? How did she respond when you asked her?

Rachel Samuel: Asni was a woman I have always admired and was curious about since I was a little girl. Destiny brought us to meet a few years ago, and I met her at her two-room house, bedridden, half paralyzed with rheumatoid arthritis. I was so taken by her sense of freedom, passion for life and complete honesty.

I thought it was important to record her story and so I blurted out, “I want to do a documentary film on you.” She was not interested at first. She took her time before answering: “Why? And who are you?”

M.O.I. JR: When you met her, was she how you expected her to be?

Rachel Samuel: I wasn’t sure what to expect when I saw Asni. I remembered her from when I was a very little girl, stunning, playing her krar on black and white TV and now she was older and sick. I was shocked.

But the shock didn’t really last for more than five minutes. She started telling us stories from her past. I was mesmerized, laughing for hours. I wanted to know more and share with the world what I knew about her.

M.O.I. JR: Can you talk a little bit about how her lyrics impacted Ethiopian culture of the ‘50s and ‘60s?

M.O.I. JR: Why were artists despised in this era of Ethiopian history?

Rachel Samuel: Artists were often called the derogatory term “azmari,” which means those deemed by the church as not going to heaven. It was not thought of as a noble career. Artists had a difficult time attracting marriage prospects because of their career.

M.O.I. JR: What was the role of the azmari or artist in traditional Ethiopian society?

Rachel Samuel: Artists were the voice of the people. They would express the sorrows or the displeasure of the society and voice it via music, usually playing instruments like the krar or the masinko at a tavern.

In ancient times before newspapers, emperors would send their assistants to listen to these azmaris at these taverns so they knew what kind of mood the people were feeling about their emperor and the state of the country.

M.O.I. JR: What was it like for Asnaketch to be a woman azmari in this era?

M.O.I. JR: As I told you before this interview, I saw the NWA movie in the same week as I saw “Asni” and noticed a lot of similarities in how Asni and NWA affected young culture at the time. Do you see any similarities?

Rachel Samuel: There are very few artists who come in our lifetime who have a profound influence in the way we think – and who can break down barriers of culture. Asni was a trailblazer in Ethiopia in the 1950s-1960s for women at that time. She showed society that women could define themselves and didn’t need men to tell them what to do and how to behave – regardless of how anybody thought about her and judged her.

M.O.I. JR: Why did traditional Ethiopian society look down on Asnaketch’s hairstyles, her choice of clothes and her makeup? What did it mean to dress like a foreigner in this era?

Rachel Samuel: It wasn’t just the fact she was wearing Western clothing only, but also how risqué and sexy her outfits were. People were not exposed to the magnitude and daring chances she was about. Ethiopia at that time was a very traditional and super conservative society.

M.O.I. JR: How did the way she dressed, walked and smelled play into her mystique?

Rachel Samuel: She stood out and everybody wanted to be her or with her. She had lots of lovers, making her larger than life.

M.O.I. JR: Can you talk about Asnaketch’s impact on Ethiopian theater? How did the playwrights, actors and audience respond to her?

Rachel Samuel: Asnaketch was a very talented and a commanding actress. She was the very first female actress in a time when men played female roles. The audience loved her – shocked at her abilities, sexiness and knowledge of the craft.

She was given various roles and always controlled the stage. She opened the door for other female actresses after her.

M.O.I. JR: Can you talk about the role that Haile Selassie played in helping Ethiopia to develop a respect for theater?

Rachel Samuel: Haile Selassie built the National Theater, which still stands as the premier theater in Addis Ababa today. He would frequent performances, inviting not only his family but also other heads of state. This patronage created awareness and acceptance in the society.

M.O.I. JR: When you were with Asni before she passed away, what is it that she wanted people to remember most about her?

Rachel Samuel: She didn’t want people to forget her. She told me with this documentary she has the chance to always be remembered.

M.O.I. JR: What do you remember most about meeting and talking with her?

Rachel Samuel: I remember how frank, honest and transparent she was. This is rare to meet people who are so candid about, for instance, sleeping with married men and have no shame about it.

Rachel Samuel: I see a comparison in their background and struggle. 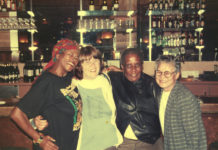