KPFA spoke to Father Thomas Nahimana and the U.S. State Department about accusations that Rwanda is training rebels to engage in cross border attacks to destabilize Burundi.

Speaking to the Associated Press, Tertsakian said: “There is definitely an anti-Nkurunziza armed group that has been formed already. These people have been hanging out in Rwanda for several months now. We believe it is happening.”

KPFA/Ann Garrison: What do you think about the unrest now, between Rwanda and Burundi?

Father Thomas Nahimana: I know and I think at the same time that Rwanda tries to destabilize Burundi now. They send their men into Burundi and that’s not good. We are for peaceful relations between ​neighbor countries – Burundi, Congo and Tanzania. And Uganda.

I do not know why Kagame has always to launch wars in that region. That must stop quickly because what Kagame is doing in Burundi is not good. And he wants – Kagame wants to provoke a genocide in Burundi.

KPFA: It looks, to anybody who’s been following along, that it could be a replay in which there are both Hutu and Tutsi massacres, but only the Tutsi massacres are reported, and then Kagame has a justification for invading Burundi – or occupying Burundi. 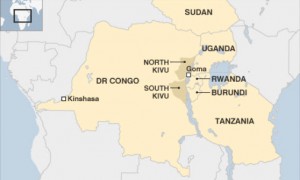 Nahimana: Yeah, we have read that in newspapers, because as it stands nowadays, Kagame and his team want to provoke a genocide in Burundi in order to put in power in Burundi the same group as the group which is in Rwanda. Everybody can see that. It is not complicated to see.

KPFA: And you’re actually afraid that Pierre Nkurunziza, the president of Burundi, is likely to be assassinated?

KPFA: Yes. We can’t explain all of this, but this would be the fourth Hutu president assassinated in this region since 1993.

KPFA: And that was Father Thomas Nahimana on the current conflict between Rwanda and Burundi.

KPFA also asked the U.S. State Department to comment, given the longstanding alliance and military partnership between the U.S. and Rwanda. Spokeswoman Katy Bondi responded: “We remain deeply concerned by reports of recruitment of Burundian refugees at camps in Rwanda for possible military training. We have asked the Rwandan government to investigate these reports and to hold accountable those responsible for unlawful conduct.”

In other words, the State Department said that it had asked the Rwandan government to investigate itself.