We the Indigenous people of this land stand in solidarity with Black Lives Matter and our Black brothers and sisters fighting to end the war on Black people in this country and around the world.

We recognize that the war on Black People is rooted in slavery, which enabled the accumulation of wealth and power needed for the genocide of Native Americans, the founding of the United States and the colonization of countries throughout the world. The suffering and exploitation that plagues all of our communities is rooted in this history of anti-Black racism for the development of capitalism.

We understand that this has contributed to the ethnic genocide of Indigenous peoples throughout the world and the kidnapping and enslavement of Africans.

We acknowledge that the oppression of our people links our struggles, but it is also our desire and constant fight for liberation that truly unites us.

We the Indigenous people of this land stand in solidarity with Black Lives Matter and our Black brothers and sisters fighting to end the war on Black people in this country and around the world.

Our solidarity with the Black Friday 14 and Black Lives Matter continues a rich history of peoples’ movements and international solidarity in the U.S., which is rooted in the legacy of Black resistance, organizing and leadership. From the struggle to end African slavery to the development of the Black Panther Party, which paved the way for the Red Power Movement that was birthed here on Alcatraz Island and spread across Turtle Island, the Black resistance movement in this country is centuries old and has long provided visionary and groundbreaking leadership for many oppressed communities demanding freedom in the U.S. and abroad.

We believe that the lack of urgency and responsiveness to both Black trans lives and the more than 1,200 Indigenous women who have gone missing is not a coincidence.

We believe the poverty and lack of equity that has been imposed on our reservations and in Black communities is not a coincidence.

We believe that the state sanctioned violence on Black and Brown bodies at the hands of law enforcement is not a coincidence.

And we refuse to allow the disparities that result from this intentional oppression on our people to divide our communities.

Just as we know Indigenous Life is Sacred, we know Black Lives Matter.

There is a state of emergency. From British Columbia to Ferguson, from the Amazon forest to Oakland, from Alcatraz Island to Minneapolis, we are demanding our freedom.

As First Nation people, we understand that OUR justice relies on the respect, appreciation and liberation of Black lives. Because if they can’t get it, we definitely won’t be seeing it. ‪#‎BlackLivesMatter!

Why are SF Supervisors hesitant to demand racial equity in policing and hold SFPD accountable? 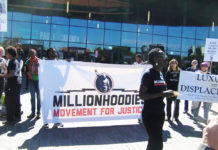