Charles Kambanda told KPFA that the West is trying to create a failed state whose resources will then be easier to control.

KPFA Weekend News Anchor Sharon Sobotta: After a failed coup attempt followed by six months of armed insurrection in the streets of Burundi’s capital, Bujumbura, the government issued an ultimatum, offering amnesty to insurgents who would lay down their arms by today, Saturday, Nov. 7. KPFA’s Ann Garrison has the story. 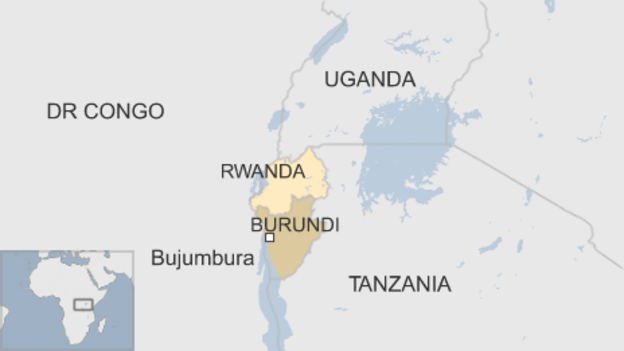 KPFA/Ann Garrison: Burundi is a tiny, landlocked nation bordering Rwanda, the Democratic Republic of the Congo and Tanzania deep in the heart of Africa. Its Hutu-Tutsi-and-Twa social groupings mirror those of neighboring Rwanda, and the two nations’ political struggles have long been intertwined.

After Burundian President Pierre Nkurunziza’s ultimatum to insurrectionists to lay down their arms, U.S. Ambassador to the U.N. Samantha Power and the International Crisis Group, a think tank headed by Western military, government and corporate officials, warned of massacres like those in Rwanda in 1994. In contrast, Charles Kambanda, Rwandan American attorney and former professor at the National University of Rwanda, describes the conflict as political and its larger context as an East-West power struggle for resources.

Charles Kambanda: What is really happening in Burundi is no different than what happened in DRC, in Congo. We have these multinational corporations, Western corporations, fighting for natural resources in that region.

The best way for these companies to conquer these natural resources is to create a situation where no government is in control. Burundi is now known for a type of natural resource called nickel and they say 6 percent of the world’s nickel is in Burundi.

And if we want to remember the geography of that region, Burundi borders with Congo, and Congo, the other side, is so rich in minerals. So we have these corporations fighting to control Burundi, to create a failed state in Burundi, so that they can get involved in illegal business in that region.

We have these corporations fighting to control Burundi, to create a failed state in Burundi, so that they can get involved in illegal business in that region.

But also, it is known that the Burundian government signed a contract with a Russian corporation to exploit the nickel in Burundi. The U.S. corporations that were interested in this contract did not get it.

So we have this fight now because some politicians who are sponsored by these corporations don’t want their clients to lose that contract. On the other hand, Russia is saying, “We cannot lose our resources in Burundi.”

This difference on the ground is what we see at the U.N., United Nations Security Council. The spokesperson for the United Nations secretary general made it clear that the council will never reach an agreement over Burundi issues because the superpowers are divided into two clear groups about Burundi, which is why the Western media is out there to present the government of Burundi as a failed government.

KPFA: President Nkurunziza and his government said that Burundian security forces would begin house to house searches for illegal weapons and insurgents who refuse to lay down their arms by today’s end.

The International Crisis Group called for U.S. and other donor nations to commit support for an “African-led peace implementation mission” in Burundi, but the regional will for such a mission has thus far been lacking. The U.S. and E.U. have succeeded in enlisting the African Union Peace and Security Council but not the East African Community or the South African Development Community.

Charles Kambanda also said that many in the region fear that if Hillary Clinton becomes president, she will instigate war and chaos in the region in the interest of U.S. hegemony.

Many in the region fear that if Hillary Clinton becomes president, she will instigate war and chaos in the region in the interest of U.S. hegemony.