by Lateefah Simon for BART Board District 7 Campaign

Over 200 community members, activists, union members, transportation experts, family and friends flocked to Oakland’s New Parish for non-profit leader Lateefah Simon’s kick-off fundraiser for her 2016 campaign to join the BART Board of Directors. Despite running as a first-time candidate, Simon has already built a broad coalition that includes some of the Bay Area’s top elected officials and civic leaders.

True to her reputation as a tireless community advocate, Simon spoke passionately about her personal connection to BART and her commitment to transit justice for working people.

“I actually believe that transit justice is central to our freedom,” said Simon. “I want to change the infrastructure of the Bay Area so it speaks to working people.”

Simon is running to represent BART District 7, which spans three counties and 19 cities, stretching from Hunters Point in San Francisco all the way to Crockett in Contra Costa County. If elected, Simon will be the only woman of color serving on the BART Board.

“I want to run so that law enforcement that oversees BART has some oversight. I want to run so that children who get on BART don’t have to pay the same as the million dollar counterpart that is riding with them. I actually believe that transit justice is central to our freedom,” said Simon. “I want to change the infrastructure of the Bay Area so it speaks to working people.”

“I support Lateefah for BART Board because of her incredible leadership in the Bay Area in fighting for the needs of youth and families, low income residents, people of color and others whose voices are not often heard in the community,” said Assemblymember Thurmond. “The people of my district rely heavily on BART to get to their job, school or business, and Lateefah will be a champion for public transit and transit justice.”

It is clear that Simon is committed to grounding her campaign in fighting for people who are often overlooked by entrenched political bureaucracies – work that is familiar to her after decades of leading programs that advocate for marginalized communities.

“The way I see it, everyone is equalized on BART,” said Simon. “Everyone waits on the same platform to pack into the same trains to go to work.

“But if folks can’t access BART easily because they’re elderly or disabled, and if mothers can’t rely on BART to get them home in time for daycare pick-up, then vulnerable communities cannot access all the economic opportunities the Bay Area has to offer. To me, equal access to BART means equality of opportunity.”

As gentrification and economic justice issues continue to spark debate across the Bay Area, Simon’s platform seems well-placed. Communities of color who have been displaced from the Fillmore, where Simon grew up, to the far reaches of the BART system like Richmond, Pittsburgh and Fremont now pay significantly more to commute to San Francisco’s economic center. Simon plans to advocate for progressive policies like affordable housing near BART stations and means-tested fares.

BART’s labor unions believe Simon will be a strong voice for the system’s workers as well. Simon has already secured the endorsements of all three unions representing BART employees – AFSCME Council 57, ATU 1555 and SEIU 1021.

Simon is confident she can uphold an agenda for affordability and innovation at BART, while maintaining competitive wages and benefits for BART workers. The problem, she says, is not one of workers vs. riders but rather one of chronic underfunding.

“We don’t invest in infrastructure and that’s a problem – for the economy, for the environment and especially for communities of color across the Bay who rely on this system to get to and from their jobs,” Simon said. “I have spent my career fighting for people who our society forgets about, or would prefer to ignore, and along the way I have managed to make a lot of people listen and decide to do something about it. I will use my voice and my relationships within California’s leadership to do the same for BART.”

It is clear that Simon is committed to grounding her campaign in fighting for people who are often overlooked by entrenched political bureaucracies – work that is familiar to her after decades of leading programs that advocate for marginalized communities.

Simon started making a name for herself in her community at age 19, when she was appointed executive director of San Francisco’s Center for Young Women’s Development (now the Young Women’s Freedom Center). At the time, she had a newborn daughter, an experience she wrote about last month in an article for Medium.com.

Nonetheless, her tenure attracted the attention of the MacArthur Foundation, which made her the youngest woman to receive a MacArthur “Genius” Grant at age 26, and that of then District Attorney Kamala D. Harris, who recruited her to head up San Francisco’s first reentry services division.

Simon went on to lead the creation of Back on Track, a national model program for anti-recidivism, serve as the executive director of the Lawyers Committee for Civil Rights of the San Francisco Bay Area, and she is currently program director at the Rosenberg Foundation, which focuses on immigrant rights and criminal justice.

As in all her work, when elected Simon will work intensely to ensure that BART is a model for working with, hiring and supporting communities of color, disabled folks and families who depend on the system. Acknowledging that there is deep work to do in this area, she says she’s up for the battle.

Running for office is certainly a new kind of challenge for Simon; however, it’s clear that her campaign will reflect a commitment to her values and that in a short time has already secured a formidable coalition of supporters to advocate alongside her.

Learn more about Lateefah Simon and her platform at www.LateefahforBART.com and follow her campaign on social media at www.facebook.com/lateefah.simon and @lateefahsimon on Twitter. 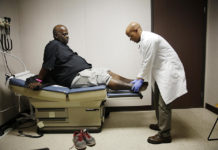 Question marks, the elephant in the room and the refusal of nuclear power defenders to consider what has happened to people and the environment...