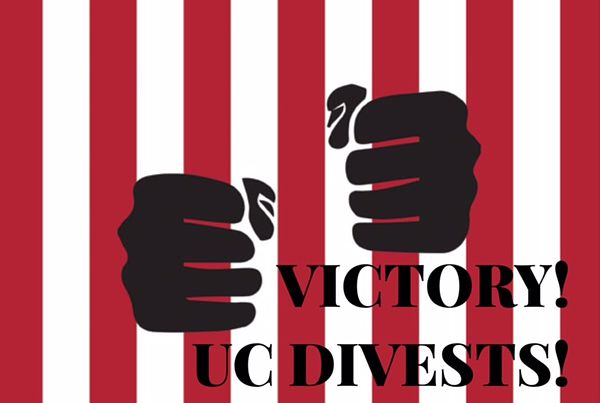 After months of research, conversations with the University of California and steady pressure from the Afrikan Black Coalition against the UC’s complicity in the prison industrial complex, ABC confirms that the UC has begun selling all their shares in private prisons. This victory follows an initial November press release from the Afrikan Black Coalition announcing the University of California’s investments in private prisons and a unanimous vote from Black Student Unions calling for divestment from private prisons and their financiers.

ABC Political Director Yoel Haile states: “This victory is historic and momentous. Divesting $25 million is a good step towards shutting down private prisons by starving them of capital.

“This is a clear example of Black Power and what we can achieve when we work in unity. This victory belongs to the masses of our people languishing behind America’s mass incarceration regime.”

“This is a clear example of Black Power and what we can achieve when we work in unity. This victory belongs to the masses of our people languishing behind America’s mass incarceration regime.”

UC Chief Investment Officer Jagdeep Singh Bachher broke the news to ABC staff in a meeting at Bachher’s office in Oakland on Friday, Dec. 18, 2015. Bachher stated that he would partner with the Afrikan Black Coalition and has pledged to inform each UC Chancellor – and financial institutions with whom the UC maintains a relationship – about the UC’s decision to sell all holdings in private prisons.

Bachher maintained that as a matter of policy, the UC does not divest, but “looks at things from a sustainable investment framework.” This decision makes the University of California the second U.S. educational institution to divest from private prisons after Columbia University’s decision to divest in 2013, as a result of relentless organizing by Black students and allies.

The University of California is clear that investments in these corporations are financially unsustainable and now stands as the first public education institution to denounce the private prison industry. In addition, Black students have declared private prisons to be morally rotten and ethically compromising to the mission of any educational institution.

Black students have declared private prisons to be morally rotten and ethically compromising to the mission of any educational institution.

Our position on private prisons has been clear from the very beginning; we want them outlawed and out of business. The University of California has sold all but $2 million of its holdings from private prisons and is in the process of selling the remainder of their holdings by Dec. 31, 2015. Following this historic victory, many invigorated supporters are now asking: Where do we go from here?

As our ABC Divestment Resolution demands, divestment from private prisons by the UC is not complete until the $425 million invested in Wells Fargo Bank is dealt with appropriately. Wells Fargo Bank has never been the ally of Black, working class and migrant people or the intersection thereof.

Like many banks, Wells Fargo is well known for their discriminatory lending practices in Black and Brown neighborhoods. Wells Fargo also acts as a syndication agent and issuing lender on CCA’s $900 million line of credit, serves as a trustee to Geo Group’s $300 million corporate debt and is a Million Shares Club member.

As a Million Shares Club member, Wells Fargo owns over a million shares in CCA and Geo Group, effectively financing the dehumanization of Black and migrant people. The private prison industry shows little concern for our people and demonstrates few signs of stopping without direct action from organizations like Enlace, Responsible Endowments Coalition and ABC.

Unless Wells Fargo immediately cancels all of its business relationships with private prisons, the $425 million the UC has invested in Wells Fargo must be divested immediately. ABC Field Organizer Kamilah Moore states:

Unless Wells Fargo immediately cancels all of its business relationships with private prisons, the $425 million the UC has invested in Wells Fargo must be divested immediately.

“In order for the UC’s mission to be fulfilled, it is imperative to assess investments not only from a risk perspective, but from a socially responsible perspective as well. Our campaign is not over. We will continue to call for complete divestment, increased transparency, and reinvestment in education and businesses owned or controlled by the formerly incarcerated.”

Wells Fargo’s direct financing of the prison industrial complex is morally bankrupt and incongruous with the UC’s sustainable centennial investing strategies. The UC Investment Report clearly states that “(a)s long-term investors, we seek the sustained returns associated with strong governance, rather than the rapid gains that can vanish quickly if they are rooted in corruption, fraud or falsification.”

Wells Fargo is a bank whose practices run contrary to the values articulated by the UC and its sustainable investment framework. In our estimation, the UC should not invest the money of young college students, distinguished faculty and the Board of Regents in Wells Fargo.

Selling $425 million in Wells Fargo holdings would benefit the UC and set a historic precedent for the nation. Our resolution explicitly states that the newly-released funds should be invested in education and companies that are owned or controlled by the formerly incarcerated. Doing so would place the UC at the forefront of a national movement for smart, visionary and ethical investment decisions that aim to benefit society at large.

The newly-released funds should be invested in education and companies that are owned or controlled by the formerly incarcerated.

If the UC does not sell their $425 million of holdings in Wells Fargo Bank, they will have a statewide coalition of relentless, strategic and fearless Black students who are intent on contributing their part to the Black Freedom Struggle. Our patience is quickly reaching its limit and we intend to wage this struggle by any means necessary.

We do not and we will not act alone, as the prison industrial complex targets Black, Brown, poor and migrant lives, and the most marginalized have the least to lose.

The Afrikan Black Coalition (ABC) can be reached at afrikanblackcoalition@gmail.com.