On Wednesday, Dec. 16, the African Union Peace and Security Council (AUPSC) declared its intent to send 5,000 African “peacekeeping” troops to Burundi to protect civilians, whether the Burundian government gives its consent or not.

On Friday, Dec. 18, the United Nations Security Council (UNSC) took note of the African Union Peace and Security Council’s statement but did not approve the deployment against the will of the Burundian government. Instead, the UNSC said that it welcomed the AUPSC’s contingency planning.

According to the U.N. Charter, the UNSC has final say over any proposal to send foreign troops across the borders of a sovereign nation. On Monday, Dec. 21, the Burundian Parliament debated the question in both houses. Both voted not to allow foreign troops to enter their country and stated that they would consider them to be invaders.

How did it come to this?

In May, Burundian military officials mounted a failed coup attempt, then declared war on Burundi and promised that there would be no peace until President Pierre Nkurunziza stepped down. Nkurunziza’s party, the CNDD-FDD, had nominated him for a third term, and the country’s constitutional court had ruled that he had the right to stand for election one more time.

In July, after defeating the coup, Nkurunziza won a third term with over 69 percent of the vote. Some opposition parties boycotted the election and claimed it was unfair, but Agathon Rwasa, the candidate who came in second, took his seat in Burundi’s Parliament, pledged to represent those who had elected him and urged Burundians to move forward.

The failed coup plotters nevertheless undertook an armed insurgency, with military grade weaponry, and assassinated top military and government officials. U.N. officials and Refugees International reported that the Rwandan government is forcibly conscripting Burundian refugees into a new “rebel army” to fight in Burundi, and the evidence of this has been acknowledged by the U.S. State Department and the U.S. Senate and House Foreign Relations Committees.

On Friday, Dec. 12, insurgents attacked three Burundian army bases, but the Burundian army prevailed. Fighting continued throughout the night and as many as 89 Burundians were estimated dead by the next morning. The African Union Peace and Security Council stated that it would deploy 5,000 AU peacekeeping troops to the capital city, Bujumbura, in response.

Earlier this year, Russia and China, two of the five permanent members of the U.N. Security Council who have veto power, blocked a UNSC resolution censuring Nkurunziza for seeking a third term. At the time, Russian U.N. Ambassador Vitaly Churkin said that the UNSC shouldn’t interfere in the governance issues of a sovereign nation.

Russia and China are also widely believed to have kept the UNSC from approving the African Union troop deployment to Burundi against the government’s will.

It has been said that resource competition between Western and Eastern powers is the cause of geopolitical tension now concentrated in Burundi, as it is in Syria. The country has nickel, uranium and cobalt reserves but, perhaps more importantly, a border with the resource rich eastern Democratic Republic of the Congo.

Western officials, Western press and a Burundian point of view

Western officials and Western corporate and state press, have decried President Pierre Nkurunziza’s third term and relentlessly warned that it will lead to a genocide like Rwanda’s. They insist that the Arusha Accord signed in the year 2000 is contemporary Burundi’s primary founding document and that the Accord forbids any president from seeking a third term.

“Pierre Nkurunziza, the president, his introduction to the politics of Burundi came after 1993, when the first elected president was murdered by the military. So before, the issue was ethnic, because the government used to be a Tutsi government, with a full Tutsi military, and you had the Hutu populace. Hutus are 85 percent; Tutsis are 14 percent.

“And so in 1993, through elections, the first time ever, a Hutu was in power, but three months later, the military, the Tutsi military, killed the president, which began the long war of 15 years. And that is when Pierre Nkurunziza was a professor at the University of Burundi. When he got a tip that they were coming to kill him, he went and joined the rebellion fighting against the government of Burundi. …

“And so, when he went into the bush, he joined the rebels, which the movement called the CNDD-FDD, which means the Council of Defense of Democracy, and their role was to restore the democracy that had been robbed from the Burundi people.”

Le Beni Tazira also explained that the CNDD-FDD began as a rebellion against the Tutsi dictatorship, but that it evolved into a multi-ethnic rebellion when it became clear that not only Hutu but also Tutsi were unhappy with the Tutsi elite who had murdered the Hutu president and stolen Burundi’s democracy.

“The party evolved. It evolved at first as being against Tutsis. It was very harsh. But, in the mid-‘90s, they found out that there were many Tutsi who were also not happy – they weren’t taking advantage of the politics of Burundi – and so the movement changed and became a movement against bad leadership.”

In another startling divergence from the Western corporate and state press narrative, Tazira said that the Arusha Accords, signed in the year 2000, which are all about ethnicity, did not end Burundi’s civil war. He said that the Arusha Accords were not even signed by the two primary combatants, the Tutsi army and the CNDD-FDD rebels, whose party is now led by Pierre Nkurunziza. Tazira said, instead, that the 2003 Pretoria Ceasefire Agreement ended the war.

“In 2000, the famous Arusha Accord was signed … Even the Arusha Accords were controversial, because the CNDD-FDD, the strong rebellion, did not sign them.

“And so, in 2000, they signed the last Arusha Accord. They had signed multiple ones before, but this was the last one, and it was signed by seven Hutu parties and 10 Tutsi parties, but those were really small parties. The real fight was between the military and the CNDD-FDD and, to a lesser extent, the FNL, which is Agathon Rwasa.

“And that is why the Pretoria peace agreement is very crucial to the discussion, because even in the Constitution, wherever Arusha is mentioned, next to it is mentioned the Pretoria Ceasefire Agreement that CNDD-FDD signed. They never signed the Arusha Accord.” 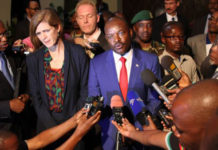 U.S., NATO and the attacks against Libya