News & Views World News & Views In solidarity with the people of Haiti, flood the State Dept. with...
Facebook
Twitter
Email

Tell them: Stop US support for electoral coup and police terror in Haiti!

For the last few months, Haitians have been demonstrating nearly every single day, demanding that their votes be counted and that the fraudulent elections of Aug. 9 and Oct. 25 be annulled. They have been shot down, teargassed, beaten with rubber hoses, and some have been killed. Yet they have come back the next day, determined to have their voices heard. 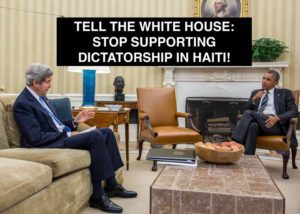 Even though independent observers have documented the widespread fraud that has given the lead position in the presidential elections to the party of Haitian president Michel Martelly, the United States government has endorsed the elections and called for them to proceed to a Dec. 27 run-off.

Fanmi Lavalas, long the most popular political party in Haiti, and its presidential candidate, Dr. Maryse Narcisse, have demanded that a full-scale independent investigation of electoral fraud take place and have initiated a legal challenge to the election both within Haiti and at the Inter-American Commission on Human Rights.

For the last few months, Haitians have been demonstrating nearly every single day, demanding that their votes be counted and that the fraudulent elections of Aug. 9 and Oct. 25 be annulled.

Yet the U.S. State Department continues to support the stolen election, showing that, to them, Haitian votes DO NOT MATTER.

On Dec. 16, the 25th anniversary of Haiti’s first free presidential election that brought President Jean-Bertrand Aristide and the Lavalas movement to power, large-scale demonstrations will take place again throughout Haiti. We are echoing and amplifying their demands with a day of action and solidarity with the people of Haiti.

Please contact us at haitiaction@sonic.net or call 510-848-1656. Tell us the details of any action you are organizing, large or small, so we can publicize it as part of the International Days in Solidarity with Haiti. Let us know your ideas for spreading this movement far and wide.

Haiti on the march: Outrage over stolen election and U.S. complicity

Fraud and violence effectively prevented Haiti’s voters from electing the candidate of their choice. Instead, the ruling party’s handpicked Jovenel Moise, a political neophyte, was made the top vote-getter.

Yet the Haitian people are determined to thwart what they see as an ongoing “electoral coup d’etat” by Haiti’s ruling elite, President Martelly and their U.S., French and Canadian backers – marching in the streets almost daily in their tens of thousands, risking their lives to insist that the fraudulent election be thrown out.

Many are comparing today’s non-stop mass demonstrations to the uprisings that led to the 1986 collapse of the dictator “Baby Doc” Duvalier. The people are turning the defense of their vote into a focus of mass struggle against the hated neo-Duvalierists in the Haitian government and their foreign backers.

Fanmi Lavalas, widely acknowledged as the country’s most popular political party, described the Oct. 25 first round as “a pre-planned fraudulent enterprise that stripped the elections of all credibility … [in] violation of the rights of the Haitian people who alone can choose their leaders through an electoral process,” in its petition to the Inter-American Commission on Human Rights. “These rigged elections of 2015 constitute … an attack on the national sovereignty… and a violation of the political rights of the Haitian people.”

We in the Haiti Action Committee are initiating this call to action to support our courageous sisters and brothers in Haiti. We urge you to join us.

The campaign is aimed initially at the week of Dec. 16, the 25th anniversary of Haiti’s first free election in 1990 which swept a courageous parish priest, Father Jean-Bertrand Aristide, into the presidency with two-thirds of the vote.

We in the Haiti Action Committee are initiating this call to action to support our courageous sisters and brothers in Haiti. We urge you to join us.

In 2015, after being excluded for 11 years since the 2004 coup, Aristide’s Lavalas party was finally able to run candidates, headed by presidential standard-bearer Dr. Maryse Narcisse. People in poor neighborhoods all over Haiti welcomed the grassroots campaign of Dr. Narcisse with great joy and responded angrily to the brazen attempt to steal the elections.

Some key facts about the 2015 stolen election and state repression

Dr. Narcisse, as part of the official Lavalas legal challenge, visited the Vote Tabulation Center, along with election officials, observers, representatives of another contesting smaller party Meksepa and of the ruling PHTK party. They examined 78 randomly selected vote tally sheets (proces verbaux), and all present agreed that every one of the 78 tally sheets was fraudulent, without exception.

The U.S.-backed CEP election commission then abruptly ended the legally-mandated verification process – invalidating those 78 particular tally sheets but failing to check the over 13,000 tally sheets remaining to be verified. With that, the CEP inexplicably accepted the fraudulent election “results” as legitimate.

Deputy A. Rodon Bien-Aime and two other PHTK candidates made a startling revelation about UNOPS, a United Nations agency assigned to transport ballot boxes to the Tabulation Center. They charged that while in U.N. custody, the ballot boxes were switched en route with boxes of pre-filled-out ballots. In addition, a National Palace official was involved in a vehicle accident in which pre-filled-out ballots, marked for the presidential candidate of Martelly’s PHTK party, Jovenel Moise, were spilled on the road.

Fifteen prominent Haitian intellectuals, outraged by “clear involvement of U.N. agencies in the fraud that marred the elections,” wrote an open letter to the U.N. Mission stating, “The whole world is discovering, under pressure from the street … the truth of the biggest electoral fraud operation … for the last 30 years in Haiti.”

Kenneth Merten was appointed U.S. Special Haiti Coordinator in August to deal with the election crisis. He was also on the scene for the 2010 elections.

Under the direction of then-Secretary of State Hillary Clinton, the U.S. favorite Martelly was catapulted from third place into the run-off and ultimately the presidency. Election commission chair Pierre Opont admitted last July that the U.S. “rigged the 2010 election.”

The so-called Core Group – which includes the U.S., France and Canada, whose troops invaded Haiti in the 2004 coup; Brazil, which heads the U.N. military occupation of Haiti; the EU; OAS; and Spain – has also accepted the CEP’s fraudulent election “results” as legitimate. The fix is in. 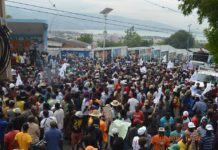