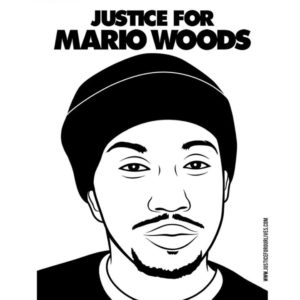 As the community prepares for a showdown at the Police Commission meeting this evening, the following list of demands has been released by Etecia Brown on behalf of #BlackLivesMatter, #BlacknSF and #Last3Percent and these videos have been posted by CRC Media Corps and by Jameel Rasheed Patterson on behalf of Lets Talk Communities.

We demand San Francisco Police Chief Greg Suhr release a public apology for the mistreatment of the mother of Mario Woods by SFPD while she was trying to find out her son’s whereabouts.

We demand the San Francisco Mayor’s Office pay for the funeral of Mario Woods. 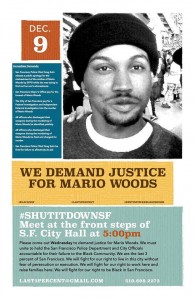 We demand all officers who discharged their weapons during the murdering of Mario Woods be identified publicly.

We demand all officers who discharged their weapons during the murdering of Mario Woods be fired and charged with murder.

We demand San Francisco Police Chief Greg Suhr be fired for failure to effectively do his job.

We demand a stop to all abuse and violence against mentally ill people by law enforcement – first responders should be paramedics or trained negotiators.

We demand that the city redistribute the budget to fund 100 percent of the expansion of Mother Brown’s homeless shelter in the Bayview.

We demand a stop to the building of the new jail and that the $247 million set aside to build this new maximum security jail be redistributed to fund city mental health facilities and community based organizations dedicated to the social welfare of city residents.