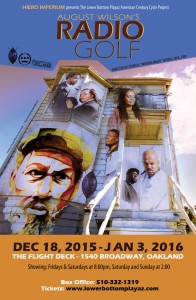 The Playaz close the cycle with the timely production of the only play in the cycle that is told from the lens of developers. Wilson’s Hill District in Pittsburgh, Penn., and Oakland, Calif., in 2015 hold a lot of common ground for many of today’s public conversations about progress, tradition and legacy.

August Wilson is considered one of America’s greatest playwrights, and the work that comprises The American Century Cycle, one of the outstanding achievements of the modern theater, is performed across the globe. But only Oakland’s premiere North American African theater company has performed the entire cycle in chronological order.

Be a part of the celebration and make local art a part of your holiday plans. Be there when theater history is made in Oakland. Visit the website for special deals and events connected to the completion of August Wilson’s Century Cycle in Oakland.

Tickets are on sale on the web at www.lowerbottomplayaz.com . The Flight Deck is easy to reach by BART and bus and is completely accessible. On-street parking is available and the area has a number of lots within walking distance of the theater. Book now and be a part of theater history! Shows are predicted to sell out early.

Ayodele Nzinga, MFA, PhD, is a California artist, who, in the tradition of the Black Arts Continuum, uses performance as a method of inter- and intra-group communication. The founder and director of The Lower Bottom Playaz, she can be reached at wordslanger@gmail.com and www.lowerbottomplayaz.com.