WHAT’S GOING ON??? An unarmed BLACK man shot down on the sidewalk of THIRD Street – MY BEAT – in COLD BLOOD, allegedly 20 plus times, holding only a KNIFE in his hand!!!

NO PEACE UNTIL JUSTICE IS SERVED OVER THE POLICE KILLING OF 26-year-old MARIO WOODS, a HUMAN BEING, MASSACRED BY five SF POLICE officers on DEC 2, in the Bayview, on THIRD STREET, between Fitzgerald and Hollister, across from CORNERSTONE BAPTIST CHURCH, at Third and Paul, where funeral services were held days later.

WHAT’S GOING ON??? An unarmed BLACK man shot down on the sidewalk of THIRD Street – MY BEAT – in COLD BLOOD.

SHOCKING to see a video, aired on TV, taken at the scene, of the killing!!! HORRIBLE – UNTHINKABLE!!! This writer totally upset by what I saw – Woods seen holding a knife – looked like a steak knife. WHY did those officers feel it was necessary to discharge their weapons at the BROTHER???

Woods did not seem to pose a direct threat; that could not have been handled in a different way. The Woods family hired ATTORNEY JOHN BURRIS’ law office to further investigate his death. A lawsuit filed on Dec. 11, 2015, in U.S. District Court Northern District of California.

KEEP UP THE PRESSURE FOR JUSTICE! A MOVEMENT is building – JUSTICE FOR MARIO WOODS COALITION that urges POLICE CHIEF GREG SUHR MUST BE FIRED OR HE HAS TO RESIGN, and the five officers involved must be PROSECUTED!!! The Black community especially MUST KEEP THE PRESSURE ON. What a way to start 2016!

The BAYVIEW COMMUNITY and beyond are OUTRAGED as seen at the S.F. POLICE COMMISSION MEETING Dec. 9! What pain Mario’s mother has to suffer, like so many mothers at the hands of the police! NO JUSTICE – NO PEACE!!!

KEEP UP THE PRESSURE FOR JUSTICE! A MOVEMENT is building – JUSTICE FOR MARIO WOODS COALITION that urges POLICE CHIEF GREG SUHR MUST BE FIRED OR HE HAS TO RESIGN, and the five officers involved must be PROSECUTED!!!

MOVING ON – I forgot about the 100-bed shelter that was to be available in the space immediately next door to MOTHER BROWN’s kitchen, located in the BAYVIEW, at the corner of Jennings and Van Dyke. Thought plans were underway when approved earlier last year, UNTIL I read the project had been DROPPED!!! WHY??? Bayview has the SECOND highest homeless population in the City.

City officials have WITHDRAWN an application for state funding to help construct a 100-bed shelter in the Bayview Hunters Point District. NOT moving forward on the project because it would cost too much! WHAT??? The city has money for everything else!!! Understand City looking for supportive housing! ONLY ONE other shelter in the neighborhood, Providence Baptist Church on McKinnon Avenue, is open overnight for homeless people, but not during the day.

According to Mother Brown’s Director GWENDOLYN WESTBROOK, the United Council of Human Services is looking for another place. Seemed so convenient next to the facilities where meals are served twice a day, a place to nod in a chair overnight. Times are hard, weather cold. Positive changes all over the city, WHY DENY THE HOMELESS problem in Bayview!!!

ARMSTRONG PLACE, on Third between Armstrong and Bancroft , is a comfortable residence for independent seniors, blessed to have two lovely event planners assigned to the residence – MISS TIFFANY GAGE AND MISS VANESSA HARLIN who have livened up the multicultural residents, featuring social activities within and short trips to spots like S.F. ZOO, WALMART and CHEER during the Holiday Season.

The ladies show love and interest in making the environment interesting and fun, and they’ve brought residents of ALL cultures together. They are to be recognized by SUPPORT SERVICES out of Providence Baptist Church, one of the many programs under Providence Foundation of San Francisco. AND not to be overlooked, RODELL RAMOS under the same program works with many of the seniors and has done a marvelous job since Armstrong opened in 2011.

Douglas was an active participant in her community and served as a fierce advocate for social change and justice. She passionately championed causes for the elderly as well as for the youth of the Bayview Hunters Point community through a number of organizations. She leaves her ARMSTRONG family to mourn her passing.

MY condolences to IRENE WILLIAMS DOSS in the loss of her beloved husband, LaRON STEVE DOSS, who passed Oct. 18. HOMEGOING, Duggan’s Funeral Service, San Francisco. REPAST held at the JAZZ ROOM on Third that saw many come by to give her comfort, including club regulars DON JUAN, MR.ROY, FREDDIE, ICONIC mixologist, MS. CLARA JACKSON, retired, CECELIA KENNEDY, to name a few. AND R.I.P. to a fine gentleman, MR. HERMAN PHILLIPS, who passed in mid-December.

LOVE, PEACE AND HAPPINESS TO ALL OF YOU OUT THERE, AS WE MEET THE CHALLENGES AT HOME AND BEYOND … STAY STRONG, FOR THE WORLD WE LIVE IN HAS CHANGED! 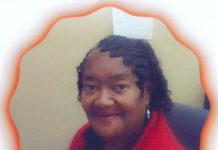