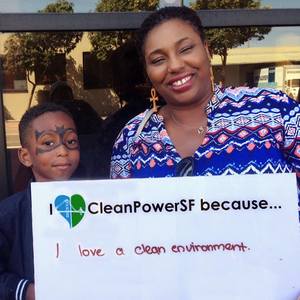 Shortly after 4 p.m. on Tuesday, Jan. 12, 2016, following the Commission’s unanimous approval, SFPUC General Manager Harlan Kelly signed the first power purchase contract to officially launch the program. CleanPowerSF will have a cleaner energy mix and lower rates than those of Pacific Gas & Electric (PG&E) and begins service to customers on May 1, 2016.

The program will provide the option for both commercial and residential customers to begin receiving 35 percent clean renewable electricity at a slightly lower rate than PG&E, or instead opt up to 100 percent clean energy for a slightly higher price. PG&E’s energy mix is currently around 27 percent renewable. SFPUC Assistant General Manager for Power Barbara Hale announced at Tuesday’s meeting that both commercial and residential customers can now pre-enroll to join CleanPowerSF at http://cleanpowersf.org.

Outstanding issues with program implementation include the speed at which the program will be expanded citywide to provide savings to all residents and businesses, as well as the timeline and robustness of plans for comprehensive citywide and regional installations of local renewables. Advocates noted that this buildout must be engaged much sooner than currently planned in order to provide greater savings to residents and secure the program’s workforce development objectives of creating thousands of new jobs in the near term.

Rebecca Evans, chair of Sierra Club’s San Francisco Bay Chapter, said, “This action by the SFPUC to sell greener energy at lower rates is truly groundbreaking in a major city the size of San Francisco. Sierra Club’s members, and the planet, thank the SFPUC for launching this program and boldly leading the rest of the nation into a clean energy future. We call on other cities to quickly follow San Francisco’s lead.”

“This crucial step forward for San Francisco comes at a key moment in the history of our planet,” said Jed Holtzman, co-coordinator of 350 San Francisco. “The international community agrees we need to move to 100 percent clean energy as soon as possible. If fully implemented, CleanPowerSF can take us there, provide a model for cities all around the world to follow, and play an outsized role in making our global renewable energy future a reality.”

Bruce Wolfe of the Haight Ashbury Neighborhood Council said, “The strong inclusion of commercial customers from the start in CleanPowerSF is so vital. San Francisco’s small businesses have been crying out for relief from PG&E’s high priced polluting electricity for decades. Now they are finally getting the choice of a cleaner and lower priced alternative.”

“The gas disaster in Southern California sounds the death knell of fossil fuel energy,” said Our City SF Campaign Coordinator Eric Brooks. “San Francisco just made a decisive move toward ending dependence on such disastrous fossil fuels. Now it’s time to hire thousands of local union workers to build an infrastructure to deliver 50 percent of the city’s electricity from clean local sources by 2025 – and 100 percent by 2035.”

Eric Brooks can be reached at info@ourcitysf.org.

PG&E vs. the people and the planet: John Avalos to the rescue

San Francisco solar back on track?