On a Friday evening in San Francisco, when the average 20 something is either attending an after-work happy hour or engaged in their startup, many young people are gathered outside of the Saint John Coltrane African Orthodox Church for the start of the “Reclaim MLK” weekend, a 96-hour action dedicated to non-violent protest against police terrorism and gentrification. Conversations range from discussing the prison industrial complex, activist work with allies, and Thursday night screening of “Lowrider Lawyers: Putting the City on Trial,” a film project that exposes the corrupt investigation into the murder of Alex Nieto.

Blacks, Latinos, Asians and a few whites all congregate in small groups and plan before entering the church. Even before tonight’s events start, you can feel the energy in the air. Simply put: The youth are the engine of today’s movement.

Saint John Coltrane African Orthodox Church is a small but inviting space. Pictures of Black historic figures adorn the walls. A drum setup and a few instruments sit on the ground waiting to be played. Coltrane, the church’s namesake, is softly playing and older African men and women teach younger boys and girls about past struggles. This is Black self-respect personified.

You can feel the energy in the air. Simply put: The youth are the engine of today’s movement.

The meeting begins with Adam Jordan, a member of the Black Lives Matter Bay Area chapter. Jordan, a charismatic speaker with a rapid-fire delivery, starts by talking about the disastrous effects of gentrification in San Francisco.

Stories of families being evicted, households displaced and communities of color being uprooted fill the room. It’s telling that Jordan talks about gentrification in The Fillmore, a historically African American community that has been one of the hardest hit areas of racial displacement.

To close out his speech, Jordan reads the demands of the BLM Bay Area, which include the resignations of Oakland Mayor Libby Schaaf and SFPD Chief Greg Suhr. Jordan also goes after some of the old guard of Black SF politics for working against justice for the murdered Black and Brown men.

Jordan then switches the discussion to the subject that has galvanized many of the activists here – the state sanctioned murders of unarmed Black and Brown men by the San Francisco Police Department.

When Archbishop Franzo King, head of the church, speaks, all eyes are fixated on his slim frame and ears are tuned to his rhythmic speech. King walks, talks and breathes revolution. An amazing communicator, King’s message is simple to take and easy to digest. No filler, no bullshit, all real. King speaks of the historic similarities between Black and Brown communities as well as homeownership in the community.

The feeling of Black and Brown brotherhood is real and immediate. “The fierce urgency of now,” a quote by Dr. King, seems appropriate. Etecia Brown of The Last Three Percent, an organization composed of young Black community leaders who are fighting the racial displacement of African Americans, declares: “We cannot ask our slavemasters to set us free. We have to do it ourselves!”

Brown then reminds the group of why Black and Brown people must unite: “The only difference between Black and Brown is that our slavemasters spoke English and theirs spoke Spanish.” Oscar Salinas reinforced the union by reading a telegram from Martin Luther King Jr. to Cesar Chavez. Unity is yelled out when Salinas finishes reading. It feels good.

As we spill out of the Saint John Coltrane African Orthodox Church, we gather and begin marching down Fillmore. We chant, “How do you spell murder? SFPD!” and “Rise Up, Rise Up.” Signs with the phrases “Midtown is the #last3percent,” “Black Homes Matter” and “Evict Ed Lee” (shocker) are held up. The energy rises after every city block is marched, and the group grows after each protest song is sung.

The feeling of Black and Brown brotherhood is real and immediate. “The fierce urgency of now,” a quote by Dr. King, seems appropriate.

Melissa Crosby, activist and poet, speaks of the importance of the Black and Brown communities coming together to fight oppression: “Part of the reason why we are still so oppressed is because people have internalized trans-generational messaging perpetuated by the misguided values so deeply engrained in our everyday ways of being and surviving in this country in particular.

“For a long time we struggled to see our worth beyond the value that a capitalist economy tells us to attach to ourselves as it relates to what we are able to produce and consume. This struggle is as old as the theft of indigenous lands and subsequent deaths of millions of indigenous and African people as this country came into a kind of economic power.”

Crosby continued by saying: “We are redefining our values and our self-worth and in doing so create more space to come into connection, to care for and learn from each other. When we come together, we have a glimpse into our collective power, and we are starting to see that very clearly now. We have had moments in the past where Black and Brown people of all shades have come together, but this is truly a monumental moment.”

Al Osorio, local community organizer, echoed the sentiments of collective power and moving past negatively held beliefs between the two groups: “Things are worse than ever before. The murders of our people are on the uptick. There are more of us dying, and we are left to fight over the crumbs.

“The police, the media and the system manipulate us into hating each other with prison gangs … selective enforcement. They use immigration to scare Black people into thinking their jobs will be gone, and many of us buy into the American dream and distance ourselves from Black people. The time is now. We have to confront it. We are at a critical point.”

The procession moves from Geary and Fillmore, reaching its apex at Webster and Geary. Activists block traffic from all four sides with large signs that read, “We are the last 3 percent of Black SF” and “Black Lives Matter.” An extremely large banner is hung over the Geary bridge, proclaiming, “No consequence, no confidence #stoppoliceimpunity.”

Many drivers honk their horns out of frustration that traffic has stopped, but many other people honk in solidarity with the protest. I catch up with Edwin Lindo, lawyer and candidate for San Francisco’s District 9 Supervisor seat, to get his take on how this show of collective power will be beneficial.

The procession moves from Geary and Fillmore, reaching its apex at Webster and Geary. Activists block traffic from all four sides with large signs that read, “We are the last 3 percent of Black SF” and “Black Lives Matter.”

“We needed this 10 years ago,” he says. “We had two Black and Brown men’s lives sacrificed so that we can unify. Our communities have been historically divided, so we couldn’t come together. Power comes from organizing, and when two communities come together to organize, then the power becomes two-fold. Now with the Black and Brown communities coming together in SF, the powers that be will realize that they cannot divide us.”

The longer the action progresses – activists blocking the streets and stopping traffic – the more tempers rise from those in cars and buses. As I hold up a yellow banner reading, “Homes for people, not profit,” in front of a 38 Geary bus, an older white male jumps off and begins berating us, saying, “This is inconveniencing me. I am just trying to get home.”

I immediately fire back by saying, “So you care more about being late getting home than young Black men getting killed by the police? I’m sorry if this protest for our lives is inconveniencing you, sir, but I care more about my life than you getting home to watch TV.” The man responds angrily, “I used to support your cause.”

I reply with a response that cannot be written in this piece, as the man turns to walk home. This is not surprising, as white apathy towards Black and Brown causes is unfortunately the norm in America.

“Power comes from organizing, and when two communities come together to organize, then the power becomes two-fold. Now with the Black and Brown communities coming together in SF, the powers that be will realize that they cannot divide us.”

As the action moves back to the Saint John Coltrane African Orthodox Church, I am told that one of the men waiting in his car behind a “Last 3percent” banner wants to voice his opinion. Nick, an older Black man, offers his support of protest.

“What I see here at the intersection of Geary and Webster is a non-violent demonstration. They are trying to get attention. What frustrates me is the media not covering it. I have young people blocking my way, but I understand why they are here. All you can do is wait and be supportive.”

When I ask him does he think we can get justice in 2016, Nick pauses for a second and says: “I have to believe we can. I refuse to adopt a defeatist attitude. If our predecessors in the ‘50s and ‘60s did it with fewer resources, then I believe we can.”

After I finish talking with Nick, I look out to the crowd and see Black and Brown faces chanting in unison, showing love and expressing solidarity. “We cannot stop; we have to keep going,” I say to myself. As was mentioned earlier, the youth are the engine in this movement; as the African proverb suggests, “Each one teach one.” I smile and think about what Nick said: “Maybe we can get justice. Maybe we can get free.”

LeRon L. Barton, a writer from Kansas City, Missouri, who currently resides in San Francisco, has been writing poetry, screenplays and short stories since he was way young. LeRon’s essays have appeared in Salon, The Good Men Project, Those People, Buzzfeed, Gorilla Convict and Elephant Journal. He is the author of “Straight Dope: A 360 degree look into American drug culture,” released in 2013, and his new book, “All You Need Is Love” is available on Amazon.com. You can reach him at www.mainlinepub.com , twitter.com/MainlineLeRon, https://www.facebook.com/ninjagaiden78 and info@mainlinepub.com. 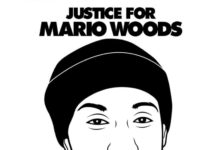