“This conference that we are picketing … is an obscene reflection of the reality of this country today, that the most important thing is money and profit and not human needs!” – Carole Seligman, speaking at the demonstration

It was in their fancy tailored suits and with suspicious eyes that big pharma CEOs and investors got interrupted by protestors and speeches such as the above as they came and went from the too-big-to-fail JP Morgan-sponsored conference on “health care” (read: profit care) at the elite Westin St. Francis hotel on Union Square in San Francisco on Monday, the 11th of January, 2016.

Called out by the OASIS Clinic, a not-for-profit in Oakland that specializes in treating patients with Hepatitis-C, the demonstration was organized in collaboration with the Labor Action Committee to Free Mumia Abu-Jamal (LAC) and supported by numerous other groups. Some 70 protestors, including OASIS staff, patients and medical professionals, marched outside the hotel, as the pharmaceutical investors came and went, to demand proper treatment for the 3 million victims of Hep-C in the U.S., including 700,000 prisoners, and to give the CEOs a warning: We are watching! Profiteering must stop!

Gilead charges 100 times its cost for the Hep-C cure

The big pharma company Gilead Sciences, based in Foster City, Calif., was a chief target of this action. Gilead is the owner and manufacturer – but not the developer; that was a company that Gilead bought – of the new drug, Harvoni, which has a 95 percent cure rate for Hep-C in a 12-or-more-week treatment of one pill per day.

This is a vast improvement over the previous treatments for Hep-C, but Gilead charges the outrageous price of $1,000 per pill for the drug, which brings the cost to $84,000-$100,000 for a full curative treatment, or more than twice what the developing company’s suggested price was. Gilead charges about 100 times the cost of production of the pill!

The reaction inside the conference and the anger outside

We thought we had induced some indigestion and sure enough we had! We were told by one journalist covering the conference that the demonstration had really shaken them up. Reaction inside the conference was immediate.

Of course, we protestors and patients weren’t allowed in to hear this, but according to the report, “Drug makers dismiss outrage over high prices as ‘abomination,’” from Stat News on Jan. 12, because of our demonstration, “(It) wasn’t surprising that during a panel discussion here Monday, a Gilead executive was asked how he lives with himself.

“Gregg Alton, the [Gilead Sciences] executive vice president for corporate and medical affairs, joked that he goes running. Then his tone turned serious as he talked about research, innovation and the value of life-saving new drugs. ‘I sleep quite well,’ he concluded.”

Anger at drug companies is called an ‘abomination’!

Even more outrageous was the following from a conference participant: “Public anger at drug companies is ‘an abomination’”! The speaker was Ron Cohen, chairman of the big industry group BIO, allegedly “the world’s largest biotechnology trade association,” according to https://www.bio.org. All the talk about pharma profiteering is “a perversion of reality,” according to Cohen.

Protest is an abomination?! Anger over big pharma profiteering is a perversion of reality?! The truth is millions of Hep-C sufferers are being denied the curative treatment because they cannot afford it, or their health plans refuse to cover it due to its cost, or because they are prisoners – Mumia Abu-Jamal among them – who are denied it because prison administrations refuse to supply it until they are deathly sick! This is an abomination! Health care for all is a right, but not to these greed-driven big corporate executives!

Many drug makers besides Gilead – Pfizer, Ely Lilly, Amgen, Allergan and Vanda Pharmaceuticals, among many others, have raised prices recently, according to the Wall Street Journal and the New York Times. “And a slew of new drugs have hit the market with eye-popping price tags: cancer drugs at more than $11,000 a month, cholesterol drugs at more than $14,000 a year,” according to the Stat News piece.

“Then there’s Martin Shkreli, the pharma executive who bought up a decades-old drug and hiked the price 5,000 percent, turning himself into a target of nationwide protests before he was arrested last month on securities fraud charges.”

All this comes in addition to the already over-the-top high drug prices in the profit-driven U.S. “health” system, which is more costly than in virtually any other country! As protest coordinator Jack Heyman pointed out: “Shrekli should have been arrested for profiteering. But in capitalist America, profiteering is not illegal.”

Where is the perversion if not in this system, in which profit is god, and the rest of us – the working masses – are sacrificed on the altar of corporate greed?!

Mumia’s radio commentary, “Medications for the money, not patients,” recorded Jan. 6, 2016, deals with the outrageous profiteering of Gilead Sciences in its pricing for the Hepatitis-C cure. The commentary was to have been played at the rally, but technical difficulties prevented it. You can listen to it here:

Our demonstration was fired up

Speakers, besides Carole Seligman, included Dr. Dianne Sylvestre, executive director, and Orlando Chavez and Ana Turetsky of the OASIS Clinic; Dick Becker of the ANSWER Coalition, which provided the sound system; Gerald Sanders of the Oscar Grant Committee; Marsha Feinland of the Peace and Freedom Party; and Robin Roth of the Hep-C Task Force of SF. The Single Payer Now group, along with numerous others, also supported this demonstration with their signs and banners.

Former political prisoner Angela Davis, who was on a speaking tour, sent the following message to the demonstration:

“As we know, Mumia has Hepatits C – along with 10,000 other prisoners in Pennsylvania and approximately 500,000 all over the U.S. They are not receiving treatment because the pharmaceutical companies producing drugs that are capable of curing Hep C value profit over human health.

No execution by medical mistreatment!

Mumia Abu-Jamal, the world’s best-known political prisoner, like 10,000 prisoners in Pennsylvania, where Mumia is incarcerated for a crime he did not commit, and at least 700,000 other U.S. prisoners, suffers from a debilitating Hepatitis-C infection which is not being properly treated by prison administrators.

Hugo “Yogi Bear” Pinell, one of the longest serving and most brutally treated political prisoners in the U.S., was set up and murdered in 2015. This is what they are trying to do to Mumia now, by medical mistreatment, and if that fails, by other means! Mumia must be freed from prison!

The LAC linked this struggle with the potentially precedent-setting court case of Mumia versus the Pennsylvania Department of Corrections, Abu-Jamal v. Kerestes, which seeks injunctive relief for immediate treatment with the new Harvoni curative medication for Hepatitis-C. Currently, Mumia is being treated with a bogus heat-lamp therapy for his painful body-wide skin inflammation, while being denied treatment for the Hepatitis, which is the cause of this and all his symptoms.

Mumia is the first one to point out that prisoners throughout the U.S. are, like him, not being properly treated for this debilitating and always fatal disease. A victory for Mumia in this suit could extend a precedent throughout the prison system. The lawyers for Mumia in this case are supported through a fund organized by Prison Radio, the organization which publishes Mumia’s regular commentaries. We urge you to help! Go to www.prisonradio.org for more information and to donate.

Mumia must be free!

Like so many other prisoners, Mumia needs to receive the life-saving cure for Hep-C. And, as an innocent political prisoner, framed for a crime he did not commit, he must be free. But, like Leonard Peltier and other political prisoners who are targeted by the state at all its levels, from local police through state and national politicians and the Justice Department itself, Mumia needs a mass mobilization and workers’ struggle to free him from this unjust incarceration.

In 1995, masses mobilized to stop the planned execution of Mumia and, in 1999, Oakland teachers and West Coast longshore workers set an example by conducting labor actions to free Mumia, which included the shutting down of all West Coast ports!

On Jan. 21, an email was sent to Pennsylvania Gov. Wolf by the largest union in South Africa, NUMSA, the militant metalworkers union. The Numsa letter stated, “The refusal to health-care reminds us of the conditions we were put in under Apartheid prisons where sick detainees were allowed to die in very deplorable lonely conditions in solitary as part of the punishment for their role in the struggle.”

They demanded Mumia be given the Hepatitis C med Harvoni free and they added “his immediate release from prison, as we believe his incarceration was for his political beliefs.”

With Mumia’s life at stake, labor and the community need to build a mass international mobilization to Free Mumia Abu-Jamal!

Oakland-based writer Chris Kinder, a member of the Labor Action Committee to Free Mumia Abu-Jamal, can be reached at cskinder44@gmail.com. This article first appeared in Counterpunch. 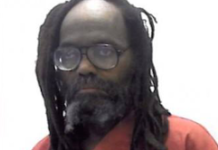