On Jan. 29, Latina wordsmith Raw G, with a full band, will be rockin’ the Bay Area, San Jose and Los Angeles with Mexican rap legend Pato Machete and Mexican Cumbia legend Celso Pina. With Cali being the melting pot that it is, this show should be an interesting mix of music and culture. Check out Raw G in company at the shows, as well as with these words. 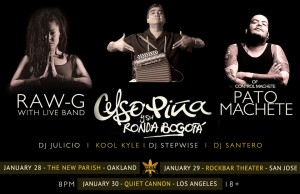 Raw G: I wanted a name that represents my work and who I am as a person. I believe it was around 2003 when Steelo, who does a lot of work with me, came up and said. “Hey, how about Raw?” Back then people used to call me G for Gina, so that’s when we finally said. “There: RAW-G.”

M.O.I. JR: How would you define your early sound?

Raw G: I would say my early sound was a little melancholic and hard in a way. I did a lot of storytelling and liked to play different characters within a song. It took me a while to be able to deliver a soft sound. I remember recording a love song and refused to put it out because I sounded like I was angry.

I feel like I’m constantly learning new ways of expressing myself and I enjoy the process of experimenting with the way I deliver my sound.

M.O.I. JR: What were you doing to further your career in the early days?

Raw G: I feel that I have never stopped writing and finding ways to improve. Not only musically but all areas in my life. I really have learned so much in the process.

You can’t really sit down and wait for anyone to do things for you, so I would jump and knock on doors, analyze situations and simply push hard and go for what I want. Life is a learning process, and the more I opened up to learn, I found out that no one can take knowledge away from you.

M.O.I. JR: Can you tell us a little bit about your recently released debut album?

Raw G: “Esperanza,” which is Spanish for hope, is my first studio project. This project contains collaborations with Gift of Gab (Blackalicious), DJ Shadow, Lila Rose and other local artists. In this record I have a little bit of everything, from political and social justice and corruption to hope and love.

This is more of a preview of what I have coming up on my second project, I’m currently working on. I’m thankful for the support “Esperanza” has been getting, and I’m excited to be sharing more new music soon.

M.O.I. JR: You have two shows back to back with Celso Pina and Pato Mahete? Who are they in the Spanish speaking Hip Hop world?

Raw G: I have three shows coming up which I’m excited about: Jan. 28 at The New Parish in Oakland, Jan. 29 at the Rockbar Theater in San Jose and Jan. 20 at Quiet Cannon in LA.

Celso Pina is a Cumbia pioneer out of Mexico who has been around since the ‘80s. He formed a group called Celso Pina y Su Bogota, which has been nominated for Grammies several times.

Pato Machete was a member of Control Machete, a legendary Hip Hop group coming out of Mexico in the ‘90s. They opened doors and inspired many of us. My music partner Steelo had the opportunity of opening up for them in Guadalajara Mexico back in 1995.

This will be the first time Pato Machete performs in the Bay. He now has a project with Celso Pina as part of the same record label.

M.O.I. JR: How could people purchase tickets and stay online with you?

Raw G: You can purchase tickets at http://www.jaffeevents.com. Stay connected with me by visiting my website, www.raw-g.com, or follow me on Facebook, https://m.facebook.com/RawGmusic. Peace and love.