by Sundiata Acoli and Earl Edelin

Most parties now agree that mass incarceration is NOT the solution to crime in America. The reason being is that its prison population size is NOT determined by the number of CRIMES committed. 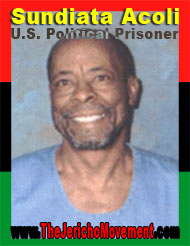 For at least five straight years, both violent and nonviolent crime rates have been declining and serious crime rates were as low in 2011 as they were in 1964, yet the nation’s prison population remained functionally the same size and the U.S. continued its shameful position as the country with the most prisoners in the world.

So if the crime rate is not the dominant factor, what is? A look at the U.S. prison population shows that poor people make up its largest economic group and Blacks are its largest racial group, followed closely by Latino(a)s and other people of color. Whites are a racial minority in the prisons.

These proportions in prison are a shocking contrast to their percentages in outside society, where workers are the largest class and Whites are the largest racial group, followed by Latino(a)s, then Blacks and other racial and ethnic groups of color. It strongly suggests – as any quick review of racial and class relations between the government and people of color and the poor will show – that UNJUST racial and class policies are the dominant driving forces behind mass incarceration in the U.S. today.

The financial cost of mass incarceration has put critical strains on federal, state and city budgets nationwide, plus the moral crisis brought on by continued unjust racial and class policies toward people of color and the poor has created a social crisis in America. This has forced the federal government to initiate projects that address mass incarceration in federal prisons. Similar processes are being put in place to free state prisoners.

Since Blacks in particular and other people of color and the poor in general suffer disproportionate harm from encounters with the American justice system, many look upon these initiatives as President Obama’s attempt to “finally do something for the Black masses”: the average Black person in the street, the ones who have borne and are bearing still the brunt of the harm from the American justice system.

Civil rights lawyer Alex Karakatsanis said in an Aug. 18, 2015, New York Times op-ed: “There are many people … in America’s federal prisons … whose sentences are now obviously illegal … (but) the Justice Department said that it did not want a rule that allowed other prisoners … to retroactively challenge their now illegal sentences. If the ‘floodgates’ were opened, too many others – mostly poor, mostly Black – would have to be released. The Obama administration’s fear of the political ramifications of thousands of poor minority prisoners being released at once around the country, what Justice William J. Brennan Jr. once called ‘a fear of too much justice,’ is the real justification.”

The sun is setting on the Obama administration, which seemingly has patterned its legacy on the Lincoln presidency that “freed the slaves.” And we believe the long arc of history will ultimately judge Obama, not by Bin Laden, GLBT, women, immigrants, business bailouts nor healthcare, but by whether he “freed the captives” or not.

There is more than ample justification for Obama, the first Black president, to do so, despite Bill Clinton’s claim to that title. Ironically this is the same Bill Clinton who, admittedly, during his tenure put more Black men in prison and kicked more Black women off welfare than any other president in U.S. history.

The projects provided to date are far from adequate for a timely resolution of the mass incarceration problem unless they are altered to take in and favorably process many more prisoners than their present capacity. And to make matters worse, the federal pardon attorney, Deborah Leff, recently sent her letter of resignation, effective Jan. 31, 2016, to the president.

She was unable to do her job due to lack of resources and blockage by the deputy attorney general who has authority to review the pardon attorney’s clemency recommendations, and federal prosecutors generally have little interest in revisiting or undoing their department’s criminal convictions.

Obama has announced new standards and encouraged tens of thousands of federal prisoners to request reductions of their inordinately long drug sentences. He can end the blockage by running the pardons office out of the White House or by appointing an independent commission, as several states have done to improve or streamline the clemency process.

Right now, the most significant criminal justice reform package, which would, among other changes, reduce unjustly long drug sentences, is teetering on the edge of collapse in Congress. Whether it will survive or not is anybody’s guess.

But there is no question that President Obama has the power to revitalize clemency and deliver more justice to more people, if only he would do it. (See “Mr. Obama’s Pardon Problem,” an op-ed in the Jan. 27, 2016, New York Times.)

So this is mostly to urge federal prisoners to file for relief under the programs offered and to mobilize y(our) families, friends, supporters and others who believe in freedom and justice to write, wire, call or email President Obama and urge him to run the pardon office directly out of the White House or by an independent commission.

The various decarceration projects, programs and filing procedures are:

The best way to begin this process in the Bureau of Prisons is to ask your prison case manager for one or more Clemency and Commutation forms. You can also request these forms from the United States Pardon Attorney, 1425 New York Ave. NW, Washington DC 20530. I should add that when you apply for a pardon, you are required to have been incarcerated for five years.

President Obama has created an Affordable Health Care Program that provides free health care for people being released from prison. There is a limit as to how long you can receive this health care.

There are several retroactive amendments that reduce your sentence for drug offenses: One is a Motion to Modify the Terms of Imprisonment. You file this motion pursuant to 18 U.S.C. Sec. 3582(c)(2). However, I suggest before you file anything, you simply write a letter to the Clerk of the Court of your area and also send a letter to the lawyer who handled your case. In the letter to the court, start by saying: “If I may, please let this letter serve as my motion to determine if I qualify for a modification under the 782 Amendment – or 750 Amendment – or any other relief that may be available to me. I also request that the court appoint me counsel, as I am indigent and want to avoid the risk of constitutional error.” In your letter to your lawyer, just ask him if he can get appointed to file a Sec. 3582(c)(2) motion for you. They will respond – good or bad.

For your information – The Corrections Corporation of America (CCA) and the GEO Group Inc. make billions and billions of dollars operating prisons. They have given over $25 million to lobbyists to lobby against prison reform and against any program designed to release prisoners from prison.

These groups have donated over $10 million to some of the presidential candidates to reject prison reform programs. The bottom line is, the only way they stay in business is to keep us prisoners locked up.

HOPE IS THE NECESSITY OF MANKIND – This sentencing reform bill gives us and our families HOPE that we are released from prison … HOPE that we are able to live out the remainder of our lives with our loved ones. Keep this HOPE alive! Do something every day towards getting out of prison.

Editor’s note: CourthouseNews.com reported some bad news on Tuesday, Feb. 23: “Sundiata Acoli was denied parole Tuesday by the New Jersey Supreme Court, which found that he never went before the full parole board as required by law.

“The state high court’s decision reversed a previous ruling by the New Jersey Superior Court Appellate Division, which had granted parole to Acoli, and urged ‘patience, exercising judicial restraint, and allowing the administrative process to reach its conclusion.’