Hypnotic Brass Ensemble is one of the most riveting and exciting instrument-playing musical formations specializing in Jazz wit’ a splash of Hip Hop that has come out of the United States since Herbie Hancock’s song “Rockit” and Bradford Marsalis’ “Buckshot LeFonque.” I know that some Hip Hop connoisseurs are wondering why I didn’t say the Roots, but the truth is that they don’t specialize in Jazz, although they may have been groomed off of it.

To add to the mystique of the Hypnotic Brass Ensemble, seven of the members are blood brothers from the polygamous household of jazz legend Phil Cohran in Chicago, who was in Sun Ra’s band as well as a mentor to Chaka Khan and Earth, Wind and Fire. After touring internationally for many years and playing as the backup band for Prince and Yasiin Bey aka Mos Def on occasion, Hypnotic Brass Ensemble is planning to expand their fan base within the U.S. They will be coming to SF Jazz in San Francisco on March 19.

I talked with trumpet player Gabriel “Huda” Hubert about touring extensively overseas, one of his brothers quitting the band, growing up in a polygamous household, the legalization of marijuana, their upcoming new album, “The Bad Boys of Jazz,” and more.

M.O.I. JR: Be it that y’all’s father is a jazz legend who influenced people like the great Chaka Khan and the legendary Earth, Wind and Fire, and that you all play horns, and that you were born during the Hip Hop generation, how would you describe the music of the Hypnotic Brass Ensemble?

Huda: Our music is described as “Now Music,” a term coined by our father as music that is “fresh and eternal.” It encompasses all the elements people look for when they listen to music.

M.O.I. JR: When we talked earlier, you were telling me that you and HBE have toured extensively overseas but not nationally? Why?

Huda: The reason why the band has toured extensively overseas and not inside the U.S. is primarily because of not having U.S. representation. Secondly, because our music was exposed to an international audience first.

M.O.I. JR: What is the difference between the overseas markets in Africa, Asia, Europe and Australia and the one in the United States? What markets do you personally like the best?

Huda: In my opinion, the difference between the international markets, outside of the U.S. and here, is simply taste. International audiences like lyrics with their music. But it’s not a deal breaker when considering great music or a fantastic artist. And here in the U.S., we drive on what an artist is speaking verbally about, along with what the music sounds like.

M.O.I. JR: Recently your blood brother who played Tuba left the band. What can you tell us about the situation and how will that affect the sound of the band?

Huda: My brother simply chose to be home with his children daily, as opposed to periodically, due to heavy touring schedules. It changes the sound and band in a couple different ways. One, the organic sound minus electrical instruments being included is no longer there. And it isn’t eight brothers agreeing on the completion of a song.

But it has allowed HBE to transform and grow in terms of being more creative with songwriting. We’ve added a bass guitar, electric guitar and, on some occasions, more percussion, keys and vocals. And this gives our sound growth and depth. It also prepares us more for this U.S. market the band is stepping into.

M.O.I. JR: How does growing up in a polygamous household with three mothers and 20-plus siblings affect all of you as musicians? Did you all grow musically together? What lessons were learned that couldn’t be taught in families that were just nuclear?

Huda: Growing up in a polygamous household may seem abnormal to most. But the only difference, in my opinion, is having more than two parents to help guide and cultivate the children’s development. We were given extra love and affection, which produced some incredible members of society.

Yes, our parents taught each and every child to play an instrument. It is the family business. I think one of main lessons that stand out to me is strength in numbers.

M.O.I. JR: What was it like to one day be playing for money on a New York street corner, then next y’all was backing up Prince and Mos Def, then next you were becoming internationally famous in your own right?

Huda: Our transition from street performing to collaborator to coming into our own is how dreams come to fruition. We watched it all transpire before our eyes and soaked it up as these days came and went – and we remain as humble as each giant artist was as we worked together. The thoughts and emotions are indescribable, but they are definitely considered blessings.

M.O.I. JR: Now that the Peter Tosh inspired “Legalize It” marijuana movement is crossing the nation and the world, how do you feel about this restriction beginning to be lifted?

Huda: My opinion on legalizing weed comes from a person who hasn’t smoked in a while. I think the progress is monumental for weed smokers and bud heads. Whenever or if ever I smoke again, I’ll definitely be grateful that it is finally recognized for what it truly is: herbs.

M.O.I. JR: Can you tell us about HBE’s 2016 upcoming release, “The Bad Boys of Jazz”? What made HBE add lyrics to the two singles?

Huda: In 2016, we want the world to prepare for our upcoming release of “Bad Boys of Jazz.” And it is all new music with the refined sound, using vocals, bass, guitar, percussion and keys. Keeping with the traditional HBE style, but expanding our creativity to fit our new sound.

We’re paying homage to many decades of music from big bands, spreading across all genres. We added lyrics to our music because of growth and not stifling our creativity. Lyrics have always been a part of what music represents. Now they emphasize proper timing. 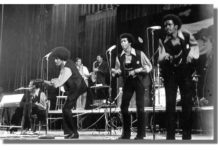 It’s about time for The Lumpen

To honor Whitney, how about we end addictions?

‘Back to the Future’ mixtape: an interview wit’ R&B singer Dasha Chadwick