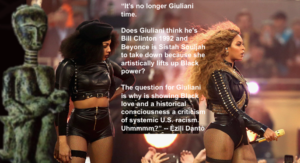 By ourselves, we disenfranchised Haitians took down the fake elections and U.S. puppet president, Michel Martelly. He left on Superbowl 50, Feb. 7 – the day Beyoncé set off a politically charged “Formation,” unapologetically Black.

America’s most powerful artist dressed her dancers in Afros and Black Panther leather outfits and got in (Malcolm) X formation, Black fists raised up. She straight-up channeled Èzili Dantò – “Petwo womb blood in trouble waters” – with centuries of warrior-mother battles behind her. Banm sèt kout kouto – bring it! she said.

She twirls off all haters. Used her huge megaphone to ask what happened to Black people after Katrina in New Orleans? Bluntly challenging her audience to rise to the occasion, uncaring if they don’t get it. She broke the internet, they say.

They’re still dissecting the in_formation laden video where Queen Beyoncé surprisingly goes back to source. Lifts Southern trauma. The historical suffering Black body, its self-expressions. Beyoncé pays tribute to the warrior Ancestors and the struggle for Black lives to matter.

By ourselves, we disenfranchised Haitians took down the fake elections and U.S. puppet president, Michel Martelly. He left on Superbowl 50, Feb. 7 – the day Beyoncé set off a politically charged “Formation,” unapologetically Black.

The classics are musically better listening music. This is not a ballad or poetry. “Formation” engages other senses. The mind, imagination, our sight, our sense of rhythm and movement, visceral womanhood, sexual senses, our spiritual connection to the Ancestors, revolution, the cosmos, a video visual America.

It’s raunchy, sonically techno and socially radical. If Barack Obama could get a third term and needed a headliner for his inauguration ball, this Beyoncé may be too politically incorrect to get invited to sing “At Last” for him. It’s America and only men with money like Donald Trump get to say whatever they wish at any venue.

The popstar was still the popstar though. Still will make you cringe with the Bill Gates idol thing. She probably doesn’t know the pharmaceutical, missionary guinea-pig eugenicist thing he does abroad with the Clinton ilks.

The parts elevating conspicuous consumption, Givenchy lace materialism and money as the epitome of success, does make you shudder. It is what it is. Enter if and where you can.

Fifty years later, on the anniversary of the formation of the Black Panthers, what we’re going to do?

The point is, on leap year Feb. 7, 2016, Beyoncé was also brilliantly and loudly Black.

Haiti, as usual was ahead of the game.

We canceled the carnival king on carnival day. Then dropped to customary Haiti formation to do the New Orleans protest, a rara uprooted Kundalini twerking from Haiti via Afrika.

There’s an image of Beyoncé in New Orleans on top of a cop car in the flood waters. Her body sinks the car. We push against injustice, this tells us, even if we must do it with our very bodies, drowning. Sacrificed.

“The Goddess archetype was erased and substituted with the ‘son’ who came through her womb. The son replaced Her as the God of Love. Sometimes represented as a boy with an arrow shooting at a butt.

“Èzili Dantò is the irreducible essence of the divine mother, love, justice and the female principle. Remnants of the worship of the mother of creation is everywhere on planet earth, either as the Black Madonna and child given a whitening or the heart with a dagger going through used every Feb. 14 in the U.S. on Valentine’s Day but with Greek pederasty’s cupid shooting a butt arrow substituted as the love divinity.” – Èzili Dantò, “Vodun, the Light and Beauty of Haiti”

At one point in the video, a hand pops out holding out a Final Call (NOI) newspaper with a photo of Dr. King. The caption reads “The Truth: More than a Dreamer.” The graffiti on one wall reads, “Stop shooting us.”

You could say Queen Beyoncé puts Minister Farrakhan, Malcom X and Dr. King on one platform. Black on Black violence at the highest levels squashed. Slay – to slay, the team has to get in formation, move as one. We’re not killing each other, but looking outwards together. There’s more.

At the most feted U.S. knucklehead sports event, in front of the largest audience in the world, Beyoncé took a huge chance. Wrapped in a Michael Jackson jacket, she sacrificed the banal for substance. Saw through her own Black points of reference.

Nixed what W.E.B Dubois calls our double consciousness – white eyeballs forced over Black eyes. Jeopardized her pop career for the greater good. Like an “albino alligator.” Deep irony there. The tragic mulatto. Dr. Frances Cress Welsing’s “Isis Papers” and fear of a Black planet and revenge of the albino alligator on the African parent. There are many stories, twists, confluences and contradictions to unravel.

There’s how Black people without in_formation continue to conjure up Michael Jackson’s defacement, not just of his nostrils but his melanin, and in broader context, the unwholesome wish for melanin recessive genes on a planet ruled by the Sun.

Old man Rudy Giuliani got on Fox News to say her Super Bowl performance was an attack on police who “put their lives at risk to save us.” Argh! Why that fool giving me work? Black love and pride equals an attack on white policemen? Is it not “decent and wholesome entertainment” for Super Bowl halftime?

Does Giuliani think he’s Bill Clinton 1992 and Beyoncé is Sistah Souljah to take down because she artistically lifts up Black power? The question for Giuliani is why is showing Black love and a historical consciousness a criticism of systemic U.S. racism? Uhmmmm? 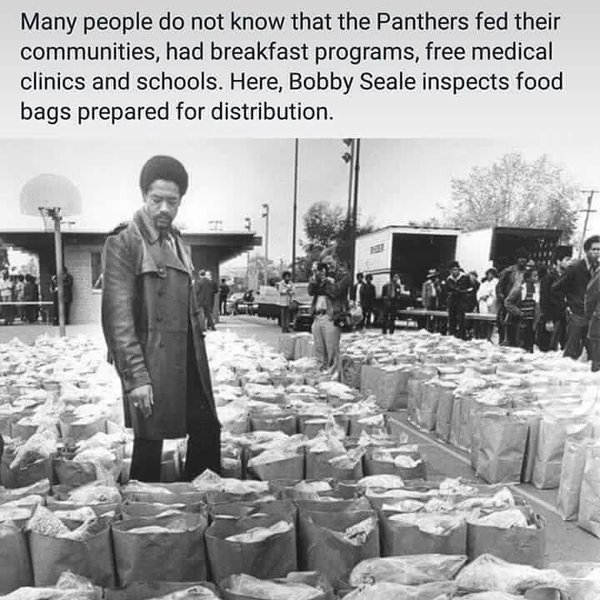 Yeah, this is the country, these are the people that Empire and its media minions want to image as grossly violent and dangerous because of their “power vacuum.”

What did indigenous Afrikans do, millennium upon millennium of years ago, when the Europeans weren’t around to colonize everyone’s breath, with their nervous systems’ needs for a governance structure controlled by a tiny power elite? From Superdelegates to the One-Percent up to the Bank of International Settlement scheming families?

In Haiti, without a president, the people joyfully celebrated the last two days of Carnival. Fueled up on fun Black protest traditions to exorcise trauma, like Beyoncé’s “Formation.”