Providence Baptist Church was packed for the second homegoing service for Dr. Espanola Jackson, a legendary icon to the people of Bayview Hunters Point and citywide. Her family and friends and city and state officials who have felt her pressure to do the right thing came to honor her so as to make sure, despite her transition, that justice prevails like a mighty stream – pure, powerful and calm. They all know that when she was upset, her mighty rage stormed the boards, commissions, committees and every agency and organization she could hit.

Mother Jackson’s priorities were public housing, Section 8 and good homes for all. Education also was a priority. She fought to keep schools and community colleges open so that the youth could meet national academic standards. She was our community activist mother, our community queen, warrior and the mayor of Bayview Hunters Point – a fighter for her people for 58 years with Francisco Da Costa, her right hand man.

To Mother Jackson, procrastination was no excuse; she would get the job done. She would never give up. She would say, “Just give it to God, baby. You done all you can do, all you gotta do to get the word out, and the Creator will do the rest. Pray before you go out. Don’t worry about what you’re going to say; the Creator will give you the words. You are just an instrument.”

She would tell me: “I am doing God’s work, not for fame or fortune or hidden agenda. Politics is like water, air; you’ve got to have them – they are the breath you breathe.” It was hard for me to understand that, but when my son, Yalani Chinyamurindi was murdered Jan. 9, 2015 – four boys shot down in a quadruple homicide, my only son, just 19 years old, trying to cash his check on his half hour lunch break, working for Benihana Japanese Restaurant in Japantown – then I understood what she meant. The case is still unsolved.

She never stopped because she never stopped loving us. Regarding all the disagreements and arguments about issues, she made us feel loved and as important as the powers that be – if not more important – because we are, she felt, inferior to none of them. She and Francisco Da Costa tackled issues on the frontlines – local, national and international. He writes in his web pages that he does not fear them, as she did not and as I do not.

Mother Dr. Espanola chose a young Hebrew activist when she passed the torch to me, a Hebrew woman. Our tradition teaches that there will be a time when the Hebrews would have to be called to help solve problems and end corruption.

Her daughter, Gwendolyn Jackson-Rich, kept her word. She said she heard and her husband heard her mother say, “Sala is a part of this family,” when the family was gathered around her in the hospital. Gwendolyn, honoring her mother’s words, did not question it. Though not knowing me, she said: “My mother has spoken. You will be of a part of this family.”

I am told by Francisco Da Costa to honor this blessing and don’t take it lightly. But how can you write all about this great and magnificent and miraculous and spiritual women on one page? I needed to give the people the truth of what’s happening to us, and one way the torch can be passed is by speaking the truth to you.

The two homegoing services were decent and in order. The first, at Grace Tabernacle Community Church on Thursday, Feb. 4, was for the community and Mother Jackson’s people to speak their hearts. Those on the list and those not on the list were made to feel important and were able to come up to the platform and speak equally. The speakers spoke not too long, neither too short – it was the time for the people to express how she touched our lives. It was said we need five to 10 people to fill her shoes. I agree.

Well, where are you? We’re ready. She wanted that sewage plant gone from our neighborhood. It was not done. Where are all you leaders? She was in her 80s; how was she going to do it alone? Money was promised to Bayview residents distinctly for them. Where is it? If you actually thought that her spirit would not rise, you need to know we will fight to the end, and I will fight to the death.

Mother Dr. Espanola fought to the death. In her hospital bed, she was asking about her school, Southeast Community College, saying: “Baby, we have to talk. Baby, what about my school and that plant company in the back, Decorative Plants that Allen owned?” She gave her word – I was there – that he was not going anywhere. She wanted young people to be hired and taught horticulture. I was there, so I myself will speak to make sure her priorities are all the way carried out. The Public Utilities Commission needs to be bombarded; we need to attend their meetings to get what our people deserve.

Also present was Minister Christopher Muhammad, who gave her credit at the first service, saying it was because of Mother Dr. Espanola Jackson that they got their building on Third Street. Time ran out and not all were able to speak, but Carol Tatum was there, along with Yvonne King, Oscar James, Mayor Lee, Supervisors’ President London Breed, former Supervisor Sophie Maxwell, Dr. Caesar Churchwell and extended son Kevin Williams, keeping alive the memory of his mother, namesake for the Ruth Williams Theater at the Opera House.

Bishop Earnest L. Jackson of Grace Tabernacle, Mother Dr. Jackson’s pastor, gave the eulogy and thanked Rev. Calvin Jones of Providence Church for hosting. Daughter Gwendolyn Jackson-Rich spoke to PUC Director Harlan Kelly and said, “Leave Southeast Community College alone in memory of my mother!” That’s when the announcement was made that the school, her school, Southeast Community College, will be named after Dr. Espanola Jackson.

Bishop Earnest L. Jackson of Grace Tabernacle had reached the mountaintop the day before, using that moment in time, the quiet hour on Feb. 4, to ask Harlan Kelly of the PUC, “Are we going to have any problems concerning this college? Are we?”

I have to take this time to say to all involved in the two homegoing services, a job well done. The churches were used for civil rights issues and in memory of our community activist queen. We should have every pastor and church organize and do what needs to be done in her memory. What a miraculous fight that will be! 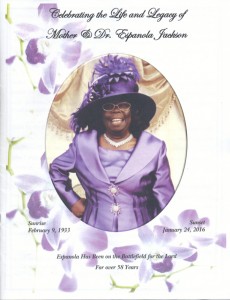 When the last service was over, it was at least seven long stretch limousines with a police escort and royal carriage for the family and Francisco Da Costa. Police Chief Suhr rode with the escorts. At the Feb. 5 service, he said he had made it to the hospital, that he was praying for forgiveness and he went to Dr. Espanola Jackson. She forgave him. And Art Agnos told us we can win by following the example of Mother Dr. Espanola Jackson.

Though she was one voice, she made a difference by her feistiness; like a boxer, she fought a good fight and now she’s passing the torch to each of us. We are watching. What are you going to do now that her work is done? She lived her life to the fullest. Action was her reward.

Shaloam in Hebrew means peace to you all. Her soul is at rest. Prayers for the family are needed at this time of great loss of an 83-year-old matriarch. They are hurting. Pray for their strength, courage, peace, health and healing – and at the end may they come out swinging because that homegoing service was royal!

Salahaquekyah Chandler, aka Queen Califia, the Black Amazon queen who California was named after, can be reached at salahaqueenyah@gmail.com. In honor of Black History Month, check this out: Create your life as Mother Dr. Espanola Jackson created hers. From her extended daughter, Sala Haquekyah, aka Queen Califia, I’m out.