by Paradise the Poet

Do Black lives matter? I challenge everybody on planet earth to retrace their roots; you will find that the more you go back, the more you get Black!

Because Mama Af Ra Ka gave birth to humanity. And Africa is the only continent rooted in the earth, that doesn’t float and oscillate. Afrika is the breadbasket of the world. Free Afreeka, for humanity’s sake!

Black hands built the pyramids and crafted the stolen artifacts in your museums.

Black free labor, muscle, blood, sweat and tears built this nation, solidified its foundation, just as the original Statue of Liberty was Black – a dedication sent from France in honor of our struggle and liberation.

Black bosoms breast fed your ancestors and enabled young America to grow healthy and strong. We were those so called “lazy” people you used to give dozens of jobs to during slavery, when we worked all day long. But now that we are free, America acts like one job is too many.

Even though brother George Washington Carver, the Plant Doctor, saved the South, after your rabid cotton farming and profiteering depleted the soil to such an extent that the entire Southern landscape was on the verge of becoming a desert, it was replenished by the wizardry of Dr. Carver, who invented over 300 uses for the peanut, including the abundant soil enriching peanut crops and the peanut butter that fed starving Southern mouths.

And please stop acting like a fanatic with the Wizard of Tuskegee’s gift of plastic.

And what would you have done without the Blues you gave us and the music we gave you? The music that you use to sell your products during practically every television commercial you do? And when you were in the trenches during World War II, whose Jazz music as a symbol of freedom and democracy encouraged you and enabled you to dance during the Depression Era and Swing out of it too?

The immortal cells of Sister Henrietta Lack helped science find a cure for polio and are still being of service to humanity decades after she departed from the earth realm, a world hero!

The Olmec created chocolate; the ancient Egyptians created beer. You want our booty and our bounty but you don’t want us here?

Well, like KRS1 says, “We will be here forever!” Because the Black Universe knows that Black lives matter!

Think about that when you stop at a traffic light and notice its red, black, green and sun yellow Afrokin colors, because it, my beloved, was invented by Garrett Morgan, a brother.

And your history books don’t tell you that the Charles Patterson Automoble Manufactoring Company in Greenville, Ohio preceded Henry Ford’s models. And he too was a brother from another Black mother.

And I bet you don’t know who the cell phone was invented by: Dr. Henry T. Sampson. And your check will be in the mail box if wasn’t also invented by a Black man.

And your Super Bowl wouldn’t be so super as the for-whites-only Vanilla Bowl.

So the next time you turn on a light or an air conditioner to be cool and you put on a pair of shoes and walk to the refrigerator to get a cold beer and call your mom on your cell phone and get in your car to go buy your girlfriend some chocolates and stop at a traffic light and look at your clock to see what time it is or your team wins the big game, ask yourself if – no, admit to yourself rather, that BLACK LIVES MATTER!

Announcement: Paradise the Poet will be performing and cohosting a townhall forum at Project Back to Africa’s Black Love Mixer at the Black Repertory Theater in Berkeley, March 10, 7 p.m. 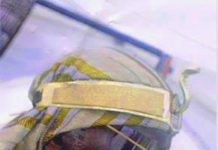