With the presidential selections rolling around, the U.S. is priming itself for a change in public leadership. The Obama presidential years have whipped up the racist sentiments of the white population into a feeding frenzy that has Trump and the Klan marauding across the country making hate speeches as a Trojan horse tactic, persuading people on the fence to agree to lay the U.S. presidency at the feet of the tried and tested “Butcher of Libya and Haiti,” Hillary Clinton, without qualms. 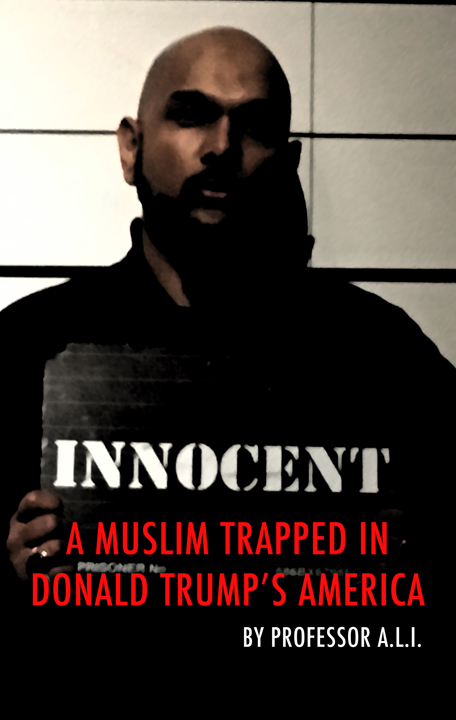 Longtime MC and current author Professor A.L.I. has created a book of essays that describes the politics and feelings of a Sri Lankan Muslim convert in the U.S., who has to cope with the Islamaphobia that is created by the international corporate media and the government sponsoring Islamic extremist groups to covertly carry out foreign policy objectives worldwide. Check out Professor A.L.I. in his own words, as he shares his opinion on these earthshaking topics.

M.O.I. JR: What is the name of your book? And why did you title it that?

Professor A.L.I.: “A Muslim Trapped in Donald Trump’s America” is the title. This past year, every time I went to my timeline on Facebook or Twitter I became increasingly shocked.

At first I thought Donald Trump’s presidency was a joke, then it seemed like it was actually serious, but unlikely, since those who supported him seemed to be the most bigoted lot in our nation, and yet, his inevitable success spoke volumes on how deep-seated the intolerance in our country was and how powerful phobia could be in galvanizing a population behind a demagogue.

I wrote this book as a historian, because I felt we are looking at the exact climate that once gave rise to the Nazis, and I wanted to go on record to speak out against what we are seeing, just as I imagine a Jewish dissident might have done in Germany in 1936. I wrote this as an artist, building on the themes from my previous work, including various albums, and diving deeply into my own narrative and creating this piece of art based on my truth for my fan base, to offer clarity on being a Muslim in America during this time and inviting their alliance so we can withstand the tide of racism and discrimination that we all face.

Finally I wrote this as a father, on behalf of my children and all other Muslims, Sikhs and people of color targeted by those caught up in the Donald Trump hype.

Professor A.L.I.: The story is a collection of essays that begins with the events of 9/11 and its direct impact on the Muslim and Sikh communities and on me. It flashes back to years earlier when I first became Muslim and how even then Islamophobia existed, as well as extremist elements in the Muslim community.

It then flashes forward to being proactive as an educator and artist, trying to dispel the fear through knowledge and building bridges with young people just as the media was building walls. Finally, it catches the reader up through tragedies like the Boston Marathon bombing, the rise of Al Qaeda, the Taliban and ISIS, while explaining their true roots and takes the reader to 2016 at the cusp of Donald Trump’s America and showcases the bleak future painted for Muslims, Sikhs and people of color in America in the promise of Donald Trump.

M.O.I. JR: Why did you decide to drop it now, before the elections?

Professor A.L.I.: Donald Trump may or may not be the Republican candidate, but it looks likely that he is. He may or may not even be president, but while many of my friends have vowed to move to Canada while they vigorously de-friend Trump supporters online, I decided to use my voice to combat the ignorance he preaches.

I’m not trying to make money off of this book; its available on Kindle as an almost free download – only 99 cents – because my main interest is to educate people on Islam, on Islamophobia and finally on how they are being manipulated by the media and by an unlikely presidential candidate who is using bigotry and hate as vehicles to bolster his campaign.

Additionally, my most recent album, “Tamilmatic,” with a subtle nod to Nas’s “Illmatic,” drops the same week and has many overlapping themes, like hegemony, the modern slave trade, economic exploitation of the global Black community, to which Tamil people belong, and of course Islamophobia.

M.O.I. JR: How do you feel about the three major candidates Hillary, Trump and Sanders?

Professor A.L.I.: It’s hard for me to support any candidate who talks about war in casual terms. I’m a global citizen as much as I am an American one, and it’s hard for me to advocate for any presidential hopeful who could advocate the use or our soldiers or drones to kill innocent civilians in other places.

Furthermore, as a person who truly values liberty, the idea of big government that infringes upon that value is problematic to me; therefore I’m not a big fan of any of these major candidates. They are far from being akin to a candidate like Cynthia McKinney in my eyes.

M.O.I. JR: Who is your target audience?

Professor A.L.I.: People who are willing to learn and ask questions, as well as those who are engaged in the work of building community – in this book people will understand who is responsible for groups like the Taliban and ISIS, and they will be able to diffuse their general irrational fear of Islam – aka Islamophobia – and realize who and what that fear should be directed against.

In addition, it is my hope that by doing this and by inviting people to share these narratives, the people armed with knowledge will look less like sheep and therefore be less inclined to become the inevitable lambs that will be slaughtered as bigotry and xenophobia reign supreme in the America that Trump promises. This book was written with Muslims, Sikhs, the global Black community and people of color and our allies in mind.

It is my hope that by doing this and by inviting people to share these narratives, the people armed with knowledge will look less like sheep and therefore be less inclined to become the inevitable lambs that will be slaughtered as bigotry and xenophobia reign supreme in the America that Trump promises.

M.O.I. JR: How has the Islamic community responded to your most recent work?

Professor A.L.I.: There are two poles to the Islamic community in America. There is the immigrant pole and the indigenous pole. The immigrant Muslim communities are largely silent on these topics, nervous about their green card status, or under the illusion or impression that they are here temporarily, only to return to their own countries someday.

These communities may watch the rise of Trump nervously but are ill-equipped to exercise their rights, paralyzed by their own fear that by speaking out they become a more visible target for those who would disagree with their views. This group will have a hard time overtly supporting this work. 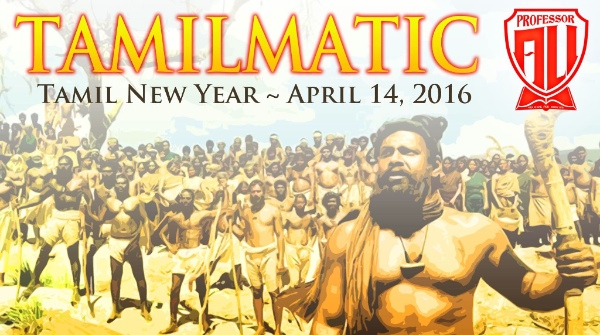 The other side of the Islamic community is comprised of indigenous Muslims, converts like myself as well as youth who were born here and who have grown up in this country. And, while they may belong to many different denominations of Islam – from Shia, Sunni, Ahmadiyya, the NOI, the NGE and the Sufi Muslims – their home is America.

This group, in spite of its subdivisions, remains comfortable with its American identity and there are many people in this group, from comedians like my brothers Dave Chappelle and Dean Obeidallah to activists like sister Linda Sarsour and my fam, Ameer Hasan, who are doing this work and will support my writing as well.

M.O.I. JR: Where can people buy your book?

Professor A.L.I.: If people want a hard copy, they can purchase the book on Amazon.com, or they can download the Kindle for 99 cents. I wanted to give it away, but Kindle insists that I sell the book, so I set the price at minimum. 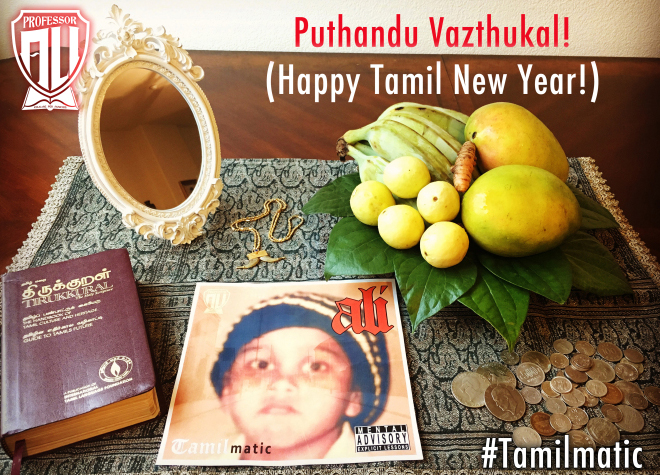 “2pac in Tamil” was the debut music video from “Tamilmatic” and was featured in many publications, including the popular Daily Kos. Read Professor A.L.I.’s incisive commentary on 2pac, Bob Marley, their Tamil counterpart, Bharatiyar, the mahakavi or illest MC, Tamil Hip Hop and Black Lives Matter at https://professorali.com/.

Professor A.L.I. authored the following article to go along with the release of the album and to help people understand the Tamil tradition.

This morning my children awoke, like I did as a child, came downstairs with their sleepy eyes and looked upon the Tamil New Year display with mango, guava and green bananas representing the fruits of our people, betel leaves showing our fortune, turmeric for our health, gold jewelry passed down my family for generations and coins from places we as Tamil people have lived in the Diaspora. Next to it is an open copy of the “Tirukkural,” showcasing the spiritual knowledge of our people, and a mirror to reflect on our past.

Next to the table were gifts for my two children and this year we celebrated the new year of our people by playing Tamilmatic, a piece of art, telling the Tamil story of struggle, sacrifice and survival.

“Tamilmatic,” the album, is in a way its own display for the Tamil New Year. For example we Tamils great each other on this day by saying “Puthandu Vazthukal!” or “Happy New Year!” and “Tamilmatic” opens with an introductory track that introduces the album, greeting the listener with a Sanskritic hymn and prayer that is cut short by the nadaswaram, a Tamil clarinet, and affirmation of the Tamil culture.

The rest of the album is like the Tamil New Year display itself. The song, “Vampire Kiss,” talks about the history of the gold jewelry and “Red Dot” traverses the planet, like the coins on display, and speaks to the Diaspora of our people.

“2pac in Tamil” explores the impact of the Kavi, or poet, on society.

The fruits of the album are “Saint Thomas,” “Herstory” and “Our Queen,” which pay homage to figures from Tamil history who had a profound impact on humanity. “Coolie High,” “Mappila!” and “Serendipitous” showcase our survival and, like the turmeric, our health and longevity on this planet, in spite of the challenges we faced. “2pac in Tamil,” which explores the power of words, of our Mahakavi, or greatest poet, Bharatiyar, and is like the holy text the “Tirukkural,” and “Card Game,” which tells the story of our people’s success, despite our hurdles, and shows our fortune like the betel leaves in the New Year’s display.

“Tamilmatic” follows the following three branches of our global journey: the Coolie slave trade, post-colonial migration and a refugee crisis stemming from a brutal war, and it finds a way to remain upbeat and positive, like the impact our people have had on this planet. So please celebrate Tamil New Year with us by getting a copy of “Tamilmatic” on iTunes or Amazon or streaming it for free on Spotify and, through the music, walk the journey made by millions of Tamils.

“Our Queen” tells the story of Queen Velu Nachiyar who defeated the British East India Company.