The Rwandan Genocide is commemorated in Rwanda and at the United Nations as “the Genocide against the Tutsi.” However, it was preceded by the assassination of three Hutu presidents and by the massacre of hundreds of thousands of Hutu civilians in Burundi. There is also ample evidence that hundreds of thousands of Hutus, as well as Tutsis, died in the Rwandan massacres.

KPFA Weekend News Anchor Loula Acanmu: April 6 marked the 22nd anniversary of the assassination of Rwandan President Juvenal Habyarimana and Burundian President Cyprien Ntaryamira. The assassinations were widely believed to have triggered the ethnic bloodletting known as the Rwandan Genocide.

In Rwanda, the event is officially “the genocide Against the Tutsi,” despite evidence that hundreds of thousands of Hutu people also died. Tutsi governments in Rwanda and Burundi have been allies of the West, and Western officialdom has therefore found it convenient to identify Rwanda and Burundi’s Tutsis as the victims in both countries.

KPFA/Ann Garrison: Le Beni, April 6 was the 22nd anniversary of the assassination of two Hutu presidents, Rwanda’s Juvenal Habyarimana and Burundi’s Cyprien Ntaryamira. Can you tell us about the significance of this event in the region’s history?

Le Beni Tazira; Yes, I can, but as a Burundian, I can give it more on the angle coming from a Burundian. What we saw was not just assassination of Cyprien Ntaryamira, because a few months before, another Hutu president, Melchior Ndadaye, was also assassinated. So, to Burundi, it was a second hit. And we know very much what happened after the first – chaos all over Burundi.

And in neighboring Rwanda, the people there had seen what happened in Burundi with the killing of Ndadaye and they were watching closely. Remember we’re very close neighbors. When someone shouts from one country, you can hear him in the other country. And so, by the time the plane was gunned down in Kigali, I think the population reacted even more aggressively than in Burundi.

And so, it wasn’t just a plane that was shot down on that specific date. I think it was some history before that, where the killing of Melchior Ndadaye, another Hutu president, caused a lot of insecurity in the region.

Tazira: Yes, and here’s how the region looked like. In Burundi, President Melchior Ndadaye was assassinated by Buyoya’s Tutsi military. Buyoya was the previous president, and he had a military that was 100 percent Tutsi.

They came to his (Ndadaye’s) house one night and killed him – and killed most of his government. And a few survived and were able to create a rebellion.

But next door in Rwanda, they were in the middle of a war against a Tutsi rebellion. And so I believe the Rwandans were watching Burundians, what’s going on. Once they killed the president, you had a lot of destabilization. Then you had military going into our villages and just massacring people. 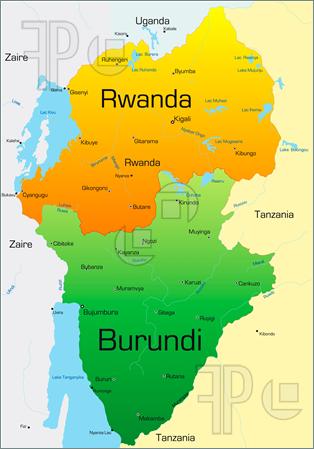 And so you had so many hundreds of thousands … we had up to 1.5 million refugees going into Tanzania, in Congo, in Rwanda. And so the Rwandese saw that happen in Burundi and how ruthless the military had been on the people.

Tazira: Yes. Actually it was up to 1.5 million. After that you had the downing of their own president. So that was actually the beginning of the whole region blowing up.

KPFA: And that was Burundian American commentator Le Beni Tazira.

As the African Great Lakes Region, in Tazira’s words, “blew up,” hundreds of thousands died in the Rwandan Genocide. Two million Rwandan Hutus fled into the Democratic Republic of the Congo. Rwanda, Uganda and Burundi invaded the Congo, and millions of refugees and Congolese people died in the ensuing Congo Wars. And Congo’s immense resources were ruthlessly plundered.  At the same time, Burundi suffered a brutal civil war from 1993 to 2005.