In the April 25, 2016, issue of SF Bay View, Alice and Claude Gatebuke, two Rwandan Genocide survivors, asked the percipient question of whether “Black Lives Matter” in reference to the Clinton administration’s refusal to act to save Black African lives in the Rwandan Genocide of 1994 – after then Secretary of State Madeleine “there’s a special place in hell for women who aren’t voting for Hillary Clinton” Albright found it politically expedient not to call the face to face slaughter of 800,000 to 1,000,000 Black lives of civilians, women and children a “genocide.” President Clinton, leader of the greatest military in the history of the world, not only did not act, but, like a coward, blocked other powers from acting to save lives.

What must be understood, the Rwandan Genocide was not an exceptional incident for the Clinton administration in reference to the expendability of human lives of color; it was just one example of a consistent foreign and military policy from his first day in office to his last. Clinton later claimed he regretted his lack of action, but he never admitted to obvious prejudice in the decision making process that led to his catastrophic decision not to act.

The toll on soldiers of moral integrity when forced to stand by as helpless observers while criminal acts are perpetrated on the very civilians they were deployed to protect in the course of what is called a humanitarian operation is a scarring experience. Two years after the United Nations, at the behest of the Clinton administration, gutted his forces to the point of ineffectiveness, the former commander of the U.N. forces in Rwanda, Lt.-Gen. Roméo Antonius Dallaire, was found unconscious in a suicide attempt in which he combined alcohol with his anti-depressant medication.

The toll on soldiers of moral integrity when forced to stand by as helpless observers while criminal acts are perpetrated on the very civilians they were deployed to protect in the course of what is called a humanitarian operation is a scarring experience.

I too have lived with the memory – and subsequent professional consequences – of being sent on a humanitarian mission under the civilian commander whose conduct was inescapably biased and cowardly.

Over three years prior to the Rwandan Genocide, I was assigned as the Top Secret SCI (Sensitive Compartmented Information) strategic intelligence watch officer for Operation Restore Hope in Somalia when President George H.W. Bush responded to the December 1992 Security Council Resolution 794, authorizing the use of “all necessary means to establish as soon as possible a secure environment for humanitarian relief operations in Somalia.” We understood that we were to operate as a humanitarian force in an extremely lethal war zone.

However, less than two months later, we were operating under new Commander in Chief Bill “not one U.S. casualty” Clinton. The operation tempo changed dramatically as the operation was renamed Operation Uphold Hope. After over a dozen American casualties resulted during the Battle of Mogadishu on Oct. 3-4, 1993, the name of the operation was again changed, to Operation United Shield, which my soldiers had the guts and honesty to call by the name “Operation Remove Hope.”

While the Somalia operation ended in utter defeat and recrimination, I simultaneously worked as the strategic intelligence watch officer for another humanitarian operation, Operation Northern Watch, supporting the civilian population of Kurdistan. This operation, among a non-African population, was one of the most successful in military history. The difference between the two operations, I say with tears in my eyes, was black and white.

The difference between the two operations (Somalia and Kurdistan), I say with tears in my eyes, was black and white.

In September of 1994 I was assigned as a Top Secret SCI counterintelligence officer to another humanitarian mission, Operation Restore Democracy in Haiti. From Day One, the mission success, or victory, was not a goal. The Priority Intelligence Requirement was force protection.

My soldiers came to call this mission Operation Live and Let Die. In my capacity as an intelligence officer who believed humanitarian protections covered all civilian populations, I was separated from the U.S. Army because of my action as a military intelligence officer.

Concerned with human rights violations occurring in the proximity of U.S. forces in Haiti and perceiving what appeared to be indifference on the part of my command toward those suffering from these violations, I conducted an unauthorized survey of the National Penitentiary in Port-au-Prince, for which I was court martialed and dismissed from active service – ending the 16-year career of a fourth generation army officer. I was given the American Civil Liberties Union’s Kharas Award for the same actions as those for which I was convicted.

Concerned with human rights violations occurring in the proximity of U.S. forces in Haiti and perceiving what appeared to be indifference on the part of my command toward those suffering from these violations, I conducted an unauthorized survey of the National Penitentiary in Port-au-Prince, for which I was court martialed and dismissed from active service.

Later in 1994, another humanitarian disaster was taking place in the former Yugoslavia. After many setbacks and mistakes, the mission was in a NATO operation in a European country with a Caucasian population; defeat and running away was not an option. Debating the meaning of the word “genocide” was not an option. The war ended with the Dayton Accords signed Dec. 14, 1995.

The hell of “Black lives” in Somalia has never ended. One of my jobs during that former operation was providing U.S. intelligence material on Somalia to the Saudi Arabian army. The Moslem areas of sub-Saharan Africa that did not have Saudi supported Salafist or Wahhabist inspired movements like Boko Haram and Al-Shabab when the U.S. first intervened in the area now look like they will be at their mercy for generations.

In Haiti, the Canadian and Brazilian military forces are trapped in the same “humanitarianism for those considered insufficiently human” trap as previous U.S. led forces. In 2006, Gen. Urano Teixeira da Matta Bacellar, the military commander of the United Nations Stabilization Mission in Haiti (MINUSTAH), was found dead in his hotel room, believed to be suicide.

In Haiti, the Canadian and Brazilian military forces are trapped in the same “humanitarianism for those considered insufficiently human” trap as previous U.S. led forces.

Since the 2010 earthquake, a civilian humanitarian mission, dominated by the – believe it or not – Clinton Foundation, is considered one of the worst administered relief operations in history. The real question is, do the Black lives on our planet really need another Clinton administration?

Dr. Lawrence P. Rockwood is a former U.S. Army counterintelligence officer. After his separation from active military service, he served as a fellow with the Center for International Policy, a consultant for the Institute for Policy Studies, Amnesty International’s Military, Police, and Security Working Group, and has been contracted as a human rights instructor for the Department of the Army and Department of Defense.

He received his Ph.D. in American Diplomatic History in 2005 from the University of Florida. The University of Massachusetts Press published his book, “Walking Away from Nuremberg: Just War and the Doctrine of Command Responsibility in the American Military Profession,” in the fall of 2007. He is an internationally recognized expert on the laws of war and military doctrine and has published numerous articles on that subject. For speaking engagements, comments or questions, contact Dr. Rockwood at radical.history.tour@gmail.com.

‘Clinton is the most dangerous person alive,’ an interview with Edward S. Herman 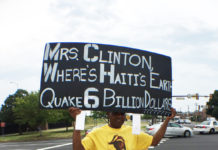 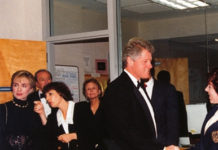 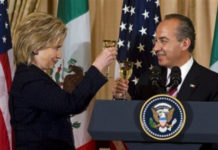