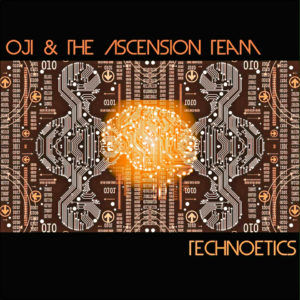 Right out of the musical lineage of Parliament Funkadellic, Georgia Ann Muldrow, Dudley Perkins and the Dungeon Family steps Bay Area bred producer Oji and his crew, the Ascension Team. Oji’s music is on some futuristic other level type of space vibe. He is like an Andre 3000, on a production level conjuring sound chemistries not ever heard before in widely known rap music.

I met him a few years ago along with The SomeothaShip Crew, Georgia Ann Muldrow and Dudley Perkins. His music is important to the area’s soundscape because producers like him don’t allow for the Bay to be characterized as one thing or another.

There is a huge diverse talent pool in the Bay that rarely gets exposed because mainstream radio and performance venues prefer to curate our taste to destructive or say-nothing rap, because we all know that knowledge, self-mastery and futuristic rap could change the dire situation that our community is in. Check out Oji as he talks about his craft.

M.O.I. JR: When did you start doing production and making music? When did you get into animation and graphic design?

Oji: I started doing music production in the late ‘80s, early ‘90s. I learned from my uncle Mark Elliott, who allowed me to sit in his studio sessions at FM Studios in Oakland – before music software. He worked on the big analog mixing boards and ADAT tape.

I started to produce for a lot of artists and rappers in Bayview Hunters Point, my old neighborhood. One day my studio got shot at because I was friends with two people from the rival neighborhoods of West Point and Harbor Road, who got into an altercation inside my old studio, which was in the closet of my bedroom.

Afterwards, I started focusing more on venturing out and into graphic arts. That helped me find bliss within myself. I was also inspired by Malik Seneferu, who is a legendary artist from H.P. I eventually won “artist in residence” at “The Point,” which is an artist colony at the naval shipyard in S.F.

That allowed me to meet other great artists like Joe Sam. I gained more experience having art shows at the open studios and creating a body of work that included beaded jewelry, masks, clay sculpture, paintings, illustrations and abstract paintings on canvas.

I got into computer animation approximately 10 years after that by searching for and trying out different animation software.

M.O.I. JR: What kinds of music does your album, which is coming out in June, consist of?

I wrote, produced, mixed and mastered the album, which features vocals by Sonica and my children doing background vocals. I started a home school for my children called “Ma’at Oji School of Arts & Sciences,” where they learn how to record vocals and do voice acting and instrumentation, animation etc.

M.O.I. JR: What inspired the name and sound of the album?

Oji: I always wanted to make music to dance to, so this album is inspired by dance. This album is in homage to my late uncle Allen Elliot, who recently passed away months ago. He was a dancer in a legendary Bay Area strutting group called Close Encounters of the Funkiest Kind. I let him hear the album while I was mastering it and I remember him dancing and bobbing his head to it.

This album is inspired by the teachings of Dr. Jewel Pookrum and Dr. Phil Valentine. I sent some songs from the album to Dr. Phil Valentine and he said this: “Interesting. These vibratory sound patterns (words) have similar frequency signal signatures as those I’ve intoned under Khu meditation” and “Yes indeed!! Love this. Baba Sun Ra is smiling from the ‘A-Realm’ at this.”

It also features a song I made titled “Channeling Sun Ra” in homage to the Jazz composer Sun Ra.

The name of the album is inspired by that which concerns the technology of consciousness. The sound was inspired by being made of sound and light, frequency and vibration, my children, who are on a couple of songs, sacred geometry, psychic paranormal experiences and an alien abduction, which I speak about in this interview: “Bay Area Rapper Abducted by Aliens.”

It was also inspired by spontaneous “kundalini” experiences I had. To make a long story short, when I was younger, the first racism I encountered was by other Black children at school. In elementary, I was teased and called big nose every day because I looked more African than other children and started to hate myself.

One day in the classroom I banged my head on the table and busted my nose. In middle school I was jumped by a gang and had a near death experience. From then I would get depressed every day, became suicidal and stopped believing in “God.”

Growing up, I had self-esteem issues until I was self-empowered by the art I created and a “kundalini experience.” I then found “God” within myself by investigating further the divinity of breath and health and nutrition.

The enlightenment and bliss I found meditating in nature helped me to stop drinking alcohol and handle stress more productively. So the “Technoetics” album is a celebration of life and how I thank the creator for helping me find truth and love.

It was recorded in Area 55, top secret recording facilities, where I specialize in the potential abilities of the kundalini life force energy.

The album is also soundtrack to a film I am working on titled “Rhythmic Cognition Theory.” Here is the narration for the film that I wrote as a poem in collaboration with the original artwork of Georgia Anne Muldrow: http://www.someothaship.net/oji-drops-a-jewel-rhythmic-cognition-theory-pt-1/.

M.O.I. JR: What musicians are you inspired by?

M.O.I. JR: You use a lot of animation in your videos. Why?

Oji: The reason why I started using 3D animation was because I wrote a short story that turned into an audio book more than 10 years ago. I figured out that it would be better as a cartoon or 3D animation, so I created a 17-minute-long short film called “The Gift Bearer,” which can be viewed here: https://youtu.be/DuxzgP7BF7M.

It was very tedious to make and took several months to complete. I also do animation for other artists. Here’s videos I animated for First Degree The D.E.: “Super Black” and “Black Bane!”

M.O.I. JR: How do you choose what artists you work with?

Oji: Usually I collaborate with other artists who are interested in my work. Over the years I have worked with and produced music for artists in Brooklyn, Atlanta, Moscow, France and Germany. Right now I am also collaborating with a singer in Brooklyn named Krena Dean.

M.O.I. JR: Do you have any performances coming up?

Oji: I do have lots of performances in the near future at local Bay Area open mics and radio stations. I will be performing at Mutiny Radio.FM in S.F. sometime in May. I will know the exact date soon.

Oji: People could keep up with my work online at the record label I am signed to, Fahrenheit Records,  Someothaship, Twitter: https://twitter.com/OjiEdutainment, Soundcloud: https://soundcloud.com/oji-edutainment, Youtube: https://www.youtube.com/user/OjiAscensionTeam and Facebook: https://www.facebook.com/ojiphotographies/.