The class was represented by two student speakers, one undergraduate and one graduate. Undergraduate speaker Richard Polote Jr. is a decorated U.S. Air Force veteran and received a bachelor’s degree in Africana studies. Like more than one-third of SF State students, he is the first member of his family to attend college.

He is currently working on a documentary film about the lynching of African American men in the Southern U.S. since 2000.

“We must dedicate ourselves to fighting systematic oppression, social inequalities and social injustices, just as those who came before us did. We must use critical thinking, conscious actions, strategic planning, community organizing. We must ask ourselves on an individual basis, ‘How did I contribute to humanity – and did my actions make the world a better place?’” said Polote.

Polote plans to pursue a master’s degree in Africana studies and journalism and to teach middle- and high-school students about African and African-American history. He is a native of Savannah, Georgia, and his mother, Kim Michael Polote, made the trip from Savannah to see him graduate.

San Francisco State University held its 115th commencement at AT&T Park, with a crowd of 35,000 on hand to cheer for the 7,200 graduates in the class of 2016. The class was represented by two student speakers, one undergraduate and one graduate.

Student commencement speakers represent their fellow students by wearing the academic hood of their respective colleges during the ceremony. Each college selects a top undergraduate and top graduate student for this honor. Polote is the undergraduate hood recipient for the College of Ethnic Studies.

Aliyah Shaheed is the undergraduate hood recipient for the College of Liberal and Creative Arts. A communication studies major and Africana studies minor, Aliyah and her debate team partner made SF State history this year when they went head-to-head with the nation’s top-ranked, undefeated debate team from Harvard – and won. She has been recognized as the top first-year college debate competitor in the country.

Writer and publicist Mary Kenny works in University Communications for San Francisco State University. She can be reached at mkenny@sfsu.edu. 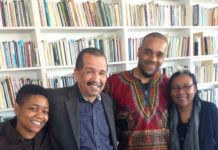