The third annual Sacramento Black Book Fair is taking place from June 3 to 5 in Oak Park at many different locations, featuring a number of different people who have other talents and careers and are authors also. To my knowledge, this is the only Black book fair in Northern California.

We need to support literacy in our community and to support authors writing the stories that come from our experience and are suited to benefit our people. Black book stores are becoming rarer and rarer, which makes the Sacramento Black Book Fair even more important.

I talked to the director of this monumental event, Mrs. Faye Kennedy, about this year’s happenings. Check her out in this exclusive Q&A.

M.O.I. JR: Can you tell the readers, how did the Sacramento Black Book Fair start?

The fair is an offshoot of Blue Nile Press, a Sacramento publisher of Black books. SBBF was created to showcase the depth and breadth of Black literature throughout the African Diaspora.

M.O.I. JR: What will be happening at the Sacramento Black Book Fair this year? Who are some of the featured authors and headliners?

SBBF will bring writers, publishers, readers, a children’s area, a community parade and vendors from Sacramento, the state, the country and the international community to a celebration of reading and writing, right here in River City. 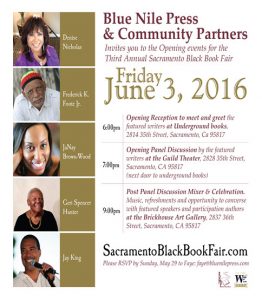 Our 2016 featured authors and headliners include the world renowned Denise Nicholas, actress, author, screenwriter and activist; Frederick Foote, local author and retired college professor; Geri Spencer-Hunter, local author and retired registered nurse; Jay King, a veteran music mogul who brings as much humility to the field as he does what has been called his genius, with three decades of continuous achievements in music, management, film, TV and radio, consulting and publishing, and JaNay Brown-Wood, a local author, college professor and early childhood activist.

The 2016 program will kick off Friday, June 3, at 6 p.m. with an opening reception hosted by Underground Books. At 7 p.m., the opening panel of featured authors will discuss “how to grow more readers in our community.” And at 9 p.m., we’ll close out the evening with a joyful mixer designed for networking opportunities for participating authors, vendors and community members – all happening at Brickhouse Art Gallery in historic Oak Park.

For the past two years, SBBF created and implemented “community read-in sessions” throughout Sacramento. SBBF called on parents, educators, grandparents, students, youth groups, businesses, schools, colleges, children’s programs and places of worship, book clubs, libraries, literary groups, bookstores and the general public to read with us now throughout 2015-2016. The planning committee reviewed, selected and created a book list for the community consisting of:

M.O.I. JR: What do you hope people get out of the Sacramento Black Book Fair?

Faye Kennedy: We hope the community will leave the Black Book Fair loving books and have a better and a deeper appreciation of Black literature created by Black authors and writers throughout the African Diaspora. SBBF is billed as a family-friendly event with activities for the entire family. We want to inspire the next generation of readers, writers, educators, thinkers, social justice activists, scholars, editors, journalists, film makers and visionaries.

Faye Kennedy: My favorite authors and titles include “Between The World and Me” by Ta-Nehisi Coates, “The New Jim Crow” by Michelle Alexander, bell hooks’ “Feminism Is for Everybody” and “For Freedom’s Sake: The Life of Fannie Lou Hamer” by Channa Kai Lee.

M.O.I. JR: Have you been to other book fairs prior to you starting your own? If so, which ones inspired you?

The Harlem Book Fair is my favorite for a variety of reasons: It’s located in the heart of Harlem, it’s in New York, and thousands of people, authors, writers, books, cultural vendors and beautiful Black faces gather to have fun and enjoy great literature!

M.O.I. JR: What is the importance of literacy in the Black community?

Faye Kennedy: A literate people can define and create their own destiny. Literacy allows any people – but specifically Black People – to document our rich history, legacies and everyday life through various forms such as books, film, poetry, journalism, plays etc.

M.O.I. JR: When you are not organizing the Sacramento Black Book Fair, what else do you do?

Faye Kennedy: Well, we organize Sacramento Black Book Fair year round. I do have a wonderful family – a very supportive husband, an older sister, a college-aged daughter, and lots of sisterfriends and brotherfriends. I collect teapots and I love books and reading.

M.O.I. JR: How can people get more info online about the Sacramento Black Book Fair?

Faye Kennedy: We encourage the public to visit our wonderful and informative website: sacramentoblackbookfair.com and join us June 3-5, 2016. Remember it’s all free and open to public!