An interview with Deltrice, the Voice of the Bay

Real love and loyalty is everlasting. On Feb. 2, 2015, at the young age of 37, the Bay Area lost The Jacka, one of its most talented and influential artists to ever breathe on a mic. The Jacka’s life was stolen from him when some coward murdered him in East Oakland off 94th and MacArthur. That dreadful day, the Bay Area lost a legend, and, simultaneously, Deltrice lost the love of her life. 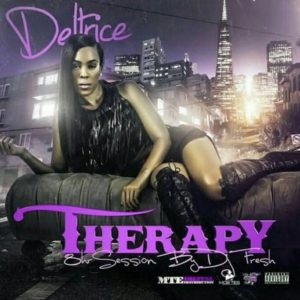 His death was a tragedy, however, his triumphant talent lives on through his loved ones and his music. The Jacka, with his exuberant talent and hood political lyrics, will be forever known as an icon in Bay Area hip hop and a legend in the rap game.

It has been hard for the Bay Area to move on without The Jacka, but we continue to push his legacy through his music and movement. I had the chance to sit down with Deltrice, who was dating The Jacka at the time of his death. We talked about the challenges she faces as a female artist in this industry and how she has utilized her musical talent to cope with the heartbreaking loss of The Jacka. Check it out …

Apollonia: Many people may know you from your musical talent around the Bay and being on the TV show with Missy Elliott, “Road to Stardom,” but for those who haven’t heard of you, who is Deltrice?

Deltrice: I was born in the Bay Area and I was raised in the church. I got an early start in music and loving music from my mother being a choir director and being involved with the musical aspect of church. She pushed me to get involved with the choir and singing since the age of 4.

I started recording my music at about the age of 17 years old and have just never stopped sharing my voice with my people. I’ve been on The Apollo, The Road to Stardom and a bunch of other television and radio shows trying to build my brand and my name from a young age. So I am very well known and respected in the community and Bay Area music game.

I work with my people when it comes to collaborating on this music. There aren’t many people that I haven’t worked with, which is why I believe I was crowned the “voice of the Bay” because I am on many artists’ albums singing and doing what I love to do.

Apollonia: What challenges do you feel you face as a female artist coming from the Bay Area?

Deltrice: It’s very challenging getting your music out there, especially in the Bay Area, because the rap game itself is a male dominated industry. I love the Bay Area, but often it is such a hard place for a female artist because of what we deal with in regards to sexism.

We as women sometimes have to approach this industry with an armor of tough skin to let people know we are professional in our craft and we mean business, because in this industry you can get ran over if you ain’t about yo’ business.

I love the Bay Area, but often it is such a hard place for a female artist because of what we deal with in regards to sexism.

Apollonia: You were in a relationship with the late great Jacka of the Mob Figaz when he passed away. How would you describe The Jacka as an artist as well as a person?

Deltrice: The Jacka was a phenomenal, real, raw and unscripted artist. He was a teacher and mentor to many artists and people around the world. He was a leader and he always delivered a message to his people and through his music.

He was a true artist and he could do it all. It was something special watching him create his music because he never wrote his lyrics; he would just go in the booth and go bar for bar. His talent was remarkable and creating the great genre of music was effortless for Jacka.

The Jacka was a phenomenal, real, raw and unscripted artist.

As a person and a companion, he was hilarious, loving and firm. He didn’t play, but he was so big hearted and someone you always wanted to be around. He was someone that I am blessed to have been able to experience life with.

Apollonia: You wrote and dedicated a song and video to The Jacka titled, “If Heaven Had a Phone,” and this song is dedicated to the love, bond and relationship that you guys shared. Can you tell me how emotional it was for you to overcome this tragedy and then talk about it through song?

Deltrice: After the death of The Jacka, I left and went out of town because I felt like I couldn’t be here anymore. I had to get out of the Bay for a minute and just get my mind right. I went into a heavy depression about his death because I was confused.

His life was taken away too soon. You know death is inevitable, but there are certain people who you believe are going to be in your life forever. You don’t expect those people to die, and I didn’t expect Jacka to die; it was a shock to the entire Bay.

That call knocked me off my feet. I went to LA and recorded the “Therapy” album in eight hours, and I think that was one of the first things I had to get off my chest. Singing and writing is the only way I knew how to deal with those feelings of hurt, anger and depression I was having.

There were a lot of mixed emotions because our relationship wasn’t really public like that. We had unconditional love for each other and when love is already understood, there’s no need to explain. I had to put aside the feelings I had that may arise from someone seeing the video or hearing the album and saying something that may hurt my feelings, and use this as my own therapy.

I was trying to express my feelings in the most cordial way as possible and I felt that this album had to be done as a healing process for me. Our love was real, and he has had a special place in my heart for 12 years.

Singing and writing is the only way I knew how to deal with those feelings of hurt, anger and depression I was having.

It’s a daily struggle overcoming the loss of Jacka. I’m still getting through it. I’m still crying and trying to heal from the loss. The anniversary just passed and I wish it was all just a dream. At the same time, I wish it didn’t happen in his home; the Bay took him away and healing is just a day to day process.

The Jacka had love for his community and he was never too Hollywood to go anywhere in the hood. So, for him to be murdered in the Bay was hard for me to accept.

Apollonia: There are so many other women who have experienced this same pain due to losing a loved one from senseless gun violence. What advice would you give to those women?

Deltrice: I would tell them to pray and continue to be with people who love you. You gotta stay prayed up and make sure you get you some quiet time and daily mediation in to cry and express those bottled up emotions the most productive way you know how.

Take things day by day and always remember in your memories the love that you and that person has. Never allow anyone to taint your memories. There are always gonna be haters and people that want to bring pain and strife in your life, but you must keep God first, pray and prevail.

You gotta stay prayed up and make sure you get you some quiet time and daily mediation in to cry and express those bottled up emotions the most productive way you know how.

At the end of the day, you have an angel looking over you. I feel I have the world’s strongest angel watching over me now that The Jacka has passed. You just have to believe that you will see that person again.