Block Report Radio interviews Los Angeles anti-police-terror activist Wil B of the A14. He speaks on his conviction and upcoming sentencing date, June 8. He speaks on the police lying on the witness stand. He talks about what people can do to help and more. 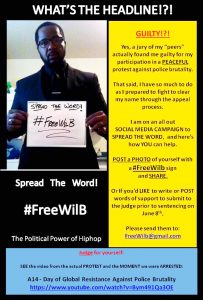 In our previous story, “Free Wil B and the other 13 defendants fighting police terror in LA!” Wil discussed the arrests of 14 peaceful protesters over a year ago: “As one of the 14 arrested one year ago for protesting police brutality and murder here in Los Angeles, I ask you to just think of all of the terrible stories you’ve heard over the last year about senseless police brutality, and yet, a year later, the LA prosecutor’s office persists in prosecuting us, NOT THE OFFENDERS, but THE PROTESTORS who have called for an end to the senseless brutality by police.”

For the next couple of days until his sentencing on June 8, Wil is asking people to join a hashtag campaign – calling it either the “Free Wil B Campaign” or “Free the A14 Campaign.” Take a piece of paper and write on top, “Spread the word.” In the middle of the page, write “Free Wil B.” Take a picture of you holding your sign and share it on social media. Also, send it to Wil at freewilb@gmail.com.

It’s important not only to free Wil B but to stop the silencing of dissent. “It’s your right to say you disagree (on any issue) and to do something about it,” he says. And he adds, “If we don’t stand up to this kind of oppression at the hands of the legal system, then instead of electing a president, we might as well go ahead and elect a king, because that’s where we’re headed. Get ready for King Trump!”

It’s important not only to free Wil B but to stop the silencing of dissent. “It’s your right to say you disagree (on any issue) and to do something about it,” he says.