One of the most explosive, genre creating music groups that has ever funked its way into the consciousness of the world from the United States is Parliament Funkadelic. In much the same way that the Grateful Dead represented for white rockers, Parliament Funkadelic was the cultural symbol for Black music in the ‘70s – genre-bending, fun, cool, sexy, futuristic and political.

Filmmaker Bobby Brown captured their epic history in his documentary “Tear the Roof Off the Mother,” which will be screening this Sunday, June 19, at the Boom Boom Room at a free screening at 7 p.m. as a part of the San Francisco Black Film Festival. For a lineup of all the outstanding films and events in this year’s festival, happening this Thursday through Sunday, June 16-19, go to sfbff.org, and read about many of them here on sfbayview.com.

Parliament Funkadelic was the cultural symbol for Black music in the ‘70s – genre-bending, fun, cool, sexy, futuristic and political. Filmmaker Bobby Brown captured their epic history in his documentary “Tear the Roof Off the Mother.”

Check out Bobby Brown as we discuss his film in this exclusive Q&A. 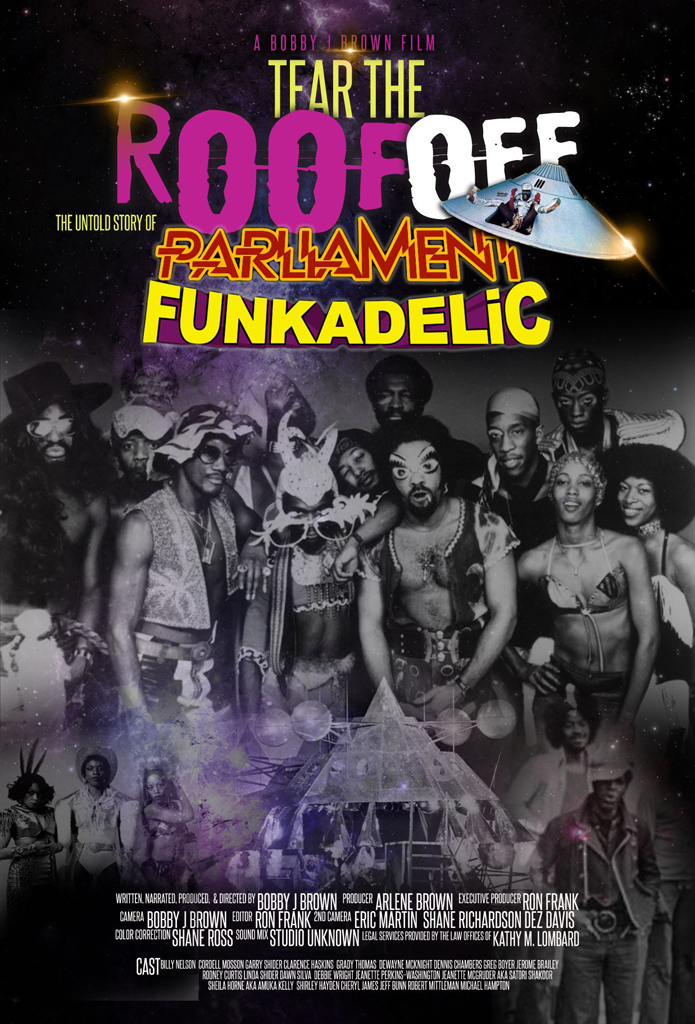 M.O.I. JR: Where did you get the idea to document the history of one of the greatest bands of the 20th century, Parliament Funkadelic?

Bobby Brown: It all happened by coincidence. I was working on a feature and was looking for someone to do the musical score. I was introduced to Garry Shider, whom I didn’t recognize without his iconic diaper.

We were talking and he asked me what else I had done. I told him about my documentary, “Off the Chain.” This film is about the misrepresentation and abuse of the American pit bull terrier. He immediately mentioned that he loved that doc.

He then replied, “I wish somebody would do a doc about us.” I said, “Us? What do you mean?” He said, “Parliament Funkadelic! I’m Star Child, the diaper man!”

I replied, “Get the hell out of here.” I stuck my hand out, shook his hand and said, “I’ll be here tomorrow with my camera to interview you.” The rest is history.

M.O.I. JR: How did you get in touch with the old school members of Parliament Funkadelic and their extended musical family? How did you choose who you wanted to interview?

Bobby Brown: Garry Shider introduced me to George Clinton. I went to about seven to 10 shows and spent time with George. I hung out on the tour bus, back stage and on stage during the show filming close ups of the performances.

My goal was that I wanted all the original members of Funkadelic and Parliament – the Hall of Famers – the members who actually created this unique genre of music. That proved to be a bit more difficult because they were no longer with the group.

Everyone was a huge fan of the show. That seemed to really seal the interviews. Timing was everything.

I wanted all the original members of Funkadelic and Parliament – the Hall of Famers – the members who actually created this unique genre of music.

M.O.I. JR: You spent some time during the film talking about the plight of the Funkadelic singer who sang “Tear the Roof off the Mother,” the guitar player on “Maggot Brain” and “The Brides of Funkenstein.” Why were their stories significant to the film?

Bobby Brown: Jerome “Bigfoot” Brailey was with the Five Stairsteps. One of my favorite songs is “Ooh Child.” Jerome eventually became the drummer for P-Funk during the pinnacle of their success. The Mothership Connection Earth tour, ‘77-‘79.

Jerome wrote the hit single, “Tear the Roof Off, Give up the Funk.” That was P-Funk’s first song to go gold. His name was listed as writer and publisher. I really don’t want to give too much away about the film, but Jerome should be a very rich man from that song alone.

“Maggot Brain” was written by Eddie Hazel. He was the next greatest guitar player besides Jimi Hendrix. As mentioned in the film, Eddie was supposedly high. George put him in a room and whispered something about Eddie’s mother dying and put the guitar in his hand and the rest is history. You can feel the emotions and anguish in that 10 minute guitar solo – one of the most phenomenal guitar solos in history.

George created characters for his performances and songs. One of the characters was Dr. Funkenstein. The bigamist Dr. Funkenstein needed a wife and he created two, “The Brides of Funkenstein.” Dawn Silva and Lynn Mabry were the original “brides,” but then came Jeanette Magruder and Sheila Horne.

They were the blueprint for groups to come. Without them there would’ve been no Rick James’ “Mary Jane Girls” or Prince’s “Vanity 6” or “Apollonia.”

The “Brides” style of song and appearance won them “Best New Artist” in the music industry, beating out Cheryl Lynn and the Pointer Sisters. They took off like a rocket on the music charts – and what happened next? Well, like I said, if I tell you everything, then you wouldn’t need to view the documentary.

M.O.I. JR: How long did you spend making this film? Where was most of the interview footage filmed?

I spent 10 years making this film and the interviews were all over the United States.

M.O.I. JR: How do you feel about making a documentary that will, maybe for good reason, tarnish the image of the King of Funk?

Bobby Brown: Documentaries, by definition, are life stories. This is the point of view, the experience, of the original members of Parliament and Funkadelic. I rolled the camera and this is the story that unfolded. I had no agenda. The members just poured out their wonderful experiences, broken hearts and their disappointments to the camera. The true untold story.

M.O.I. JR: I thought it was ironic that in the film most of the interviewees talked about the Parliament Funkadelic era time period as one of the greatest and worst times of their lives. Can you explain your analysis of this?

Bobby Brown: The excitement of doing what you love can be tarnished by the realities and the “business” of show business.

Everyone knows the front man of the group. Nobody really knows who played the instruments and sang what songs.

My goal in making this film was to interview the original members who created this legacy of music – to document the untold stories of one of the greatest and most influential bands in American musical history. I believe I’ve done that.

M.O.I. JR: Did you try and contact Bootsy? Why was he not in the film?

Bobby Brown: I wasn’t able to schedule an interview with Bootsy. Unfortunately.

M.O.I. JR: The documentary talks about how drugs destroyed the group and left George Clinton penniless, but I often times wondered, if Parliament Funkadelic was drug free, would they have been able to put together such explosive stage shows and genre-creating albums at the caliber that they were?

Bobby Brown: George became relevant again thanks to rap artists sampling the songs of P-Funk. George continues to tour throughout the world.

He does numerous shows per year and is still generating income from the collaborations of many musicians we know as P-Funk. He owns a ranch in Florida. He’s still doing well financially.

Drugs certainly influenced that era but who knows? That’s like asking if Beethoven would have been a genius if he could hear. We’ll never know.

Documentaries, by definition, are life stories. This is the point of view, the experience, of the original members of Parliament and Funkadelic.

M.O.I. JR: Can you tell the people how Parliament Funkadelic got its name and the business move that proved the financial genius of George Clinton?

The kids that hung in George’s barbershop were intrigued by the older doo wop group. The kids were teenagers, 10-12 years younger in age. They eventually became the back-up band for the Parliaments.

Billy “Bass” Nelson was frustrated how the older members told him that he was just the back-up band to the Parliaments. Billy and the band were influenced by the psychedelic era of ‘70s music. Billy stated, “Everything is funky and everything is psychedelic. Let’s call our band Funkadelic.”

That move seemed to prove the financial genius of George. The Parliaments eventually ran into lawsuits shutting them out of the record business for years but with the creation of Funkadelic they never missed a beat.

M.O.I. JR: When does your film screen at the San Francisco Black Film Festival?

M.O.I. JR: How can people stay updated with you?

JR, thanks for your interest in “Tear the Roof Off – The Untold Story of Parliament Funkadelic.” Enjoy the screening on June 19 at 7:00. There’s gonna be a lot of “P” in the Boom Boom Room.