Heavy metal, since the death – or assassination – of the prolific and talented guitarist and frontman Jimi Hendrix, is for the most part seen as white boy territory in the U.S. paradigm of music, but Unlocking the Truth is a Black middle-school-aged trio from Brooklyn who are reclaiming what it means to be into metal – and millennium babies.

The Luke Meyer documentary about Unlocking the Truth called “Breaking a Monster” came out last Friday, and I think the documentary title is a good fit for a young band of this caliber.

“Breaking a Monster” interlaces Unlocking the Truth performing at the nation’s premiere music festivals like Coachella in Indio, California, South by Southwest in Austin, Texas, and the Heavy Montreal Music Festival with a series of interviews with the parents of lead singer Malcolm, who act as the group’s guardians; Unlocking the Truth’s manager, Alan Saks, known for his work with the Jonas Brothers and Disney; and the three band members, lead singer and guitarist Malcolm Brickhouse, drummer Jared Dawkins and bass player Alec Atkins.

The film is about a group of young Black musicians growing up while also pursuing a career in the music business. Through “Breaking a Monster” you get a glimpse into how theses youngsters’ brains have mapped the world differently than past generations. For example, before they get to LA to sign their recording contract, they are familiar with the streets through playing the video game Grand Theft Auto regularly. And Jared and Malcolm were influenced to play the music that they love by the heavy metal and rock that they heard in wrestling and Anime. 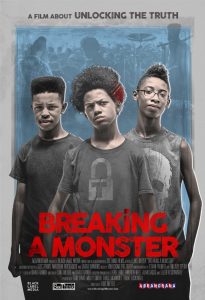 At one point in the movie they sign with Sony for almost $2 million but it’s for five albums. If you do the math, that is not much money when you think about all of the things that have to be paid when the pie is divided up, including the trio’s living expenses, costs associated with recording their albums, vocal training and coaching, management, wardrobe and the like.

“Breaking a Monster” documents the tension that all groups go through with their record company and management when the money is not coming in fast enough and things aren’t moving on schedule. I also witnessed the mind games that the manager tried to play with the group who mentally stayed on their toes throughout the film even though, during the period the documentary was recorded, Unlocking the Truth were barely teenagers.

I liked this informative documentary a lot, because of the insight on how the music business works behind the scenes and because Unlocking the Truth is a talented and innovative group that can really play.

Some of the stand-out moments for me were when the three group members at different times challenged authority and what they were being told and what was trying to be sold to them, as in the case of a video idea that the manager had written and was trying to impose on the group; they refused it. Another time was when Jared looked over the group’s recording contract at a meeting with management and Sony, and people started getting mildly irritated, including one of the members of the group who expected him to sign the recording contract because management said it was ok.

In my opinion, Unlocking the Truth may have a lot to learn about the music business, but I believe that them fighting for what they want and being cautious and thorough will pay off in the long run for them, and it is a good message for young people to pick up in a documentary about some teenage musicians.

Catch “Breaking a Monster” while you can at Landmark Opera Theater or Shattuck Cinemas in the Bay Area now. It opened on Friday, July 22.