On July 28, 2016, the San Francisco Human Rights Commission will be presenting the Frisco 5 with a Hero Award. While we appreciate the consideration, some of us cannot accept this award.

There are several reasons why we reject this award.

First, there is no more Frisco 5. Frisco 5 ended when the hunger strike ended. It was more than just the five hunger strikers. The Frisco 5 included a team of logistics and other supporters. After their hospital stay, the strike was over and the members chose to continue the movement in different ways. The baton was handed to the community and the Frisco 500 were born.

It has always been our intention to empower the community and especially the youth to reject City Hall’s policies and fight for a better tomorrow.

Under the leadership of Ed Lee, this city has failed our youth and left them with the threat of homelessness, unemployment, lack of opportunity, a failed education system, a high rate of incarceration for Black and Latino youth and the real threat of police terror.

It is insulting to us that the very administration who executes the will of developers and big business instead of the will of the voters would think that awarding us for fighting their failed policies would be acceptable. How can we accept such an award when our city is in a state of crisis?

It’s a crisis of epic proportions. Basic human rights are being violated on a daily basis in the City by the Bay, all in the name of profit. These violations are being asserted by the very administration that has decided to give us an award instead of solve the problems.

It has always been our intention to empower the community and especially the youth to reject City Hall’s policies and fight for a better tomorrow.

A majority of San Francisco residents are living in a state of fear – the fear of being one paycheck away from hunger, the fear of developers displacing them, the fear of rising crime rates as a result of income inequality in a city with the highest cost of living in the nation.

There is the very real fear of being a victim of police terror. San Francisco’s police department has committed crimes against the community in the form of racist text messages, sexual exploitation of under-aged sex workers and murder, with impunity.

Every day a new crime against the community is revealed and the SFPD know they will never face charges from the DA. They know that the SFPOA will support them in their heinous acts and even bully those who dare to challenge them. Yet as this paramilitary organization occupies our city, the mayor stays silent.

San Francisco’s police department has committed crimes against the community in the form of racist text messages, sexual exploitation of under-aged sex workers and murder, with impunity.

We cannot accept this award. We are too busy working to correct the wrongs of Mayor Ed Lee. We are too busy empowering our youth to use their voice and fight for their future. We are too busy making sure greedy landlords and developers are prevented from evicting 100-year-old residents from their homes.

City Hall has tried to throw us a bone; we say no. Ike Pinkston, Ilych “Equipto” Sato, Edwin Lindo, Max Leyoung and Yayne Abeba of the Frisco 5 reject this award. This is not about accolades. This is about moving forward and working with our community to feed the hunger for justice that remains in this City.

This is not about accolades. This is about moving forward and working with our community to feed the hunger for justice that remains in this City.

Media spokesperson Yayne Abeba can be reached at yayneabebaw@gmail.com. 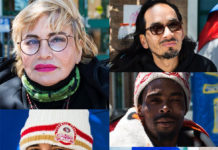 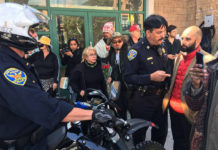 Hungry for justice: Equipto speaks for the Frisco 5 on hunger strike to demand SFPD Chief Suhr be fired or Mayor Lee resign